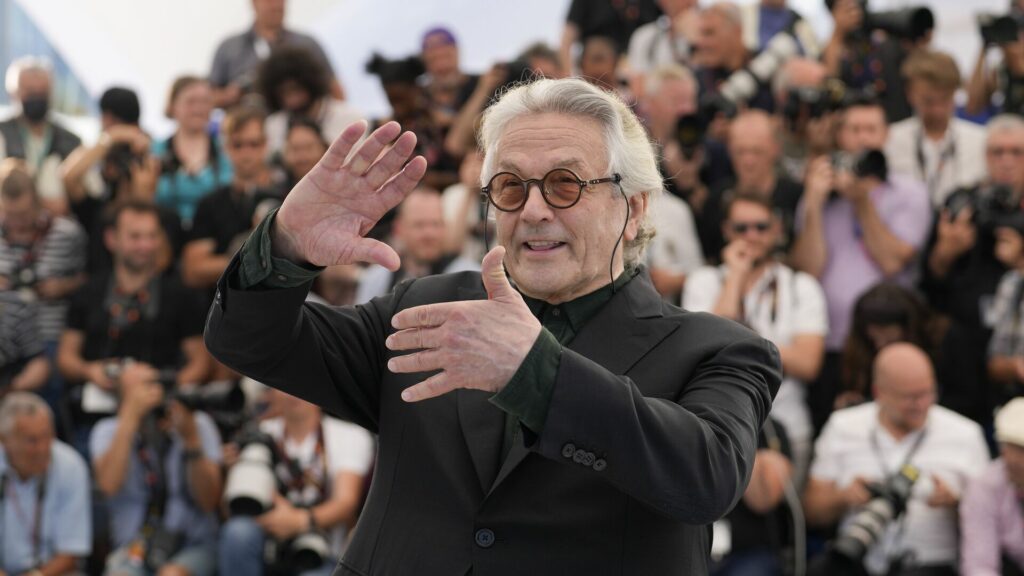 Director George Millar poses for photographers at the photo call for the film 'Three Thousand Years of Longing' at the 75th international film festival, Canne on 21 May. Photo: AAP via AP Photo/Petros Giannakouris

The film that was shown at the Cannes Palais theatre was not only directed by Miller but he also took a role in co-writing the script with Augusta Gore based on the AS Byatt short story The Djinn in the Nightingale’s Eye.

Starring British actors Tilda Swinton and Idris Elba, the film follows a lone academic played by Swinton who finds a bottle in an Istanbul market which releases a genie (Elba). Much of the film’s action takes place in the room where mystery/crime writer Agatha Christie wrote her bestseller Murder on the Orient Express.

Variety magazine described as a “love letter to storytelling and its tropes parables passed down through history. The genie Elba recounts the stories of the those who found him in the past.

The magazine said the Cannes audience had enjoyed the rapport between Swinton and Elba as their characters argued over the merits of wish making but the film does develop into a “bittersweet love story”.

“This is the first time I’ve seen the film with an audience and it is very moving. I am very, very grateful,” Miller told the Cannes crowd.

The director last came to Cannes in 2015 with Mad Max: Fury Road which went on to earn $374 million around the world and which was nominated for 10 Oscars including for best picture and best director. It won six awards.

Mr Miller, 77 was born to Greek immigrant parents Jim and Angela Miliotis. His father Jim (Dimitrios). was born on Kythira. His mother Angela’s family fled Anatolia and came to Greece in 1923. The couple married and settled in Chinciilla, Queensland where they raised four sons, fraternal twins George and John, Chris and Bill.

Miller attended Ipswich Grammar School and then Sydney Boys High School. With John, he went to study medicine at the University of New South Wales. In his final year, 1971, he made a short film with his younger brother Chris which won first prize in a student competition.

In the same year he met Byron Kennedy at a film workshop at Melbourne University and the two men went on to form a production partnership, Kennedy Miller Productions.

His first feature length film was Mad Max a film that he penned with James McCausland and which was financed independently by Kennedy Miller Productions to become a big international hit with a cult following. The film turned into a successful franchise culminating in 2015’s Mad Max:Fury Road, the fourth in the series.

Miller married Margaret Sixtel in 1995. The couple have two sons. He has a daughter from his first marriage which was to actress Sandy Gore.