Odrysian Kingdom: a rough diamond in the ancient world 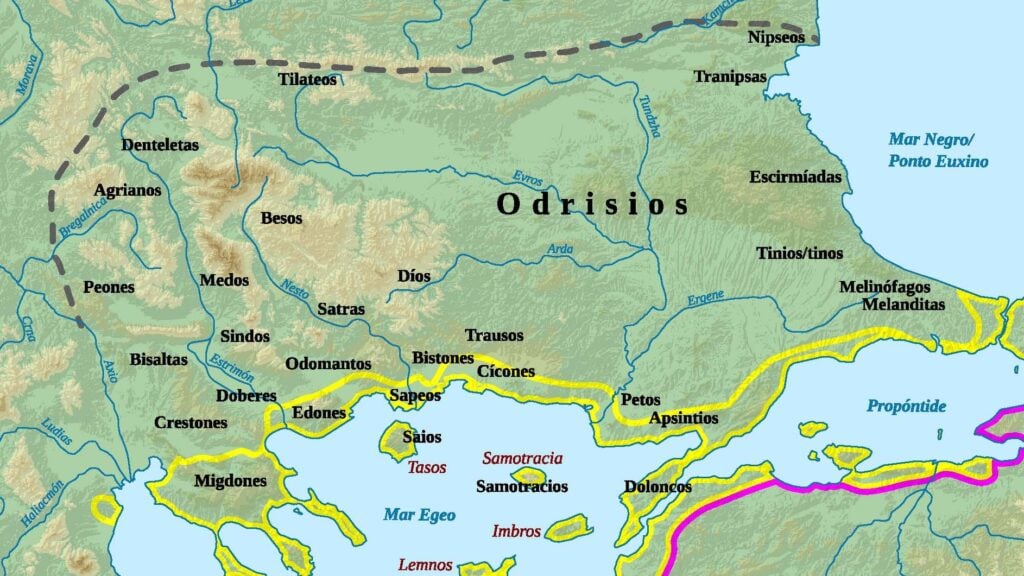 I occasionally come across a rough diamond. That unique story that is hidden or shaded by other more prominent histories of the Balkans. The ancient kingdom of Odrysia is an interesting one and certainly a rough diamond, from the area of ancient Thrace and one which lasted for approximately two hundred years, from the fifth century BC. Their territory took in the coast all along the Black Sea to where the Danube is met and along the western river to the meeting point of the Strymon River back down to the edge of the Aegean. Note that the immediate land on the Aegean belonged to Greek powers. Thucydides, the great writer, himself owned land near Abdera which faces Samothraki island, not far from the border with ancient Macedon.

And true to form, I have travelled across what would have been called Odrysia. Let me tell you a wee bit more of what I discovered on my travels.

Odrysians were not out and out Greek people, far from it and few people would claim that, certainly not in Bulgaria. Though many including the royals ended up being Hellenised; at various stages parts of Odrysia was of course conquered by Hellenes, whilst numerous Greek colonies appeared in their territory. Therefore they have made an appearance in the book, From Pyrrhus to Cyprus Forgotten and Remembered Hellenic Kingdoms, Territories, Entities & a Fiefdom. They were also deemed to be ally of Athens during the Peloponnesian War with no significant contribution that generates attention from historians.

Unlike the Illyrian Tribes who constantly harassed Epiros and were harder to Hellenise, Thracian peoples such as Odrysians seemingly absorbed the Greek language and many Hellenic customs more readily as they came into constant contact with the Greeks. In fact, historians are able to piece together the story of Odrysia via Greek coins and writings. Unlike the Greeks, Odrysians tended to gravitate to inland entities rather than the coast and ocean and many wore trousers.

The dozens of Greek colonies that were established by Hellenes along the Black Sea, including Odessos and Messembria, contributed to the spread of Hellenism and commerce. Recently I was in Messembria in Bulgaria and had the pleasure of spending a day at Nessebar where you can still view ancient pillars and ruins from the period. Odrysia City is now known as Edirne in Turkey and was the first European capital of the Ottoman Empire, in 1363.

Commencing as a union of tribes, the Kingdom emerged in the Fifth Century based around Odrysia City, the biggest Thracian city. They gained strength and grew as an outcome of the failed Persian invasion of Greece in 480/79 BC. Their first king according to Thucydides was Teres I between 460–445 BC and he united 40 Thracian tribes.

Philip II defeated the kingdom in 341 BC and notably established Philippopolis, today the impressive city of Plovdiv close to the geographical heart of Bulgaria. Whilst the kingdom came under Macedon, there existed co rulers from Thrace, notably Seuthes III who created the Hellenic city of Seuthopolis in 320 BC. The city used Greek architects and engineers to reflect a Hellenic polis. Seuthopolis was one of the most impressive and wealthy cities of the epoch and it became the capital. The city’s ruins were discovered in 1948 by Bulgarian archaeologists in the Stara Zagora Province. The Palace in the city was a sanctuary for Gods from Samothrace and the city was home to Thracian and Greek people. Sadly, the city was destroyed by Celts in 281 by which time the Odrysian kingdom became fragmented into several parts and under different spheres of influence.

Lysimachus, who was a trusted general under Alexander, took the Kingdom by the turn of the century though he was more focussed on fighting his fellow Diadochi (Alexander’s generals). By 280 Lysimachus had been defeated in battle and his rule was taken by Pergamum of Asia Minor.

Until the arrival of the Romans in 146, Odrysian rulers co-existed with an overall Hellenic King from Pergamum or Macedon. Historians Polybius and Livy tell us that Cotys IV was possibly the last recognised Odrysian King and he fought in the war against the Romans under King Philip V of Macedon. It is possible Odrysia survived until the next century as a vassal state of Rome, though there is not enough evidence to quantify to what level they were a state.

Thucydides had written in the Peloponnesian War accounts how he felt that people who are at the fringe of the civilised Greek world are barbarians. It is fair to say that by the third century BC, coastal (especially) Odrysians were very much part of the Hellenic world, with their elites adopting Greek customs, administration carried out in Greek, the widespread use of the Greek alphabet. A diamond in the rough of what had been considered barbarian lands in ancient times, the Odrysian Kingdom is certainly worth exploring.

*Billy Cotsis writes history including the new title, The Aegean Seven Take Back The Stolen Marbles.