Reading Greek epic through another massacre

Professor Joel Christensen looks to the Homeric sagas for answers to the massacre of Black Americans in Buffalo and the slaughter of 19 children and two teachers in Texas and other shooting massacres by young men in the U.S. 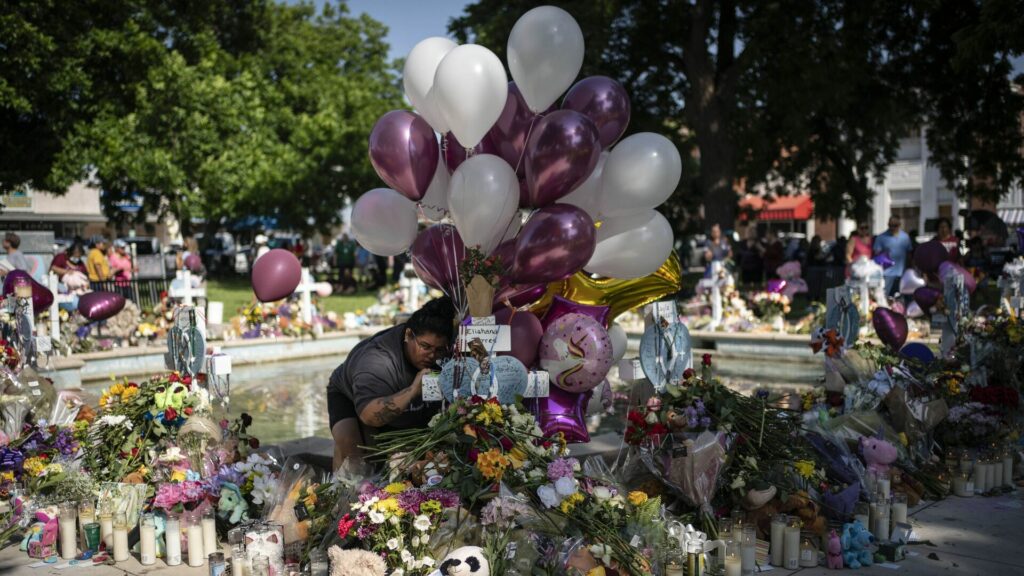 McKenzie Hinojosa, 28, writes a message on a cross for her cousin Eliahna Torres, at a memorial site for victims, including her cousin, killed in the Robb Elementary school shooting, Saturday, May 28, 2022, in Uvalde, Texas. Photo: AAP via AP Photo/Wong Maye-E

In the U.S., the past two weeks have seen the white supremacist massacre of ten Black Americans at a supermarket in Buffalo, New York and the slaughter of 19 children and two teachers in Uvalde, Texas, with nearly as many injured. On the surface, these horrifying events have several things in common: two young men (both 18) using powerful weapons (AR-15) in public, ‘safe spaces’.

As long as I have studied Greek epic, I have also been watching slaughters unfold in the media. From the shock of Columbine when I was an undergraduate to the abject, stomach-wrenching horror of Sandy Hook when I was a first time parent and young professor, my professional interest has been paced by the reality of violence in the world around me. What does Greek epic have to do with the mass murder of innocents in the U.S., nearly three millennia after the epics were composed? With each new spate of violence, my answer has grown more certain.

Ancient Greek myth is in part about the danger of too much power invested in individual men and the harm that praising their deeds can do to others. These killers have been shaped by dangerous ideas and have played out a pattern in public because of them.

My claim that Homeric epic has something to say about mass murder may seem indulgent at first. Resistance to the idea is due to the way most people hear about Greek myth. We teach the heroes as entertaining stories, often imagining that by calling an ancient figure a ‘hero’, we mean the same thing as with the modern word.

To a modern ear, a ‘hero’ is something good: someone who protects the vulnerable, who fights for what is right even to the point of self-sacrifice. For the ancients, in contrast, a ‘hero’ was anyone from the last generation to cavort with the gods: a mixture of demigods (Achilles, Aeneas, Herakles) and powerful leaders (Agamemnon, Odysseus) who participated in a series of conflicts that marked a kind of conceptual boundary between the mythical and historical pasts.

Poor readings of the Iliad and the Odyssey fail to acknowledge what the epics so clearly say.

These heroes inhabited many characters, and few of them were simple. In Homer, however, there is a common trait: heroes kill people. As the Homerist Erwin Cook observes, heroes are marked out for their capacity to suffer and cause suffering in others. The famous Herakles killed his children and wife and slaughtered countless others on the way to his eventual apotheosis. Poor readings of the Iliad and the Odyssey fail to acknowledge what the epics so clearly say.

Achilles’ rage sent thousands of Achaeans to their deaths. Odysseus tried to save his men and failed only to come home and kill over 100 suitors in his house and then mutilating and murdering the enslaved people who were not loyal enough in his absence.

Why does Achilles rage? In book 1 of the Iliad, he gets into an argument with the leader of the coalition and is stripped of his war prize (the woman Briseis). In response to losing what he believes is his, Achilles throws an epic tantrum and uses his connection to the gods to ask Zeus to ensure that his own people die to pay for not honoring him correctly. When his companion Patroclus is one of these casualties, he falls into another rage, taking his loss out on the Trojans and Hektor. Odysseus, too, comes home to find his place in the world changed and enacts a vengeance that even the epic presents as problematic. When he closes all of the suitors in his home, unarmed, and begins to pick them off, he is no less monstrous than the Cyclops who made him famous.

When I read the Homeric epics now, I see their shared movement from the semi-divine Achilles to the returning, though mortal king Odysseus, as a rumination on the excessive pain men with great and unchecked strength can bring to those around them. Achilles’ victims are untold and unnamed masses of Trojans and Greeks; Odysseus brings death to his own people twice, first in failing to bring his warriors home and then again when he kills the young men who were gathered in Ithaca.

What’s a story got to do with it?

Whether we are talking about killers motivated by racism or misogyny, a common thread in American mass killing is a rage emanating from a sense of displacement. The white supremacists and islamophobes act on manufactured fears of replacement and anger at people who don’t look like them having basic human dignity; misogynists lash out because they think they have been deprived some access to or control of women. In a pathetic but no less destructive way, these young men are acting out the tragic events of mythic heroes without understanding that those stories are supposed to be warnings.

Columbine somehow became a paradigm for others who felt displaced or isolated to follow, lashing out in their anger, and attempting to create a new place for themselves by harming others.

Yet this rage is also paired with inspiration found in previous killers’ actions and an expectation of infamy to come. From the shared contents of the manifestos of the murderers in Norway (2011), New Zealand (2019) and Buffalo (2022) to the professed and proposed inspiration of the Columbine school massacre on the perpetrators of horrors at Virginia Tech (2007), Sandy Hook (2012), Parkland, Florida (2018), to name a few, there’s a narrative connection driving the horror.

Stories help us understand what is possible. The Homeric epics are keenly aware of this, as they state on several occasions that their own heroes try to understand what to do and how to behave in the world by learning from the stories of prior generations. Achilles’ ‘tutor’, Phoenix, criticizes him in book 9 of the Iliad for not learning from the stories they have heard. But part of Greek epic’s message is that stories don’t always do what we think they should do. As I argue in The Many Minded Man, Odysseus uses stories to manipulate and use others.

Stories shape mass killing in different ways: the poisonous screeds of racist and misogynist hate combine with the internet fame of mass killers. Columbine somehow became a paradigm for others who felt displaced or isolated to follow, lashing out in their anger, and attempting to create a new place for themselves by harming others. Achilles notes in the 19th book of the Iliad when he tries to reconcile with Agamemnon, “the Greeks will remember our conflict for a long time,” but he fails to account for what people will do with the story.

There’s danger in taking a simplistic approach to stories. Our responses to mass killings follow a script as nearly formulaic as epic language. Sometimes it gets absurd–as with gun-rights activists claiming that the problem in Uvalde was that the school had too many doors. But most of the time the same themes emerge: the shooters are ‘mentally ill’ and would kill people anyway; we need ‘good guys with guns’ to combat the bad ones. We don’t talk enough about how publicizing the shootings turn them into narratives that can be misused and have unintended consequences. We have made some progress in the US by talking more about the victims and less about the perpetrators, yet the awful model of killing others for personal glory remains.

The U.S. is not alone in the world in suffering mass killings motivated by conspiracy theories, twisted cultural prejudices, and rage against displacement. We are alone, however, in how we respond. After the Dunblane massacre in 1996, the UK radically changed its gun laws. Norway put restrictions on some semi-automatic weapons after the 2011 terrorist attacks. And New Zealand promptly responded to the Christchurch Mosque Shootings. Yet less than a decade after the school shootings of Columbine, the U.S. lifted its assault weapon ban. Our mass killings have tripled in frequency in the two decades hence. Most of the killers have used AR-15s. Nearly all of them were on the cusp of adulthood.

Young men casting about their place in the world, expecting success and rewards, and feeling deep, faith-shaking disappointment at not finding it is part of the narrative tradition that goes back to the Iliad and the Odyssey. The epics’ stories should function as warnings of granting anyone the power to cause so much carnage because they feel out of place or cheated. Careful study of ancient narratives can help us understand that no amount of wealth, subjugation of others, or glory will fully allay our feelings about mortality or dissatisfaction with life’s imperfections.

And they also tell us how terrible it is to lose someone you love. Achilles’ mourning for Patroklos, Priam’s sorrow over Hektor, both epics’ repeated reflections over the life-wrecking pain of the loss of children all try to help us understand that selfishness and violence will only serve to steal from life what is most precious. A central message of both Homeric epics is that prizing the individual brings harm to the collective. Our chief narratives in what some call the ‘west’ since have largely been about individual glory to the detriment of the common good.

After years of living alongside Homeric epic and mass violence, the message seems pretty clear to me: people will always perpetuate hate or suffer loss and disappointment, and, yes, some will struggle with the passions of youth and the ups-and-downs of mental illness. We can have compassion in each case, as long as life continues. But we can keep everyone safer by taking their power to harm others away.

* Joel Christensen is Professor and Senior Associate Dean for Faculty Affairs at Brandeis University. He has been a Fellow at the Center for Hellenic Studies (2013) and has received the Society for Classical Studies’ Award for Excellence in Teaching at the Collegiate Level (2013). He has published extensively and some of his work include “Homer’s Thebes” (2019) and “A Commentary on the Homeric Battle of Frogs and Mice” (2018). In 2020, he published “The Many-Minded Man: the Odyssey, Psychology, and the Therapy of Epic” with Cornell University Press.