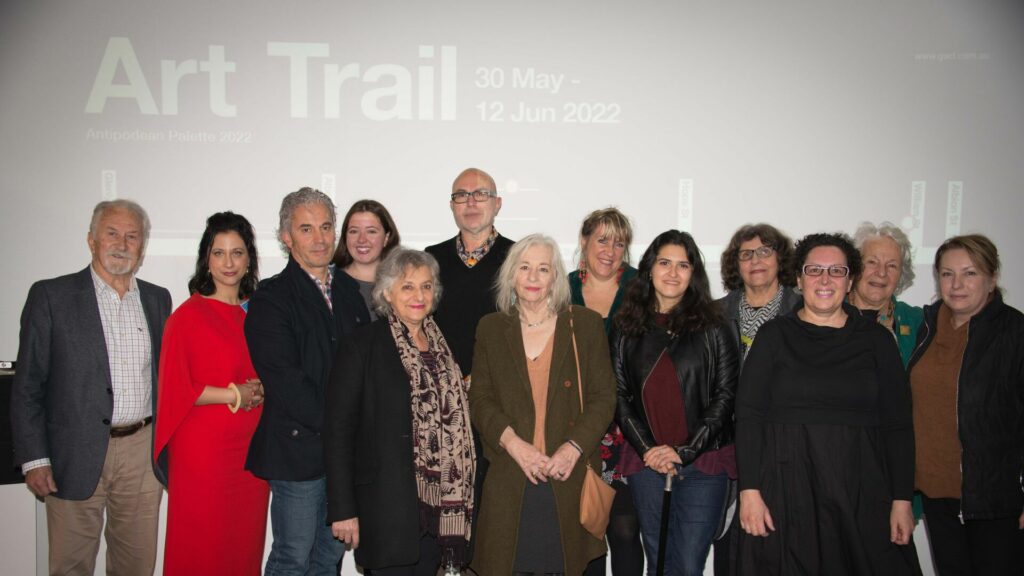 Artists and organisers at the launch of the Antipodean Palette's Art Trail which will be on view on the streets of Brunswick until 12 June. the event is organised by the Greek-Australian Cultural League. Photo: Supplied/GACL

If Greek-Australian culture is going to survive, then it needs to be neither reactionary, that, is responding solely to stimuli emanating from Greece or the mainstream, nor mimetic. Instead, it must be rooted within the local environment in which it is engendered and thrives. Only when it responds to the places where we interact and live as Greeks, whether in thought, deed, praxis or memory, can we really claim to be creating something unique and authentic.

It is for this reason that the Greek-Australian Cultural League of Melbourne’s annual Antipodean Palette is particularly inspiring. This year, in recognition of the fact that we are, after over a century-long presence in this city, an indescribably diverse and multi-faceted tribe that defies stereotypes and exhausts superlatives, there is no over-arching theme or a prescribed subject to which artists are called upon to direct their craft. Rather, each artist, showcased from the carefully compiled Greek-Australian Artists Directory, an important archive of Greek Australian art practice in Australia, has been permitted to display the artwork that forms a natural expression of their own visual language.

In keeping with previous practice, the Antipodean Palette this year, has dispensed with the traditional display of art in galleries. Instead, in Art Trail, participating artists have their artwork displayed on large posters in the urban landscape of one of the most iconic suburbs of Greek settlement in Melbourne, that of Brunswick. Modern-day Brunswick is not the area it was when Greek migrants began to settle there in large numbers. Yet it has always been home to migrant communities and even as the Greeks’ presence there is not as pronounced or vibrant as before, it is still strong, and memories linger. Placing the artwork along Sydney Road and its intersecting streets and inviting the viewer to traverse those streets in order to discover and appreciate the work is a galvanising experience, one that provides insight not only into the interior world of the artist but also allows one to experience the sights, smells and sounds that inform their everyday existence as Greek Australians living in Melbourne.

A hipster passing by, clutching a latte; An old, black-clad grandmother trundling her shopping cart ever so slowly along the undulating footpath; The frustrated veil-covered lady pulling her squalling children away from the road; The careworn old Greek man emerging from the local TAB; The sounds of the bells ringing at Saint Basil’s: all these and so much more constitute the framework around which our inner world is made exterior. There can be no greater paean to our existence than to place our art alongside the people who have created and maintain our community.

The artwork itself is superb and though-provoking. Katrina Ginis’ oil on paper composition Memory is particularly arresting. An exploration of the concept of involuntary memory, which can be triggered by sensory experiences such as sights, sounds and smells, her depiction of a votive oil lamp on a crocheted doily is a profound mediation on use of “signs” to understand and communicate ultimate reality, as well as how art triumphs over the destructive power of time. Of Asia Minor descent, the artist’s work, displayed on the 100-year anniversary of the Asia Minor Catastrophe is not coincidental. What at first sign appears to be one doily are actually two: a “clean” white one and a “soiled” brown one, which is receding to the margins of the painting. Their designs are not identical suggesting we are dealing with two sets of narratives and encoded languages of symbolism. Both are crumpled but the “soiled” one is ever more so, rendering an appreciation of its design more difficult. Is this “soiled” doily a narrative of memory, while the “white” doily symbolises contemporary experience? If so, it is significant that the “brown” doily, though ostensibly marginal in its position in the painting, is placed on top of the white doily, possibly intimating that it is this narrative of the past, however unintelligible or unpalatable that dominates our present discourse.

While the painting appears as a still life, there is something dynamically disconcerting in its dynamism that borders upon the surreal. There is light emanating from the votive lamp that is, in Orthodox practice lit before icons or images of the departed as a means of veneration. Yet it is not apparent whence this light is derived, as the lamp has neither oil, nor a wick, rendering the source of the flame debatable. Is illumination self-generated or self-delusion? Are the explorations we seek to make of our past, or our attempts to draw our identity from it rather than rooted in authenticity and proximity, instead self-referential and a parody?

A similar tension is created in the positing of the carnations, a flower associated with the point in which life and death meet, which is why it is traditionally used to bedeck the Good Friday Epitaphios. There appear to be more blooms, albeit immature and unopened on the “white” doily that on the “soiled” doily, whose blooms are darker, more mature and recede into the shadows. As a meditation on permanence, eternity and our interrelationship with the liminal spaces within our identity, the questions encoded within the composition exist in conversation with the overall rational behind Antipodean Palette, making this artwork, in my opinion the stand-out piece.

Of all the artists participating in this year’s Antipodean Palette, Efrossini Chaniotis is perhaps the most “native” since her creative studio, in which many of her artistic explorations took place, was situated in Brunswick. Her work, the Painted Sculpture, 2022 is thus a homage to that artistic journey, in which her memory of her own mother’s experience as a partner is intertwined. Highlighting the polyvalency of physical places and the manner in which their image can be interpreted depending on the lens through which we view them, it was the artist’s mother that saw in her daughter’s studio, a reminder of Mykonos, her father’s homeland and the artist set about recreating her studio in homage to that vision. Efrossini Chaniotis no longer occupies that Brunswick studio and she has removed though retained her decorations. Her father, an authentic artefact of Mykonos had already passed on when the studio was decorated. Yet indelibly in her art, Brunswick can no longer be seen as separate from Mykonos, or indeed from the artist’s creative vocabulary and her artwork, a syncretic conglomeration of motifs from Mykonos that compound upon each other are a fitting paradigm of the multicultural condition.

Kalliroe Tsiatis: Moreland City Fairy Tales, seemingly divests itself from the need of a lens with which to comprehend the locale. Her subject is a lady visiting Coburg Lake, a short distance from Brunswick and still in the same municipality. While the artist claims to discard manifestos, definitions and categories and seeks merely a human connection, what she portrays has a colossal monumentality to it, reminiscent of the seated Greek statues of the Archaic Period. However, we should take which ever influences inform these choices in depiction with a grain of salt. After all, as the artist has taken pains to inform us, we are looking at, or indeed without realising it, have been made part of a fairy story.

Masonik’s bleak collage Bloom exploring the impact of unchecked growth of whatever nature is a stark visual fable warning against excess. Employing an almost brutalist visual lexicon, the brooding, sterile shipping containers and looming concrete edifices juxtaposed against an azure, cloudless sky exist in dialogue with another visually symbolic interlocutor: the stark imagery associated with disverdant rock Greek islands also thrust against the immenseness of a sky of similar hue. Connecting windows into communicating worlds are made, challenging our understanding of proximity and cultural affiliation as this pertains to memory.

Just how important the Australian landscape is important in the fashioning of one’s Greek identity is a theme explored by James Pasakos in his: Buoys and Westgate. While travels and journeys are endemic to the migrant experience, the fact the artist has chosen to depict a structure upon which so many Greek migrants laboured, whose permanence is a vexed question considering its history, is noteworthy. The composition is thus a telling example of how the local environment can be suborned by the artist in order to make a statement about the ephemerality of identity, memory and migration. This is a concept explored also by the other participating artists, Joy McDonald, Yanis and Constantine Nicholas.

Ultimately, the question of what makes an entity definable and recognizable over time, establishing or deconstructing identities, is at the heart of each participating artist’s contribution. By choosing to have their art respond to but also to have an impact upon the local urban landscape as well as to enjoin the viewer to embark on an interactive experience with them, in which all their senses are engaged, the Greek-Australian Cultural League, through Antipodean Palette’s Art Trail are forging pathways for future interaction between hybrid spaces, encouraging the formation of parallel and novel discourses that challenge the conventional and highlight the spaces in which we are, most often unconsciously, ourselves.

Where: At key intersections along Sydney Road (including Glenlyon Rd, Victoria St and William St), Brunswick.