Part of Dr Phil Kafcaloudes’ family story in Australia begins in early 20th Century Darwin. He recently returned to the city to locate a landmark building his grandfather built that was strong enough to withstand Japanese bombs but not the passage of time 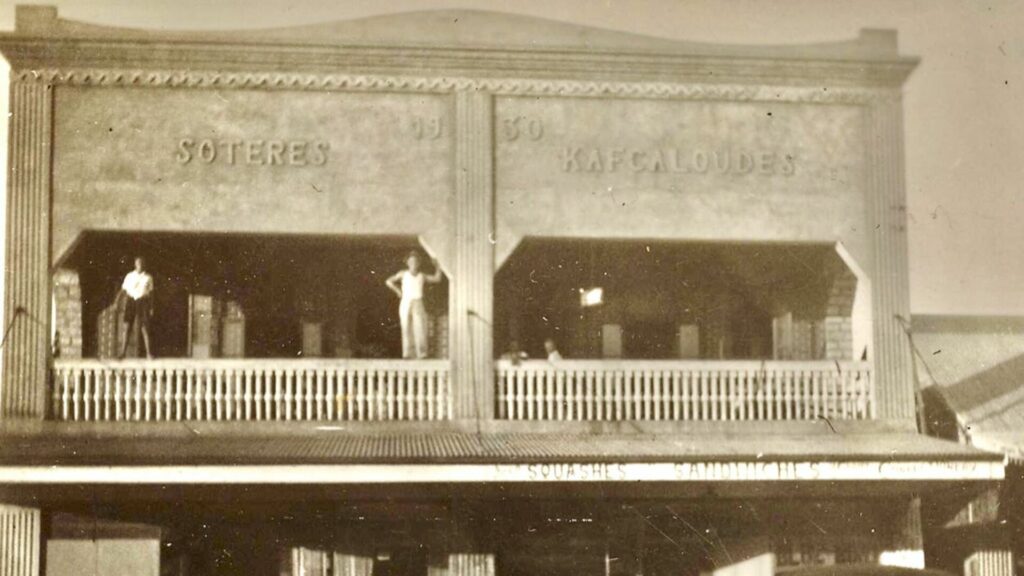 In 1917 my father’s family arrived in Darwin from Kastellorizo as part of a federal government program to import Greeks to help on the Darwin to Tennant Creek railway.

Soteres Kafcaloudes worked as fettler on the line and, like many other immigrants, came to the job with no experience in fettling. He had been a baker and confectioner on the eastern side of Kastellorizo’s quay and that was where his experience ended. The skills he learnt in the Northern Territory heat were to change his life and the lives of his children.

With the money he saved working on the rail line he bought land in the now-unknown Wireless Hill on the Darwin outskirts and set about becoming a builder.

Over the next decade he took small commissions including a stint as a supervisor on road construction gangs. He also learnt how to extract and dress ringstone from a quarry he leased at Myilly Point, near what is now the Cullen Bay marina.

His dressing work must have been of an impressive standard because he and Darwin identity Harold Snell were offered a co-commission to build Darwin’s post office. Although the post office contract was a significant achievement for a new building company, Soteres had plans for something he would consider his great enterprise, a two-storey building that he intended would be a retail and commercial landmark the middle of the town.

In 1925 Soteres started his quest. He purchased a plot on Cavenagh Street, just a few doors up from Bennett St. He excavated and dressed large stone slabs which he and his sons, daughters and wife Papathia all worked to build what was one of the largest buildings in the area. His son Steve was to describe the construction as “terrible seven years’ hard work”.

Dad’s wish was to erect a building to show how a confectioner turned stonemason could achieve by grit and endurance and can uphold a man’s worthiness.
– Steve Kafcaloudes, 1994

There’s no doubt also that Soteres wanted this message to be shown to all of Cavenagh St for perpetuity. He had his name put across the front of the building, spread broadly across the top of two shopfronts high above what was then one of Darwin’s main thoroughfares.

Soteres also bragged that his building was so solidly built that it would be able to withstand anything the notorious Territory conditions could offer. In an example of over-engineering, the walls were extraordinarily thick with the stone slabs bigger than necessary to support the two storeys.

Apart from the wet season deluges, the building was to have its first big test when the Japanese bombed Darwin during WWII. The building survived the repeated attacks, but it was still the subject of a war reparations claim by Papathia (the nominal owner of the building). The photographic evidence offered in support of the claim suggests the building was hardly damaged while the buildings surrounding it were all but destroyed.

The building was leased to various tenants, giving income to the Kafcaloudes family:

It was divided into four sections on the ground floor. One was let to a Japanese haberdashery merchant, Mr Nakashiba, the other a cafe/ and restaurant and milk bar which was managed and serviced by the family. My sisters and I ran it for about seven years, until my parents decided to sell it to Albert Hong, and move to Brisbane.
– Steve Kafcaloudes, 1994

Some years after the war the solid two-storey facade disappeared. The lot next door was razed and a small road, Litchfield St, was built next to the building. Kafcaloudes family folklore says that it was around this time that the building was incorporated into the Don Hotel which became a casino in later years, was closed and then re-opened to operate as the present-day Cavenagh Hotel.

In May 2022 I tried to trace the original Kafcaloudes building to see if there was any of it left. I started by questioning the claims of that the Kafcaloudes building was ever part of the Don Hotel. I spent an hour with the current hotel’s manager Steve Kotz, who told me he had no idea if the story was true or not. Darwin city archives seemed to raise conflicting evidence, including photos of the Don Hotel immediately after the Japanese bombing.

Then I noticed a detail in the photo of the Don Hotel.

At this point the photographic evidence started to give more answers. A grainy photo of the Kafcaloudes building in an old history book listed referred to my family’s building as “the SECOND Don Hotel”. That explained much. Two Don Hotels. That would explain the conflicting evidence. But I still needed more than a caption. Then I found a wartime town plan for Darwin which listed the Lot numbers, and helpfully, some bureaucrat at the time actually wrote the names “Kafcaloudes building” and “Don Hotel” in the allotment squares.

So mystery solved. The original Don Hotel was replaced by a second building which covered both Soteres’ lot and lot next to it.

This means that somewhere in the existing Cavenagh Hotel may be the remains of the Kafcaloudes building.

From my calculation any remnant must be near the current swimming pool and budget accommodation area which abuts Litchfield St.

George Frazis from Charles Darwin University’s Greek studies unit says he’s seen some of the original stone wall. If it is still there it would be a poignant piece of Darwin’s Greek history, and tribute to the family who slaved for seven years to leave a landmark that Soteres hoped would stand forever. Nearly a century later it still might be.

* Dr Phil Kafcaloudes is an author, broadcaster and academic. His fourth book, Australia Calling: The ABC Radio Australia story is being released in July.