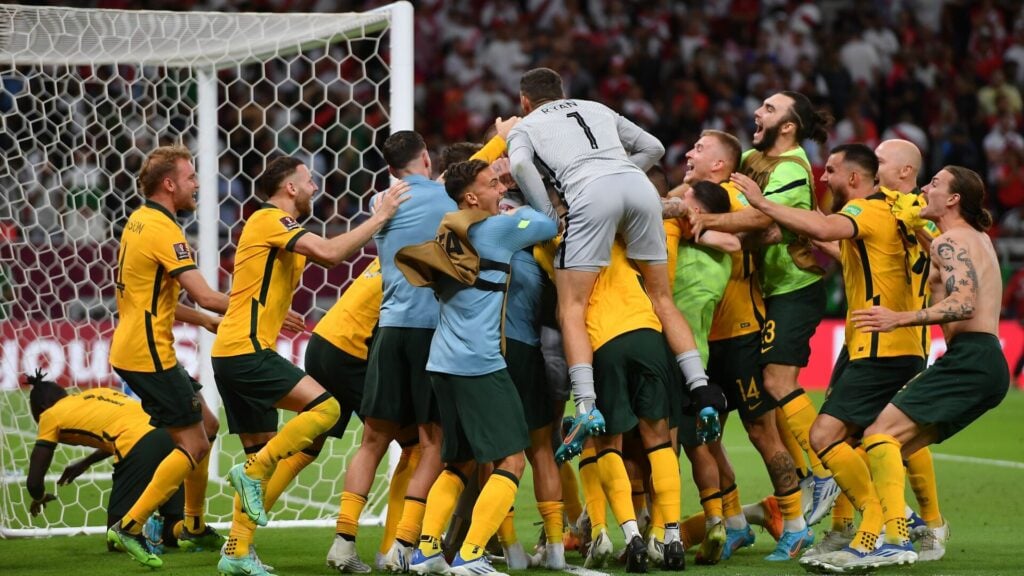 Graham Arnold’s Socceroos confounded not only Peru but the critics, as his team booked their place in the fifth consecutive world cup final and, in the process, earning a $17 million payout.

Monday’s 5-4 penalty shootout win in Doha, Qatar, has ensured the Australian team will earn a $14 million appearance fee for appearing in the group stages of the Fifa World Cup finals in November and a just-under $3million qualification bonus that will cover travel and accommodation costs during the tournament.

This year’s world cup finals in Qatar are the richest in the tournament’s history with $700 million (or Australian $1billion) set aside for the tournament.

In the game against Peru on Monday, Arnold’s critical decision in the dying moments of open play to take off goalkeeper and team captain Matt Ryan and replace him with the virtually untested Andrew Redmayne was to pay huge dividends.

Redmayne, 33, who once tried for English Premier League team Arsenal, had just three national caps, with his last game for the Socceroos against Nepal. But he was an unknown factor for the Peruvians, a fact which Arnold skilfully exploited.

“He is a very good penalty saver and to try to get in the minds, the mental aspect of Peru to add a little bit of uncertainty in their brains. That was the reason why (he was brought on),” said Arnold whose position had come under fire when the team failed to automatically qualify for the World Cup finals.

“They (Peru) were probably asking themselves the question, ‘Why is this guy being brought on, he has to be good'”.

The Sydney FC keeper jumped about the line as each Peruvian took their kick and one of them, Luis Advincula, hit the post. Redmayne attained legendary status when in the sudden-death stage of the shootout, he saved Alex Valera’s penalty to give Australia the victory.

Redmayne praised his team’s effort during the game. He had come on late in extra time after Matthew Ryan had kept Peru out for much of the game.

“I’m no hero. I just played my role like everyone else did tonight,” Redmayne told the ABC after the match. “I can’t thank the team enough, the staff enough. You know, I’m not going to take credit. The boys ran out 120 minutes, and it not only takes 11 on the field but the boys on the bench, the boys in the stands.”

Before the final World Cup Qualifier knockout match, Arnold said that he had wanted to bolster the defence which had conceded “sloppy” goals in the past and it showed in the 120-minute battle of attrition in which neither side was able to penetrate the other’s defences.

While Peru had slightly more time with the ball, 54 percent possession and a higher pass count, 662 passes to the Australian’s 583, the teams were evenly balanced.

During open play, Australia had 11 shots on goal, with two shots on target. Peru had 10 attempts on goal of which one was on target.

Australia had just three corners to Peru’s two, during the entire game.

Ajdin Hrustic’s effort in the 81st minute was the first goal-bound effort by either team and was saved by Peruvian goalkeeper/captain Pedro Gallese.

Peru substitute Edison Flores was on target in the first period of extra time but for the goal post getting in the way.

Aziz Behich came close with a long-range effort and Hrustic again came close to score in the 88th minute but Gallese again frustrated him.

The stalemate continued into extra time and Arnold gave the nod to Redmayne to take over in goal in a decision that proved to be the difference in the end.

“I am so proud of the players, no one knows what these boys have been through to get here. I believe this is one of the greatest achievements ever the way we had to go through things – 20 world cup qualifiers, 16 away from home. It’s been tough, but we did it.” Arnold said.

The game was played in temperatures that exceeded 30C at the Ahmad Bin Ali Stadium which boasts a state-of-the-art air-conditioning system to cool players and spectators.