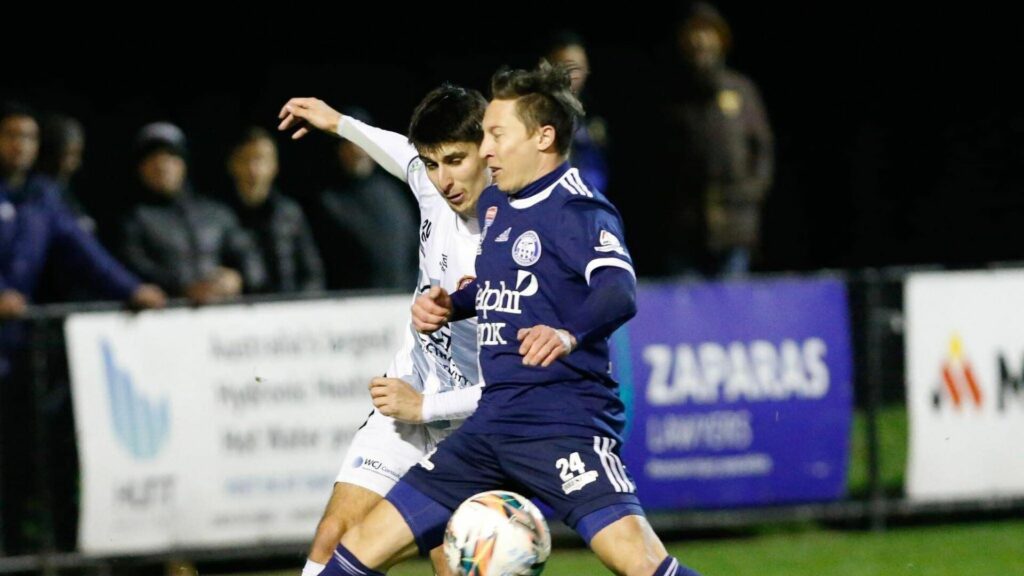 South Melbourne manufactured a strong win against Hume City to go back-to-back for the first time in a month, protecting their four-point lead in first for another week.

“Hellas” secured an important three points in the Victorian NPL’s 18th round, with Oakleigh finally breaking their winless run to keep with them in the premiership race.

A strong first half was enough for Heidelberg United to defeat Melbourne Knights 3-2 at home on Sunday evening, allowing “Alexandros” to break into the top six.

South Melbourne bagged a well-earned 1-3 away victory over Hume City on Saturday evening, building on their impressive 4-0 result last round.

The league leaders went into the break three-nil, thanks to strikes from Patrick Langlois (12′), Marcus Schroen (20′) and Alun Webb (33′), with Mitch Cooper (85′) getting a late consolation for Hume.

“Hellas” manager Estaban Quintas was pleased with his side’s result, making the most of their preparation.

“We made some adjustments and they were executed on the field with what we worked on during the week. It has been a positive weekend because this week’s work has paid off,” Mr Quintas told Neos Kosmos.

Port Melbourne Sharks had a successful trip against Dandenong Thunder, defeating them 0-2 to put themselves five points ahead in third. Efforts from Ross Archibald (17′) and Jackson Courtney-Perkins (25′) was enough to secure the win.

Bentleigh Greens dropped vital points in their away draw against St Albans on Friday night, allowing Heidelberg to displace them.

Sydney Olympic suffered a devastating loss against Marconi in their 16th round home clash on Sunday afternoon, slipping to fifth on 28 points but still only three away from the top.

An own goal from Ben Van Meurs (53′) and a strike from former Blues striker Charles Lokolingoy (72′) was cancelled out by two penalties from Olympic’s Roy O’Donovan (78′, 84′) before Christopher Hatfield scored a late winner (90+2′).

Adelaide Olympic had to settle for a goalless away draw against West Torrens in the 15th round on Saturday afternoon, keeping them in 11th with 12 points.

Olympic FC was thrashed 5-1 away by Gold Coast United in their 14th round fixture on Saturday evening, keeping them in second on 26 points.

A last-minute winner helped Floreat Athena ascend to second (26 points) with a 2-3 away victory over Balcatta in their 13th round encounter on Saturday afternoon.

Canberra Olympic fought their way to a 2-2 tenth-round away draw against bottom-placed West Canberra Wanderers on Saturday afternoon, leaving themselves in fifth on 11 points.

Olympia Warriors was annihilated 10-1 away by the league leaders, Devonport, in their round ten clash on Saturday afternoon, forcing them to remain in seventh place on a measly three points.