The constant rise of temperatures is worrying government officials 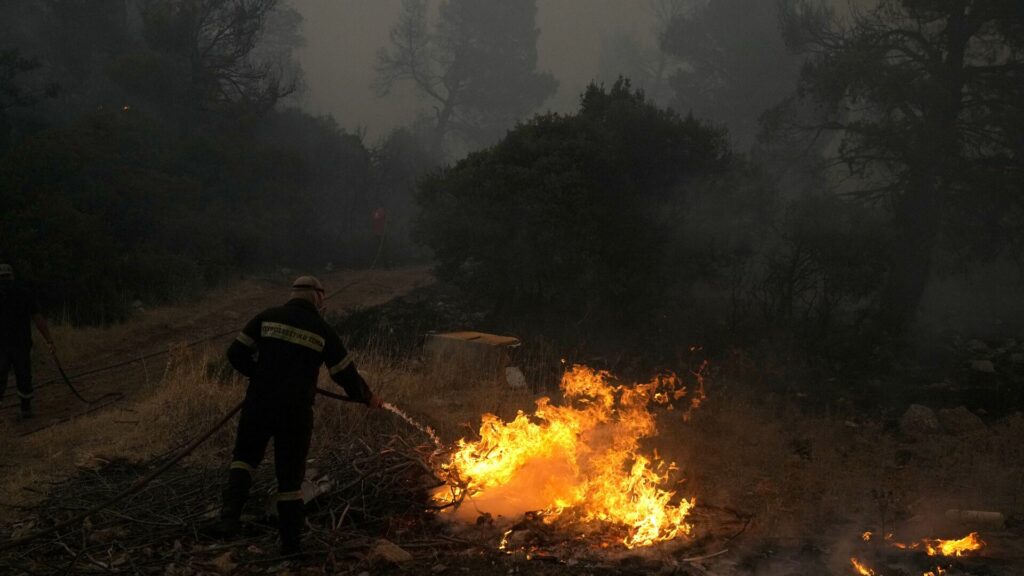 A firefighter extinguish a fire during a wildfire in Greece, in 2021. Photo: AAP via AP/Thanassis Stavrakis

A wildfire broke out on Monday morning in grassland at a mountainous area on the island of Naxos, in the South Aegean.

According to authorities the blaze was far from the village of Apeiranthos, the closest residential area.

Fourteen firefighters with six vehicles and two aircraft were called to the scene and managed by noon (local time) to largely contain the fire, Kathimerini reported.

Meanwhile, another fire broke out on Monday, this time in a dough manufacturing plant in Magoula, west Attica.

Τhe Fire Department said it had managed to limit the flames to one section of the factory, without providing further details as to the possible cause.

A total of 24 firefighters were at the scene.

The blaze that broke out in the area of Gaia in Evia in the municipality of Kimi-Aliveri on Saturday has finally been brought under control even though the village of Kremastos has been evacuated due to high winds in the area.

The massive environmental destruction due to the 2021 bushfires in northern Evia have vastly contributed to the risk of more fires in 2022 due to the vegetation being significantly low and dry as Greece enters summer.

Temperatures in Greece are much higher than expected for the season, something that has contributed to the significant increase of wildfires.

Close to 200 fires have broken out since the start of June around the country, a much higher number than anticipated, and an issue that is worrying the government and first response services and organisations.