Helen Zahos was in Ukraine to coordinate the logistics of setting up a field hospital near the frontline. 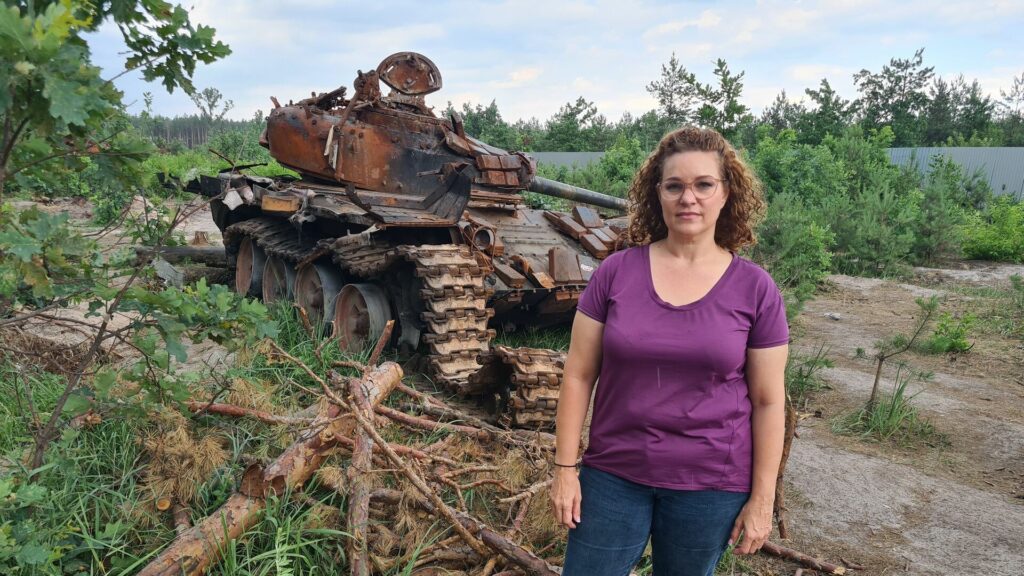 I wrote this in Bucharest’s Henri Coanda International Airport while waiting for a connecting flight back home, to Australia. I found it hard to believe that I was in a safe place again.

I spent the four weeks in Ukraine near the frontline. It is the biggest war in Europe since World War II. My chorus was sirens heralding missile strikes, and I saw the devastating consequences.

The area I was in, (I cannot disclose it for the safety of colleagues), is close to the conflict. It is being bombed may times a day.

It was pitch black when I first heard the Russian bombs, they sounded like a thunderstorm. The largest explosion was after a gas station was targeted.

Blackout and curfews were imposed every night, I have never experienced that before. It was eerie.

Lights go out at 11pm, windows were covered and blackened, and the glass was taped, curtains drawn with strict instructions to not leave the building, and to not stand near windows.

Everybody complied, they understand the severity of the situation. Their lives depend on that understanding.

What am I doing in a war zone?

I asked that of myself when I first got to the border and saw backlogged cars and trucks trying to leave, and people fleeing on foot.

My colleague and I were the only ones crossing the border in the opposite direction. We were entering a war zone.

As a volunteer nurse and paramedic, I was asked by the organisation that I had been to Iraq with previously, to go into Ukraine and assess, then coordinate the logistics of setting up a field hospital near the frontline.

Many meetings were held, with the Minister of Defence, the commander of the army hospital, the local mayor, the health department, disaster coordinators and medical directors of local hospitals, and army commanders from the frontline.

They are concerned that the frontline would move, that the hospital would be bombed, and the province would need to be prepared. I visited every hospital in the area, there is so much need.

The army hospital corridors were lined with soldiers missing limbs. Many with severe burns. The children’s hospital was far worse.

The need is for supplies and infrastructure, not for volunteer medical teams. Many medically qualified Ukrainians from hospitals that have been bombed stayed behind.

Many people have stayed behind to help fight, including women. Ukrainian women do everything to support their men, their husbands, and sons, now soldiers.

People have set up refuge centres to care for the families escaping from Mariupol who have been trapped in bomb shelters for two months.

I volunteered in one of the centres for several days while I waited for containers to cross the border.

I saw children with an absent look in their eyes. Children were too scared to look out the window because the light hurts their eyes.

They used black and purple pencils only, to draw, no colours like they once did. They drew houses with blacked out windows, people with sad faces, tanks, and soldiers in uniform with guns.

Men – husbands, brothers, and fathers – who fought to protect their family but had to retreat now sat in the refuge, slumped, powerless and stripped of dignity. They sat as a group in a room down the hall and prayed.

The hospital director reported an outbreak of hepatitis and cholera because of a lack of clean drinking water in Mariupol and Donbass.

There was equipment in the hospitals but no consumables, people are dying from their injuries because they don’t make it to hospitals in time.

The biggest need is to set up stabilisation points with the equipment that we wait on.

I felt like I walked into a famine with a piece of dry bread.

The frontline commander from Donbass came to meet me. I spent much time in bomb shelters assessing what needs to be set up.

I met with the mayor and deputy mayor in Moldova on my way home to assess the hospital disaster plan and the shelters and warned them of disease outbreak in Ukraine, as they prepared to receive refugees.

It is unclear what the future holds.

Will they attack by air? Will they storm the ground like they did in Irpin and Bucha?

Those civilian houses were destroyed, bombed, and then turned to rubble and ash by Russian soldiers. They even destroyed churches.

Nothing is sacred. I saw the devastation firsthand. War crimes. Civilians scrambled for safety as their houses burned and tanks rolled in. The evidence is there.

Moldova is not safe, 50 percent of the population is pro-Russian, and the other 50 percent believe Romania and NATO will come to the rescue in the case of an invasion.

I am not here for the politics, I am a nurse committed to humanity. If a human is injured or needs help, I help them.

It don’t pick a side in a war zone. All I know is that innocents are pawns of a bloody game.

Preparations are now being made now for winter, and it will be a bitter one. The fighting intensifies as Belarus expands the front line; the Ukraine defence weakens.

Ukraine is not giving up, and there is no end to in sight.

Helen Zahos is an MACN, FRSA, registered nurse, paramedic, and consultant based in Queensland, who works in conflict and disaster zones; she is a Tedx Speaker and has presented in numerous national and international forums.