The Cretan tailor has left his mark in the history of Chapel Street, where he worked passionately for 56 years 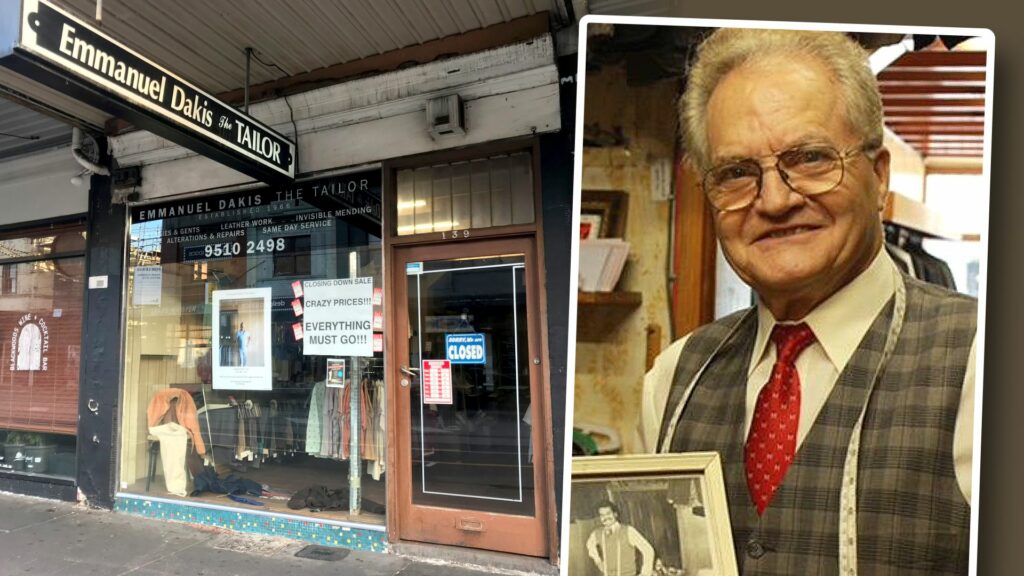 “I don’t want to exist. I want to live!” Emmanuel Dakis, the tailor of Chapel street, once said in an interview to Aron Lewin.

This phrase sums up how the Cretan tailor of Chapel Street in Melbourne, lived his life to the fullest, until he took his last breath early last month, leaving behind him treasured memories for all those who loved him.

Recently named “The legend of Chapel Street”, ‘Emmanuel Dakis, The Tailor’, is a huge part of the precinct’s history, spanning 56 years since it first opened its doors in 1966.

The workshop has that old vintage feel with the same machines, the hard-worked bench, and tools the Cretan tailor used throughout his life, and the place is drenched with his presence. The threads, fabrics and high quality suits and shirts he made, dating back to the 1960s and 70s.

His widow Eleftheria and their daughters Mary and Sophia are still in the grips of grief, but they want to talk about him, and celebrate in any way they can, the life he led and the special person he was to so many.

His customers loved the shop for that vintage atmosphere and didn’t want to see him modernise it, Mary Dakis, his daughter explains to Neos Kosmos.

“Here on this bench, our daughters would take naps when they were little, while we worked,” says his widow, Eleftheria, who has sewed alongside him since she was 17.

He worked hard, and never took a day off sick until he fell ill for the first time at the very end. Though for Dakis it was never work. He would tell his daughters that he had not worked a single day in his life, “because if you do what you love, it is not work”.

The neighbourhood in Windsor changed over the years. At first, when they opened up the business on Chapel Street, there were mostly Greeks living in the area.

“In those early days he would sew 25-30 wedding suits a week! At the time there were many Greeks who came here, eager to get married,” Eleftheria says.

His reputation grew and his eye for detail and perfection was respected amongst other tailors too, who would send him their customers when a job was too complicated to handle.

Master of his craft, he received in 2013, the gold award in Australia for excellence in quality service.

Born in 1940, in the Cretan coastal village of Makri Gialos, Emmanuel Dakis loved the sea as much as his craft. If he wasn’t wearing a suit, vest and a tie, he was in shorts or bathers. Mary adds that for the past 37 years her parents would travel every year back to his village in Crete, enjoying what each country had to offer to them.

Even in Melbourne, their home was by the sea and he would take a swim regularly. His two daughters he plunged in the water when they were only 40 days old, to make sure, as he said, that they would also love the sea.

From the age of two, in Crete, his toys were old sewing machines in the workshop his father and grandfather had in the village, and it was not long before he was also making trousers, after school.

Emmanuel Dakis shortened his name from Halkiadakis, when he came to Australia, carrying a small suitcase where he packed his most precious belonging. His sewing machine.

“I had my craft and I had my sewing machine, so I knew that I could always work,” he would tell his daughters.

He followed his sweetheart, Eleftheria Adamis, to Australia. She had left a year earlier to live with her cousins, while he completed his military service in Greece.

Even their love story, shines a light on the character and commitment, characteristic of the Greek couple that made Australia their home.

As fate would have it, Eleftheria lived a few doors down from the workshop he opened in Athens, on Kolokotrini street, in the suburb of Aghioi Anargyroi. Having some experience with sewing, she was introduced to him and worked as his apprentice from the age of 17 years.

When she told him that she was planning to migrate to Australia he asked without a moment’s hesitation if he could come too.

During the year they were separated, they wrote each other a letter every single day.

Though Dakis wasn’t a big fan of celebrating anniversaries and birthdays, saying often that it’s all just business, he gave happiness every day. To him, what mattered was how you treat someone on a daily basis.

“I was lucky, because I got to work beside him, for 23 years,” his daughter Mary explains. “I got to know him very well and we were friends. When we were young girls, he made sure we learned how to do the basics. He didn’t have sons, but he made sure he taught us what he would his sons, so we would be independent and know how to fix things around the house. He would always tell us, ‘There is no substitute to hard work. There are no shortcuts’.”

That is how he lived too. From the moment he opened the shop he was successful.

Within six months in Australia they had bought their own home. He took his wife and newborn daughter Sophia, straight to their new home from the hospital when she was born.

“My father worked the cloth as if he were playing music,” Mary says. “In the end, when his sight was failing, he worked with his mind and his hands.”

There is still so much of his presence in the workshop, and his wife and daughters are emotional as they decide to draw the curtains on this huge part of their lives.

“I promised my father two things. That I would look after him in his old age and that I would keep the shop open for as long as he wanted to work. We used to say jokingly that we would carry him out of here.

“This shop is my father’s shop, not mine. There are a lot of memories in here, and every day is hard.”

They say that they thought hard about what to do next, questioning what would their father want to do with all the clothes he still has upstairs from the 60s and 70s.

“We decided that he would want people to wear them. And that is why we have a huge sale on, giving everything away for little. It is not about the money. We want people, his customers, to wear the clothes he made, to wear his label. His customers, are people that have known him for forty years and they are so sad, as if they have lost a close friend. It is touching to see how much he was loved.”

Mary adds that they will then put up the shop for rent, and place a plaque with his name outside the shop, in his memory.

“The years pass, youth fades and you lose your loved one. But we have our memories. No one can take that away from us.”

The sale will be on until everything is gone.