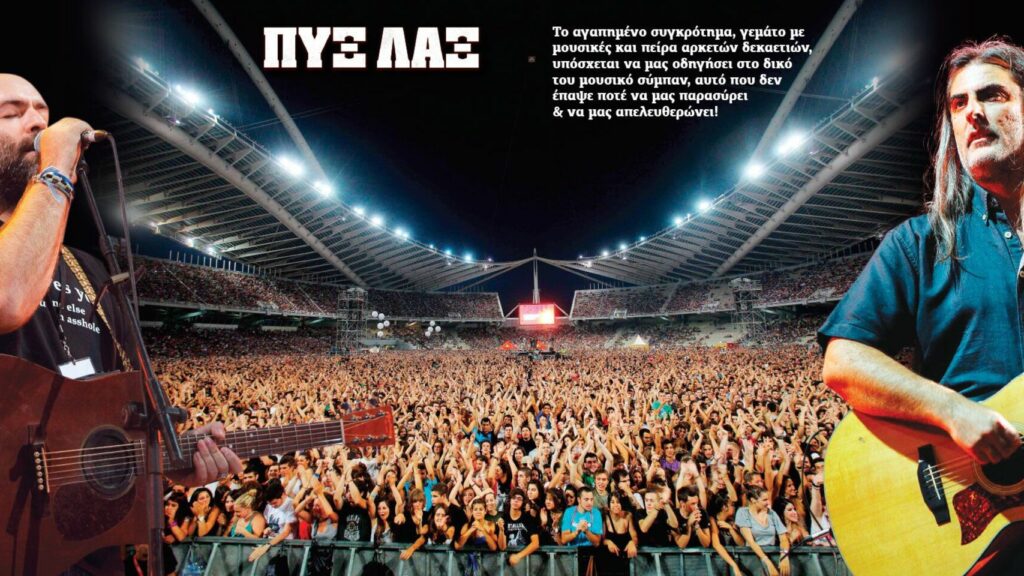 Pyx Lax, the most important Greek folk rock band of the 1990s, formed in 1989. Their first release for EMI in 1990, Τι Άλλο Να Πείς Πιο Απλά, or What else can you say more simply? rocked the charts and drew critical kudos.

Pyx Lax dominated the Greek rock scene until  2004 when they broke up. They reunited in 2011 for a tour in honour band member, Manos Xydous who died the year before and in 2018 they reunited permanently.

They had three gold and five platinum albums their blend of rock, and Greek folk music, provided a fresh perspective.

Their observations of Greece in the 1990s captured the feelings of their audience from the restless 90s kids of Greece to the neighborhood barista.

Over the years, and after many tours, a close and loyal relationship has developed with Pyx Lax audiences.

In 1996, selected pieces from the book by Maros Vamvounakis Old Loves Go to Heaven, were the lyrics for the self-titled song of Pyx Lax, from the album The bogeyman sings alone at night.

In 1998 they toured Britain and did four sold-out shows.

They released Happy in the City of Crazy, in 2003, an album they shared with artists such as Psarantonis, Melina Tanagri, Gordon Gane, Steve Wynn and Marc Almond.

For tickets go to: https://www.giantentertainment.com.au/pyxlax