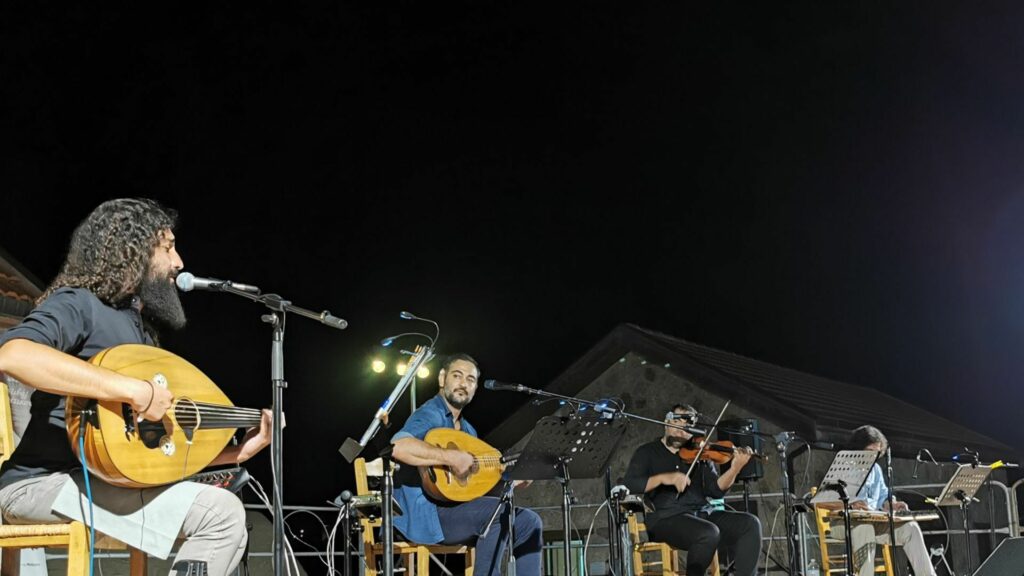 From the 2021 'Syra of Markos Vamvakaris' festival. Photo: Facebook

Rebetiko Festival Syra of Markos Vamvakaris welcomes those who love the “rebetiko” music genre from Greece and abroad, to its sixth edition that is going to be held from August 29 to September 2 in different locations on the island of Syros.

The consequences of the Asia Minor catastrophe had a decisive impact not only on major national issues, but also on the evolution of urban folk music, which was influenced, reinforced and enriched with artists and with musical forms that came from the coast of Asia Minor, as the only baggage of the uprooted, in most cases. Among these people that were considered to be foreigners both in Turkey and in Greece, stood out intellectuals, businessmen, but also insurmountable musical geniuses that are mentioned with awe and respect until today and as such will be mentioned in perpetuity.

Gradually, most of the representatives of the Asia Minor School were adapted and integrated into a new movement created by the so-called “Piraeus” School, having Markos Vamvakaris from Syros as rector, whose playing, forms and style were the cornerstone of this great music genre, our folk music.

In this year’s program, spanning five days, the participating artists Maria Katinari and Giorgos Zorbas and the local group Ilianthos will focus on the era of the first decades of the 20th century when the Asia Minor style dominated. This axis includes, among other things, a concert by the zithers of “Anagnostirion” Agiassou Lesvou, one of the oldest cultural institutions in Greece with a rich work and an important archive. In addition, the music workshop with Petros Kouloumis as lecturer and on the subject of the technique and the stylistic approach of the Asia Minor School is included here.

Rebeti from Athens, as well as the local bands Estoudiadina of Cyclades, Sabah, Who and En Chordais and Organois will have references -but not exclusively- to the work of the great folk bard Markos Vamvakaris, presenting influences, interactions with other genres and collaborations with others composers.

During the Festival there will be an exhibition of folk musical instruments, where some of the most important Greek luthiers will exhibit their creations. All these creators have preserved on one hand the know-how and tradition of hand-made construction to this day, and on the other hand they have introduced innovations in the use of materials, in the development techniques and tools: Galanos Nikos, Gulielmos Adonis, Dellios Andreas, Kadoglou Giannis, Katsifis Tassos, Miltiadou Savvas, Paisios Nikos, Polytaridis Giorgos, Stamkos Panagiotis, Stefanidis Grigoris, Schinas Dimitris, Tsiolis Makis, Tsoulogiannis Giannis, Fronimopoulos Nikos.

‘Syra of Markos Vamvakaris’ has been indexed in the European Festivals directory festivalFinder.eu and has received the EFFE LABEL.

The Festival is held under the auspices of the Ministry of Culture and Sports, the General Secretariat of the Aegean and Island Policy; co-organised by the Municipality of Syros-Ermoupolis and the Cycladic Development Company (KETAN), the non-profit organisation of the Chamber of Cyclades.

This is a free entrance event. Online booking via eventbrite is required. For specific events and locations click here.