Diatribe: The bishop and the papoutsakia

Seriously? Can you stop that!” my mother exclaims indignantly, waving away my hand. My mouth is stuffed too full of raw eggplant to respond. “Still eating raw eggplant at the age of 45?” she continues. “Stop it. I need it for the melitzanosalata!” 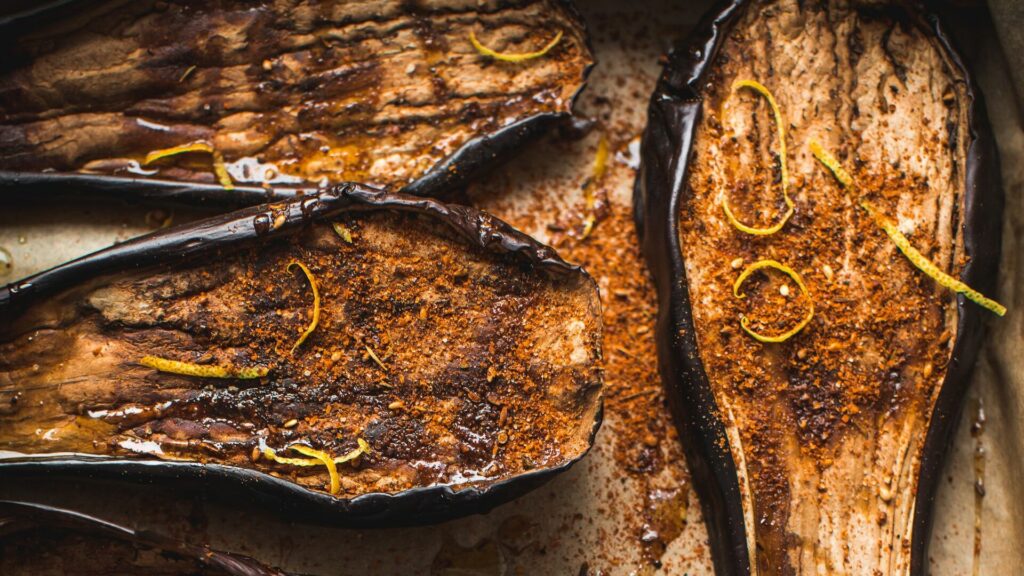 Hollowed-out aubergines in the process of being turned into papoutsakia. Photo: Unsplash/Melanie Boers

We are sitting around the kitchen table, preparing dinner. As this is a family dinner, my mother is preparing the family dinner staple, papoutsakia, eggplant stuffed with mince, topped with a béchamel sauce. My job, as it has been since my childhood, is to incise and score the halved eggplants with a knife and then hollow out their insides with a spoon, until they resemble a dugout canoe. As the cubes of eggplant fall into the bowl below, I scoop them up in my hands and stuff them greedily in my mouth, revelling in their spongy texture and peppery taste on my tongue. I also have a similar inability to restrain myself around raw garlic, onion and ginger, which is why I am considered a serial pest around the kitchen.

My mother has already prepared the mince and is now stirring the béchamel. “You know, Pandeli in Thessaloniki makes papoutsakia with slices of tomato rather than béchamel,” I remark. “Much tastier and infinitely more light.”

“That may be so,” my mother dismisses me. “But besamel (she always uses the Greek pronunciation) is traditional.”

“In what way?” I ask. “Did you have béchamel sauce in the village? Actually, it’s not even French. It was created in Tuscany during the Renaissance, where it was referred to as Salsa Colla (glue sauce) owing to its sticky, thick consistency. It was introduced to France in 1533 by the chefs of Catherina de Medici. Who knows when it arrived in our neck of the woods. Some ancestor of Nigella, perhaps.”

The béchamel sauce is ready and my mother is now coating the eggplants with it. I marvel at the way the purple-black sheen of the eggplant is juxtaposed against the white of the sauce. Then they come out of the oven, the sauce will be a golden colour against the black and I marvel at how the good people at AEK have not had the imagination to popularise papoutsakia as a team staple, it bearing the colours proudly. I mention this to my mother, adding for good measure that for some reason, the cooked eggplants always remind me of my great grandmother’s stories of how people boiled bits of leather shoe to survive the German occupation. I also inform her that the Greek word παπούτσι, is derived ultimately through the Turkish, to the Persian paposh, meaning shoe or slipper. Being brought up with stories of pre-migration privation and recalling my great-grandmother’s limited cuisine, I ask my mother:

“So why are papoutsakia your favourite dish? Did you encounter them here in Australia?”

“No,” my mother responds. “But I didn’t in the village either. We barely had the essentials, as you know. But there was a teacher in our village who was from one of the prominent, well-to-do families of Ioannina who had taken quite a shine to me. She would often invite me to her house, let me borrow her books and teach me cooking. On one occasion, her family were holding a dinner in which all the hoi polloi of Ioannina were invited. The mayor, the head of the prefecture, the member of parliament, the chief of police, doctors, lawyers… all the dignitaries of the time. And, of course, the Metropolitan, Seraphim, who went on to become Archbishop of Greece. My teacher thought it would be a good experience for me to attend, to be exposed to a different type of social setting and conversation.

I arrived early and helped set the table. I marvelled at the smoothness of the tablecloth, and the designs on the silverware, having seen nothing like this at home. Most of all, entering the kitchen in order to lend a hand, I was astounded at the multitude of smells and ingredients, especially the aroma of cinnamon that was intoxicating. In one corner, my teacher’s sister in law was mixing up a mysterious emulsion. “That is mayonnaise,” my teacher informed me. Further down, another lady was straining yogurt. “This is talatori,” my teacher said. “Some people call it tzatziki,” I had said.

When the guests arrived, I was seated at the far end of the table, closest to the door. Desperately I tried to remain inconspicuous, something that for the most part was easy, as the guests were too busy trying to curry favour with each other and were chatting in an animated fashion. Then the food was brought to the table and everyone began to serve themselves. Except for me. I sat motionlessly, transfixed at the vision of the mouth-watering dishes before me. A plate laden with eggplants covered with some inexplicably strange sauce caught my eye. All I wanted to do was to stuff my face in it, but I held back, embarrassed. These were society people with society mores and manners. I did not know how such foods were eaten. Most of all, I did not want to be the subject of ridicule.

Suddenly, I felt an arm on my shoulder. “These are called papoutsakia,” came the deep, sonorous voice of Metropolitan Seraphim. “They are very tasty. You should try them.” He leaned closer. “You know my child, I am from a village, just like you. And I also did not have such foods on my table. One day, when I was at the seminary, I was invited to a table just like this one, and not knowing any of the foods, in my embarrassment, I asked for an egg. There is no shame in not knowing. But there is shame in not trying to learn. See here,” he continued, taking hold of a papoutsaki with the serving spoon and placing it on his plate. He then took hold of another and placed it on my plate. “You cut it like this,” he demonstrated, cutting his eggplant into squares and placing one in his mouth. He giggled as a fleck of besamel dropped onto his beard. “Now try some.” He watched as I copied his movements, dissecting the papoutsaki carefully. “Now put some in your mouth. It’s good. Isn’t it?”

On the other side of the table, the head of the prefecture sniggered. “Lessons in how to eat for village girls …”

“Silence, godless one!” boomed the voice of the Metropolitan. “For I ever have the misfortune to hear your confession, the litany of your sorry sins would never end!” Chastened, the head of the prefecture bowed his head and fell silent. I on the other hand, continued to eat. It was the most gloriously rich dish I had ever eaten. Transported along the aromas and explosions of flavour upon my tongue, and emboldened by the care and attention by the Metropolitan, I don’t recall much else of that dinner. A few days later, my teacher invited me to her house again.

“No books today,” she smiled. “Instead, kitchen work. I’m going to teach you how to make the papoutsakia you enjoyed so much. Now. To make the besamel….”

Fast forward 15 years and a lot had happened in the intervening years. A year after the dinner, I left the village and came to Australia. Newly graduated, newly married, I returned with your father to Greece on our honeymoon. By this stage, Seraphim was Archbishop of Greece. On a whim and having no idea as to the protocol, I went to the metropolis and asked if it were possible to see him, telling him which village I was from. Soon after we were ushered into his presence. “Your Beatitude, I am…”

“You are the girl who ate the papoutsakia!” the archbishop beamed. “I remember! How time flies! How much we have all eaten since then…”

We sat with him for a time before he invited us to lunch. Call it coincidence or divine design, but papoutsakia just happened to be on the menu for the day. As we ate, the archbishop chuckled: “I remember the look on that head of prefecture’s face when I told him to be quiet! Ha! Yes, I remember!”

As a parting gift, the Archbishop gave us a copper dish, engraved with the double headed eagle. Yes, that on that is on the wall in the living room. It’s from him. “May we eat papoutsakia again together some day!” he exclaimed, as we took our leave.

“And that is why papoutsakia are special to me,” mum concludes. “They opened up a whole culinary world of whose existence I had no knowledge. But mostly because I was a young girl, a nobody and yet this influential and powerful man, who conversed with kings and dealt with businessmen and politicians took the time to make me feel included. It was a lesson that I was able to implement when I went on to work with disadvantaged children in state schools. Everyone is important, no one should be demeaned and you ridicule and ignore those around you at your peril.”

I look at her hands, those hands that have prepared papoutsakia at every special family occasion since I can remember. “Now I’m going to tell you something that you don’t know,” I lean over. “You know that I was in Greece when Archbishop Seraphim died, and that I attended his funeral. What you don’t know is that night, when I returned home, for want of anything to do, I cooked papoutsakia for myself and yiayia.”

My mother gasped. “How did they turn out?”

“Badly,” I replied. “Couldn’t quite master the besamel …”