Diatribe: In the mirror’s image

Brotherhood officials may take photographs with dignitaries in Greece to enhance their status and we can rejoice in their need to do so, but in actual fact, this need betrays a complex psychological phenomenon. 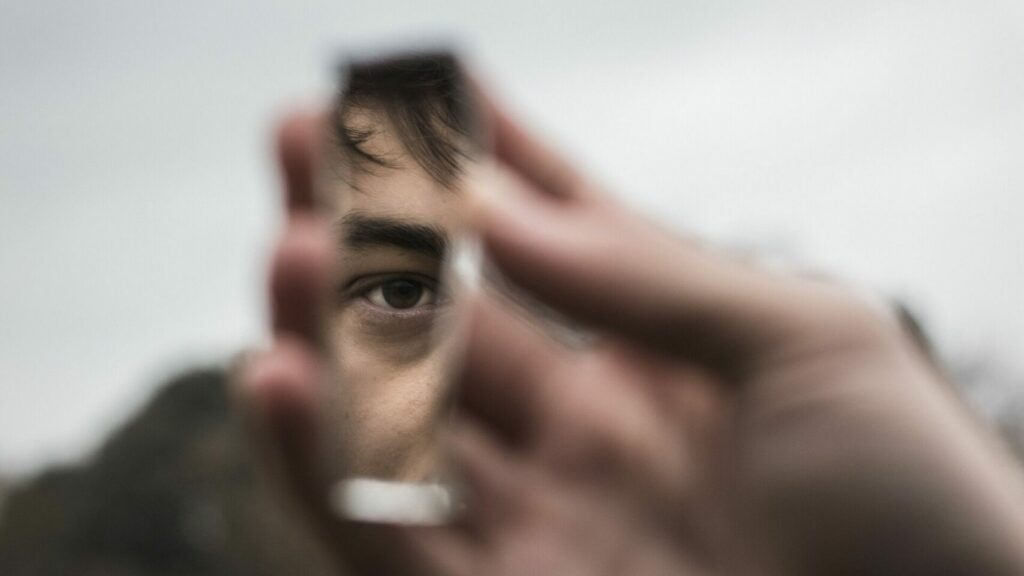 Man looking at his own reflection on a piece of broken mirror. Photo: Alex Motoc/Unsplash

It is that time of year when an icy wind blasts itself through Oakleigh, hurtling tumbleweeds down a desolate Eaton Mall. On the other side of Melbourne, a few lonely patrons of Northcote Plaza shiver as they slouch into Degani’s, and slump into their seats, desperate to escape the cold. Across the city, all is bleak and barren, for in a mirror image of the migratory swallows of the motherland, our people have flown north for the winter en masse, there to resume peregrinations cut short by the ravages of the pandemic.

While most of our tribe will apply themselves to making their neglected properties habitable, pestering their villagers with stories of how we do things better in Australia or photographing their souvlaki, which they consume while dressed in the latest summer fashions as purveyed in the souvenir shops of Mykonos, there exists another sub-group whose aims are higher and infinitely more lofty than mere gratification.

These are the Greek-Australians, generally office holders in sundry suburban brotherhoods or associations (not to be confused with the representatives of some of our major organisations such as the GOCMV, who actually represent us on important issues and achieve significant results such as agreements to avoid double-taxation and the grant of tourist working visas to Greek-Australians) who travel to the motherland with the sole purpose of disturbing the public servants of the Hellenic Republic, its politicians, municipal officers, policemen, soldiers and other people they, in their abslute discretion consider to may be important, during their summer leave. In so doing, a form of ritual observance has evolved, whereby, after the meeting, it is considered of paramount importance to take a photograph with them in order their peers back in Australia may think that they are important, enacting in this way a unique Greek-Australian rite of passage.

A long time ago, so long ago in fact that Facebook had not been invented yet, (and this is important, for if the photograph referred to in the preceding paragraph is not posted in Facebook, there is plausible deniability as to whether the high level encounter actually took place), I was treated to one such dignitary call. Visiting the motherland in the height of summer for a conference, I ran into one one the delegates , a rather senior gentleman, who happened to be a compatriot from our common place of exile. “Come and meet the local Member of Parliament,” he gushed. “I’m about to pay him a visit. You come too!”

I lowered my frappe slowly, for I was trying to blend in with the locals, and asked: “Why? What is he to me? For that matter, why on earth would you want to waste your time, when you can sit here and drink frappe with me and ruminate over finding your own internal equilibrium?” The look of shock and bewilderment on my interlocutors face has henceforth been indelibly etched upon my memory. “Are you serious?” Drawing himself up to his full height of five feet, three inches, he pointed his finger at me and waved it didactically. “First of all, you NEVER pass up on an opportunity to meet a politician. You never know what it can lead to. Secondly, the photo opportunity is priceless. It is the ticket that ensures that you will be voted in at the next brotherhood election.”

I sought further clarification. “How does that work?” to which my interlocutor snorted derisively. “Do I have to explain the obvious to you? If the local MP has condescended to meet with you and take a photo with you, then obviously, it means, to all the voters back home who come from the same district, that he endorses you. It means that you have connections, that you are a person of influence.” Puffing out his chest and placing a hand on the lapel of his jacket, he asked rhetorically: “Who would you vote for? Someone with access to the echelons of power, or a nobody?”

“Someone who knows how to run the club,” I murmured. “You are an idiot,” my senior advisor snapped. “Watch and learn.”

When we were ushered in to the local MP’s office, I marvelled at how pristine his bookshelf was, laden with leather bound tomes that glistened in the artificial light, exuded an aura of never-readness. The parliamentarian was jovial, grasping our hands warmly while taking furtive periodic glances at the tanned, excessively long legs of my interlocutor’s daughter. We sat down and the local member of parliament enlightened to us as to how indispensable he was to the region, how much money would be available from Europe, how many development programmes were to be initiated, and what a corrupt and thoroughly incompetent parliamentarian his predecessor was.

To each of his points, my interlocutor, smiled ecstatically, enmeshed as he was, in the luminous aura of celebrity. Muttering a few promises to encourage his members to vote for him at the next election, he stood up when the member of parliament rose to terminate the discussion after ten minutes and was about to sail beatifically out of the room when he remembered. “Oh, we need to take a photograph. Just me and the MP of you please.”

His daughter yawned and gazed out the window, as my interlocutor looked at me pointedly. I took a number of shots but when I showed them to him, they did not pass muster. “I look too small here. Don’t you know how to take photographs?” Eventually, the MP’s watch consulting became so frequent that even my interlocutor took a hint and took his leave.

“Now, tomorrow we will meet with the nomarch, the head of the prefecture.” I began to make my excuses, citing a prior engagement, but he would have none of it. “Don’t be anti-social,” he commanded. “Furthermore, my daughter is going to the beach so I need someone to take a photo.” The nomarch was an immensely portly and jolly individual who showed good-natured if somewhat detached interest in my interlocutor’s detailed description of the barbeques and dinner dances his brotherhood organised, even if he would constantly check his diary, pick up his phone to text someone or interrupt to ask: “Would you like some books?” or “I’ll tell you what, I’ll organise for them here to send you some dancing costumes.” I took the obligatory photograph but as we left the nomarch’s office, my interlocutor began to panic. “We are seeing the mayor this afternoon. Should we send these photographs to Neos Kosmos now or shall we wait? Do you know how to get them off my phone? And of course a press release. I need you to write me a press release. Something about how the meeting was at the nomarch’s request to discuss the affairs of the Greeks of Melbourne and strategically plan for the future…”

“What plan? You talked about the road that was supposed to but isn’t being constructed to your village?”

“Well there is one now. Hurry up. I need you at the mayor’s office in the afternoon.”

I didn’t make it to the mayor’s office on time. Interposed between the meeting with the nomarch and the meeting with the mayor, my interlocutor was supposed to participate in a parade to commemorate the liberation of that part of Greece, holding a revolutionary flag from that time. The trouble was, that the president of the Australian Federation of all the brotherhoods of that region was also holidaying and claimed the right of seniority. Harsh words and many jostlings ensued, causing the mayor to intervene to suggest that one leader hold one end of the flag, and the other do the same. As they marched down the town’s main drag, I took generous photographs of the resulting tug of war, which by the way, my interlocutor won, as he ended up taking the flag home with him, using it as a prop for his re-election campaign, after which time, it mysteriously went missing.

Upon his return to Australia, he found the dance costumes waiting for him, which was a cause of some embarrassment as the brotherhood did not have a dance group. One was formed, with the sole purpose of taking a photograph to send to the nomarch as proof of the thoughtfulness of his present and was dissolved soon after, the costumes still slumbering in their packaging, decades later.

When we did see the mayor, he was emotional. “All you guys need to return here. This is your home. We need you. Especially, young, bright, skilled people with ideas like you,” the mayor exclaimed wrapping his arm around my waist rather tightly and pulling me towards him. My interlocutor shot be a venomous look and spat. “You don’t need him. He wasn’t even born here.” The mayor smiled and began to pat my thigh. “There is room for everyone, you know.” My interlocutor did not speak to me for days.

Brotherhood officials may take photographs with dignitaries in Greece to enhance their status and we can rejoice in their need to do so, but in actual fact, this need betrays a complex psychological phenomenon. By seeking out people of influence in the motherland to photograph themselves with, they are in actual fact seeking to show something else: that they have the means to navigate modern day Greece. That they are possessed of the networks that are so necessary for making a viable living in Greece. And if they cannot convince themselves that they never left, then surely that at a drop of a hat, they could go back and fit seamlessly into the zeitgeist of the society which passed them by. Viewed from this perspective, we can only view them with immense affection and sympathy.

When I returned to the hotel, I was met with a surprise. Former Greek Prime Minister Konstantinos Mitsotakis, father of the current incumbent, was sitting alone in the foyer and we struck up a memorable conversation, at the conclusion of which I sought to be photographed with him.

“Why the hell would you want to be photographed with him?” my KKE-voting grandmother in Athens wailed in exasperation when she found out. I recall that it was only after I managed to secure a photograph with Effie Thodi on a subsequent trip, that my grandmother finally acknowledged that I am to some degree, a man of influence. From that time onwards, I have concerned myself only with the pursuit of being photographed with Greek dignitaries visiting Melbourne. One day, I will convince my Greek relatives, that I am important.