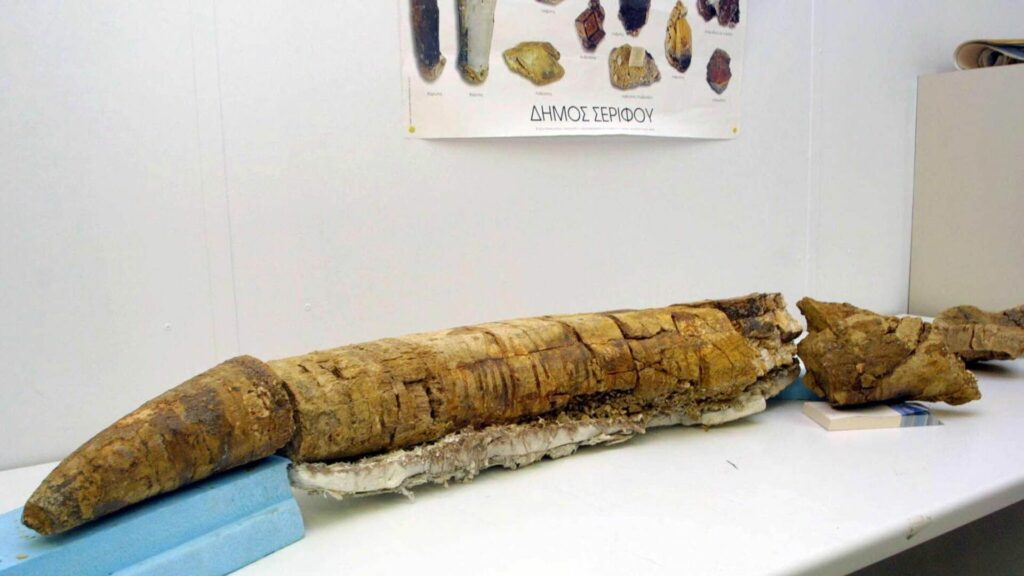 The Natural History Museum of Crete, in 2002, presented the discovery of a major fossil find in bay of Sitia, consisting of a tusk, teeth and other fossilised bones belonging to an ancestor of present-day elephants that lived on the island seven to nine million years ago. Photo: Stefanos Rapanis/AAP

In 1838, when the German King Otto ruled Greece, a Bavarian soldier discovered a weathered skull in a ravine near Pikermi, now a suburb of Athens. The skull looked human, but the soldier was dazzled by the “diamonds” sparkling in the crevices. Back in Bavaria, the soldier could not resist boasting in taverns about his Greek treasure. News of his good fortune reached the authorities, who confiscated the pilfered skull.

The German paleontologist Andreas Wagner examined the “diamond-encrusted” bones. The gems were calcite crystals, which form on mineralized fossils. But to Wagner’s amazement, the skull belonged not to a man but to an ape from the Miocene epoch, about 8 million years ago. Until then, scientists had assumed that humans and apes had appeared at the same time in a more recent geological age. The Pikermi Ape (Mesopithecus pentelicus) proved the error of this assumption and set off the search for a transitional link between monkeys and homo sapiens.

From the mass grave of animals that had roamed Greece millions of years ago came the remains of apes, ostriches, saber-toothed tigers, ancestral elephants, giant giraffes, and rhinoceroses, and relatives of zebras, horses, and antelope. By the mid-nineteenth century, paleontologists began to piece together a picture of prehistoric Greece, a landscape of forest and swamplands slowly transformed by climate change into grasslands like the savannas of Africa today.

Some bizarre creatures at Pikermi bore no resemblance to living animals. For example, Ancylotherium – “beast with hooked claws” in Greek – was a large, grotesque herbivore that confounded the scientists. The beast had huge, wickedly curved claws, defying the dictum that all grass-eaters have hooves.

Dinotherium, the second largest mammal that ever existed, stood 15 feet tall. Its tremendous tusks arched down and back rather than up like those of other elephants. Paleontologists were at a loss to classify this strange beast –– it was assigned to the hippopotamus, walrus, and giant sloth families until it was at last recognized as a swamp elephant, adept at using its backward tusks as a kind of hoe. Dinotheres were the first victims in the Pikermi fossil beds. As their favorite marshes dwindled to a few oases in the dry grasslands, they became extinct due to overspecialization, giving way to typical Pikermi fauna, similar to animals of Africa.

Pikermi’s rich deposits of prehistoric mammal fossils provided nineteenth-century scientists with enough evidence to advance a bold theory. Before the Mediterranean Sea was formed, a vast land mass had connected Asia and Africa and Europe. By the Pliocene, 5 million years ago, rolling plains extended from Greece to India. Greece was the crossroads of great migrations of many animal groups. Antelope and giraffes, originally from Europe and Asia, migrated to Africa by way of Greece. Others, like the elephant, originated in Africa and traveled to India. Another strong connection between Greek and African fauna was established by the Helladotherium – Greek animal -, a common fossil of Pikermi. This strange combination of zebra, antelope, and giraffe perplexed scientists for half a century. Remarkably, in 1901 a “living fossil,” a relative of the Helladotherium—the okapi—was discovered alive in Africa.

Although the Pikermi remains were the first to attract scientific attention, other parts of Greece proved equally fossiliferous. In 1872, for example, excavations on Samos unearthed the remains of the Samotherium, a giant giraffe that grazed the wooded plains that are now the Aegean. Continued digging brought up fossil skeletons of rhinos and mastodons. Meanwhile in Megalopolis in the Peloponnese, the peat deposits produced remains of mastodons, mammoths, and Pleistocene megafauna. Similar fossils are found in Thessaly, Crete, Euboea, Naxos, Karpathos, Rhodes, Chios, and Kos.

At the end of the Pliocene, during the last great animal migrations and thousands of years before the last glaciers retreated from Europe, human beings appeared in Greece. The oldest entire human skeleton found in Greece is from Franchthi Cave, southern Argolid. Evidence of occupation beginning in 20,000 BC shows that the residents of the cave were Paleolithic hunters of wild goats and red deer. These adaptable newcomers began the first steps on the road to classical, Byzantine, and modern Greek civilization. What tales they must have spun about the extraordinary creatures of the remote past, whose fossilized bones still weather out of the soil of Greece.

Adrienne Mayor is a folklorist and historian who looks at ancient “folk science”. She was a Berggruen Fellow at the Center for Advanced Study in the Behavioral Sciences, Stanford, 2018-2019. The feature is from Flying Snakes and Griffin Claws, and Other Classical Myths, Historical Oddities, and Scientific Curiosities (Princeton University Press, 2022).