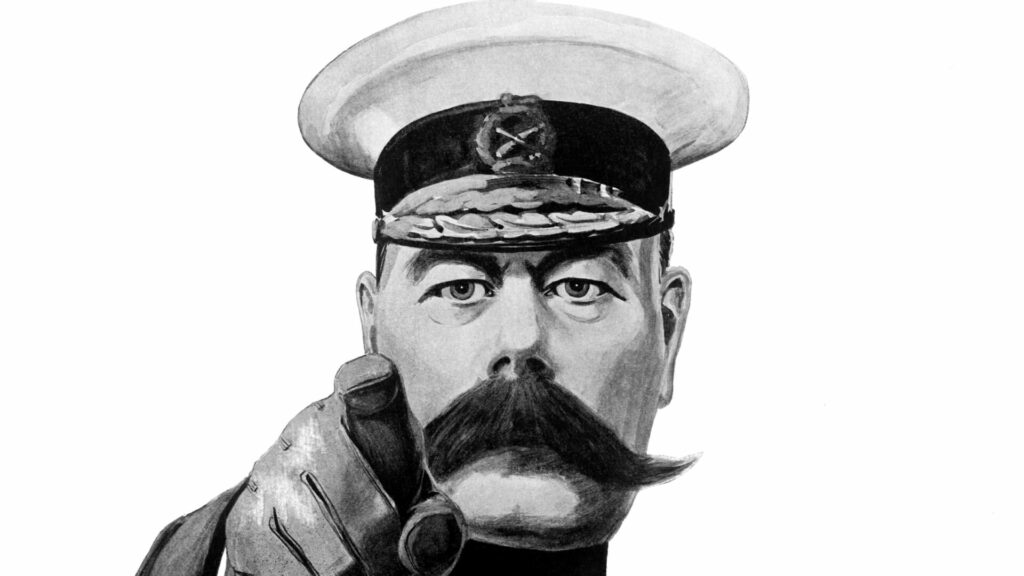 Ignatios was proud of his “Pelloponesian Eyebrow” in the 1990s. Much like the one Lord Kitchener is seen wearing in the famous poster calling on Britons to do their bit in World War One. Photo: AAP/ Stocktrek Images/Cover Images

Ignatios, who goes among the populace under the soubriquet of Nate, is a proud Peloponnesian. His ancestors hail, he tells me, from one of the many villages in which, the claim goes, the Greek Revolution first commenced. The other four villages are fine as villages go, but only his wins the coveted title of authenticity.

Proof of this is the magnificent upper-lip coverings the menfolk of the village traditionally cultivate. Ignatios too is given of late to cultivating a revolutionary Peloponnesian moustache. It is as astoundingly long as that of Lebanese, 1970s sensation Tony Hanna and its precise curvature can be predicted via the use of quadratic equations, which Ignatios is adamant, were invented by ancient Greeks, most likely somewhere on the road to Patra.

I dispute his contention. After all, there is evidence that the Babylonians were performing quadratic equations as early as 2000 BC, and that the Arabs …

“Don’t get me started on the Arabs,” Ignatios interjects. He harbours the conviction that since the ancient Greeks are the source of all mathematics, it is presumptuous of the Arab world to seek to bask in our reflected glory. I cajole him to reconsider, for the Arabs are a most absorbing civilisation, who have fascinated our tribe for centuries. For instance, I inform him, Greek was the second-ever language the Quran was translated into, the first being Persian, by Nicetas Byzantius, a scholar from Constantinople, in his Refutation of the Quran written between 855 and 870. Nicetas’ translation notably employed the spoken Greek of the time rather than the Atticised Greek used for works of scholarship. He renders the Arabic word “Quran” in Greek as «ἀνάγνωσμα» which is the word for reading in the Orthodox liturgy, and translates the word “Sura” (chapter) as «ὠδή» (ode) in the style of an Orthodox hymn.

Ignatios twirls his moustache indignantly. He has recently oiled it with “Morning Wood” moustache oil by the Groomed Man. It is so symmetrical that I am reminded that when the New Scientist magazine debated in 1975 how to quantify beauty, it was suggested that the unit of measure be called the “millihelen” after Helen of Troy. I suggest instead that the unit of measure that quantifies Balkan male beauty should be called the “millistache”.

He dismisses this derisively and I go on to inform him that the Albanian language has 27 words to describe the shape of moustaches, and 30 for eyebrows, thus: gjata, te dredhura, me bishta perpjete, si shuka, mustaqe varur, mustaqe zi, mustaqe madh, mustaqe fryre, etj. Ignatius was proud of his Peloponnesian eyebrow in the 1990s, after Nick Giannopoulos declared it to be all the rage, but has since given thought to their tone and delineation, a task diligently performed by his partner, for he is a man most hirsute.

“Not a hair out of place,” I observe his eyebrows appraisingly.

“Well you know what Greek women are like,” he generalises.

I do know. My mother is one. I muse that well into the 20th century, Western writers had no problems in considering Greek women as part of the western world, usually as classical damsels in distress, in need of rescue. These women would invariably marry their captors and live in the West. Greek men on the other hand, were tacitly kept out of the European family.

Thus, near the end of Dora Bradford’s novel Greek Fire (1935), the English heroine enjoys the following exchange with a young compatriot:

– But, my dear child, you can’t possibly marry a Greek.

Ancient Greeks on the other hand could be quite brutal when it came to stereotypes about women. Take the loveless Hesiod for instance, who offered his ancient contemporaries, this advice: “Don’t let a woman, wriggling her behind, and flattering and coaxing, take you in.” “She wants your barn: woman is just a cheat” and “The greedy wife will roast her man alive without the aid of fire, and though he is quite tough, she will bring him to a raw old age.”

He also taught that if men bathed with women, they would start menstruating.

The poet Semonides was more blunt, even than Hesiod, stating: “Women are the greatest evil Zeus has created.”

Ignatios’ partner is none of these things. Even while in the notes to the second canto of Childe Harold’s Piligrimage, Lord Byron wrote of the modern Greeks that: “they suffer all the moral and physical ills that afflict humanity… They are so unused to kindness that when they occasionally meet it they look upon it with suspicion, as a dog often beaten snaps at your fingers if you attempt to caress him,” she is wise, benign, omniscient and indulgent of his eyebrow insecurities.

According to Ignatios, she holds the purse strings in family and I take great delight in informing him that the word “purse” is derived through Latin, from the Greek βύρσα meaning oxhide. It is proper and right that she does so. Were it up to him, Ignatios would spend his fortune on hair-care products. After all, as his partner freely admits, Ignatios super power is that he never thinks things through.

A fly buzzes past and we marvel at the portents a fly seen in Winter may signify. Ignatios swats it away indifferently and I marvel that the best insect repellent in ancient Greece was divine. The Elians prayed to Zeus Apomyios, also known as Zeus the Fly Shooer. Outside the window of Ignatios’ bayside apartment, grey waves are crashing along the shore as the light fades. There were two Greek goddesses said to control the waves. Benthesikyme, known as the “Wave of the Deep”, was the daughter of Poseidon and Amphitrite and ended up in Ethiopia. The other was Kymopoleia, known literally as “wave-walker,” the goddess of violent storms. We only know of her through a singular mention in Hesiod’s Theogony, though she also had a killer (literally line) in the Percy Jackson epic: The Blood of Olympus, where she tells the hero: “I’m sorry I won’t be able to see you die.”

A light is switched on and all of a sudden all I can see on the glass is the reflection of a painting of Leonidas of Sparta hanging on the wall opposite.

“How much more effective would have the Greek campaign been, if Leonidas had performed a strategic retreat?” I ask.

Ignatios spits derisively. “That’s tantamount to heresy. That’s even worse than the time you claimed Kolokotronis was an Epirot. Seriously, when was the last time you ever said anything useful, you silly bugger?”

Instantly, I recall a delightful exchange recorded by Theocritus in the Idylls between a goatherd, Lacon and a shepherd, Comatas:

Lacon: Remind me, when did I learn any useful lesson from you?

Comatas: When I buggered you, I taught you to moan and groan like a nanny goat bleating when the billy goat shoves it in.

Lacon: May you be buried no deeper than you bugger, you cripple!

The revelation of my recollection causes Ignatios to raise one perfectly sculpted eyebrow quizzically in my direction.

“So am I Makarios, or Kissinger in this paradigm?” I ask.

“I don’t know,” Ignatios strokes his moustache and gazes dolefully at the sea. “I haven’t thought it through.