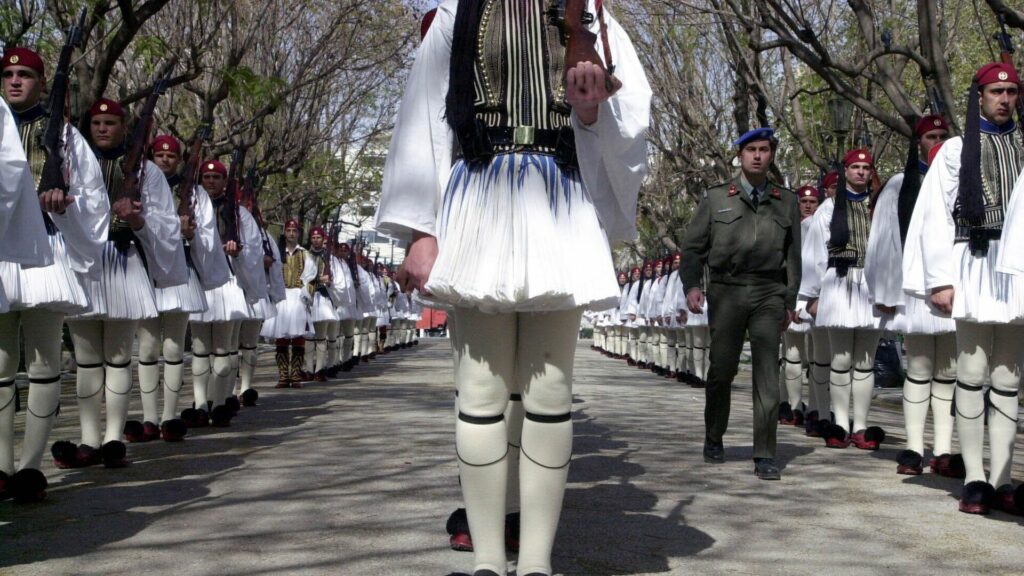 File image shows an army officer reviewing Evzones, members of the Greek Presidential Guard ahead of a parade. A record number of tourists turned up to watch the Grand Change of the Guard on Sunday. Photo: AAP via AP /Thanassis Stavrakis

One prime example of the record tourist season that Greece is enjoying this year was witnessed when more than 1,000 tourists turned up to watch the “Grand Change” of Greek Presidential Guard, Evzones on Syntagma Square in Athens on Sunday (Greece time).

The iconic change of the guard before the Tomb of the Unknown Soldier, usually takes place daily every hour, on the hour, when two guards come in to take their posts replace the two guards who have been there before them. This is referred to as the “little change”.

The “Grand Change” which has become popular with tourists and locals is a much grander affair that takes place every Sunday at 11am and involves the whole Guard with the officers and a military band who all marches from the Guard Barracks to the Tomb and back.

The Greek Presidential Guard was the last unit of Evzones in the Greek Army. The unit was made of elite light infantry and mountain fighting units. It was established by royal decree on 12 December, 1868 and were previously known as the Agema, Palace Guard, Royal Guard and now as the Guard of the President of the Republic.

The Presidential Guard is purely a ceremonial unit that is permanently in charge of guard the Tomb of the Unknown Soldier and the entrance of the Presidential Mansion on Herodes Atticus Street.

Watch a video from local newscaster Proto Thema below: