A Burden on The Earth: Greek Myth and climate change 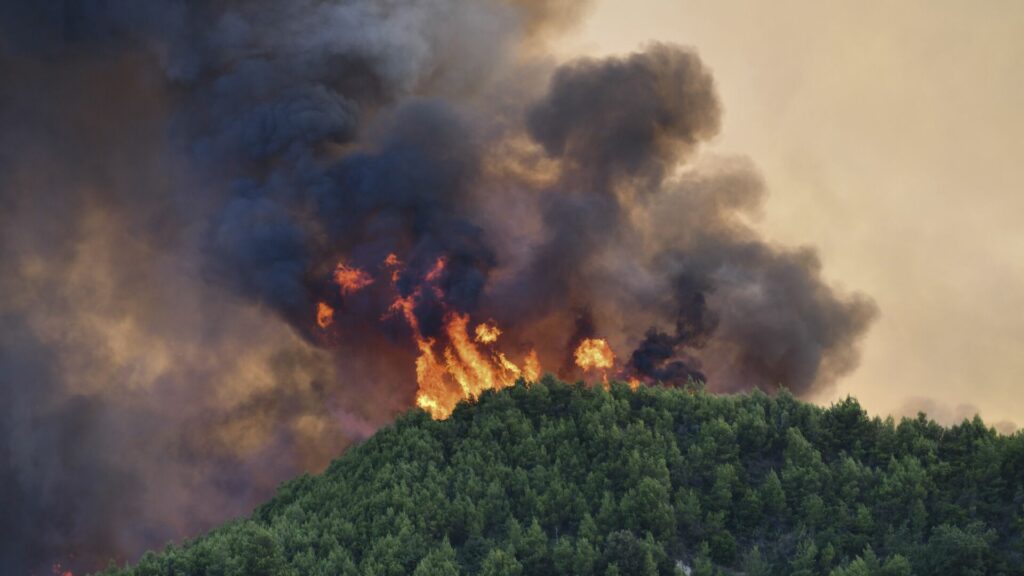 Climate change has had a catastrophic impact on Greece - here a fire burns on a hill with pine trees near the village of Krestena south of Ancient Olympia, about 320 kilometers southwest of Athens - July 24, 2022. Photo: AAP/Giannis Spyrounis

I grew up in Southern Maine in the United States, spending most of my childhood outside in the pine forests during the 1980s and 1990s. As an adult, I now live just a few hours south, outside Boston and I find myself shocked after another season of records. I can’t recall any winter with such little snow; when I was young, one or two summer days in the mid-nineties would be on the nightly news.

This year New England has seen record temperatures (a dozen or more days near 40C) accompanied by a drought people are barely mentioning. Leaves that turn brown and fall in late September are already dry and crumbling; unwatered lawns are dust.

Many fields of the humanities have been writing about our relationship with the environment for over a generation (in a field called ecocriticism). Those of us engaged with the ancient world, however, have been a little slow to relate our work to the extinction level event on the horizon. The lack of engagement may not be surprising to many. What does the ancient world have to say about climate change?

Ancient Near Eastern traditions from the Atrahasis to the Gilgamesh Poems and the Hebrew Bible frame the destruction of the human and natural world because of divine anger or retribution. These stories give human beings some modicum of comfort by providing at least an explanation for human suffering. While there are echoes of these flood stories in Greco-Roman myth (most significantly, perhaps, in the Greek story of Deucalion and Pyrrha as told by the Roman Poet Ovid), destruction does not feature as prominently in early Greek myth.

The major exception to this assertion comes from the Hesiodic Myth of the Ages. In Hesiod’s Works and Days, a poem addressed from the narrator Hesiod to his brother Perses, we find an account of the degradation of the generation of human beings, named after decreasingly valuable kinds of metal: the ‘gold’ generation was close to the gods, the silver generation are like children, the bronze generation was warlike, and we, more-or-less contemporary humans, are a race of iron.

Wedged suspiciously between the races of bronze and iron, we find the race of heroes, according to Hesiod. This is the generation that was the product of unions between mortals and gods, the glorious era of Herakles, Achilles, and Odysseus. This generation died out fighting around Thebes (where the story of Oedipus’ family took place) and Troy. According to a popular epic fragment from a poem called the Cypria, it was Zeus’ plan to relieve the Earth of the burden of these heroes by arranging for their violent deaths in war.

The Theme of Poor Leadership

When I teach myth students about destruction narratives, one of the things I emphasize about ancient Greece is how one of their chief foundational narratives–the Theogony–creates the universe through an intricate system of biological relationships: nearly everything in the world is born from Gaia, the earth.

This includes human beings. The Theban poet Pindar praises Gaia by saying “The race of gods and the race of men are separate; but we both breathe thanks to one mother.” (῝Εν ἀνδρῶν, ἓν θεῶν γένος· ἐκ μιᾶς δὲ πνέομεν ματρὸς ἀμφότεροι, Nemean Ode 6.1-2) while a fragment from Euripides (484) reports that “earth and sky were once a single form” only to separate and then produce creation together. At a fundamental level, destruction narratives project onto the universe the truth of individual life: everything that lives must die.

Hesiod’s story and the fragment from the Cypria alter this understanding by setting human beings as separate and altogether unnecessary creations. We are a burden to the Earth, a threat to the rest of creation. Ancient traditions and modern scholarship have framed “Zeus’s plan” as the destruction of the race of heroes to reset the world. Most receptions understand his action as part of a cyclical process, rather than a certain end.

But ancient narratives added a personal dimension to this. While everything that happens in the Homeric Iliad is allegedly part of “Zeus’ plan being completed” (…Διὸς δ᾽ ἐτελείετο βουλή, Iliad 1.5), the story we actually hear is about leaders who destroy their people by making bad decisions. Agamemnon acknowledges as much, admitting that his avarice and anger sent countless men to their doom (Il. 2.115) and Hektor fears that people will remember him as someone who destroyed his people through his own recklessness.

Much ink has been spilled on the relationship between divine determination and human will in Greek myth. I think that there is an easy way to understand it, but that we avoid it because it cuts a little close to the bone. As Homeric epic shows, there are things in life we can control, and things that we do not. Human life is lived in the space between them. There are always trends or patterns within which our actions seem predetermined; yet, when we make our decisions, they are our own in a significant way.

Zeus picks up this theme at the beginning of the Odyssey where he complains that “mortals are always blaming the gods for their fate, even though they suffer more than they were allotted because of their own recklessness” (Odyssey, 1.32-34). Before standbys like “self-sabotage” or “their own worst enemy”, Greek myth strove to help its audience understand that human beings may not create our own problems, but we actively make them worse.

Epic narratives are far from the only story traditions that explore such bitter lessons. Indeed, the need to explore human folly is central to tragedy’s compelling nature. Since the beginning of the COVID-19 pandemic, I have returned frequently to the storyline of Sophocles’ Oedipus. The point of the play is not to shock ancient audiences with the tale of a man who haphazardly killed his father and slept with his mother. Instead, it is the story of how a leader known for his wisdom not only failed to protect his people from a plague, but actively made their suffering and his own worse through his aggressive denial of the truth.

Oedipus tries to do everything right from the beginning of the play when his people beg him for help against the plague. The tragedy’s sickening power lies in its exploration of one person’s capacity for self-deception. Oedipus Tyrannos does not inspire identification or empathy in the audience because we know what it is like to be a king or steer a city through a plague. It strikes at our hearts because we each know in some small way the cost of refusing to unmask our own lies.

COVID-19 can–and should be–framed because of a dangerous relationship between humanity and the environment. Our overpopulation, pollution, and destruction of ecosystems make future pandemics more likely rather than less. Countries like the US and UK have seen little better leadership than that offered by Agamemnon and Oedipus over the past few years. I am deeply worried about our capacity to face these coming dangers.

A common refrain from ancient Greek singing songs is that none of us knows what tomorrow will bring, yet it is certain beyond any doubt that each of us will die. I am uncertain that the ancient Greeks had a qualitatively different view of mortality from our own, but I am sure that they would not be likely to toast the end of humankind in its entirety.

Ancient Greek myth and literature may seem like a useless weapon against climate change, yet it remains an important tool for helping us understand how we brought ourselves to the brink of destruction. Our capacity for denial can be seen as a necessary talent: how else could we go about our daily routines without the ability to avoid thinking about our inevitable ends? What Greek myth provides, however, is a way of thinking through the consequences of denial and the social costs when those whom we trust to lead us cannot and will not face the most important challenges of our time.

At the creation of the universe, Greek myth teaches us we were a part of the earth, an extension of it. Generations later, we learn that humankind in its most glorious and overreaching form turned out to be a burden to the land. So the gods decided to kill them all. My one hope is that Zeus’ complaint about human beings from the Odyssey contains an unspoken corollary: if we make our fate worse than it had to be through our recklessness, perhaps we can make things better in turn through intelligence, diligence, and care for one another.

Our selfishness and foolishness puts us all at terrible risk. And if we don’t change our ways, there will be no one left to tell our story.

Joel Christensen is Professor and Senior Associate Dean for Faculty Affairs at Brandeis University. He has published extensively and some of his work include Homer’s Thebes (2019) and A Commentary on the Homeric Battle of Frogs and Mice (2018). In 2020, he published The Many-Minded Man: the Odyssey, Psychology, and the Therapy of Epic with Cornell University Press.