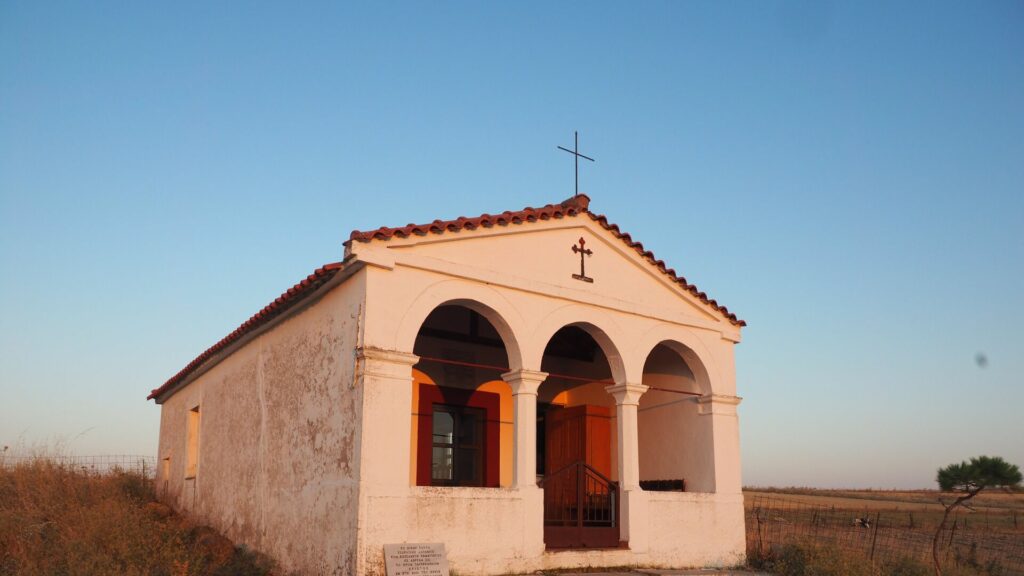 One would think that after one hundred years there was not much more to be found in the history of the Greek Island of Lemnos’ involvement in the Gallipoli campaign of 1915-16. But you would be wrong. Recently I re-visited the Northern Aegean Island and assisted by some intrepid locals was able to locate the site of a former Allied cemetery. This is the story of that discovery.

There are three Commonwealth War Cemeteries on Lemnos, well known to commemorative visitors to the Island. These are East Mudros, Portianos and the West Mudros Muslim War Cemeteries. All were created during the Gallipoli campaign. However ever since I discovered a reference to a fourth Allied war cemetery on Lemnos I have been intrigued to find its location.

The location of this cemetery was revealed to me first by a reference to it on the British military map of the area to the west of Mudros Bay held in the National Archives in London. This is the definitive identifier of much of the Allied presence in this area during the campaign. It identifies the location of the many medical facilities in the area, including the two Australian field hospitals – the 3rd Australian General Hospital and the 2nd Australian Stationary Hospital. It also cites the various supply bases, military piers and other infrastructure created as part of the Allied camp there.

The first clues I came across that hinted at another military cemetery was revealed on the British Army’s West Mudros Map held in the National Archives in London. This map showed that to the south of the main camps on the Turks Head Peninsula (now referred to locally as Pounda), between the villages of Portianou and Tsimandria, identification markers for both a “Square Tower” and just to the north a “Military Cemetery.” The “Square Tower” is also identified at the same location on the British Royal Navy Lemnos Survey Map from 1916 held in the British Library.

The operation of this cemetery appears to have coincided with the August Offensives on the Gallipoli Peninsula and the extension of Lemnos’ medical facilities to West Mudros.

Nine soldiers are recorded as having been buried here, five British soldiers and four Australians. The first burial occurred on 15th July 1915, with the burial of Private J. Hall of the Yorkshire Regiment’s 6th Battalion. Three of the Australians were buried on 9th August, the fourth the next day. The Australian soldiers were Private Eric Blomqvist (also known as Bloom), Private Thomas Henry Howe, Private Richard Henry Philip Jones and Private Alexander Carnochan. The burial service for all these Australians was conducted by Lord Ennismore, a British military chaplain.

Eric Bloom is the first death recorded in the 3rd Australian General Hospital’s register held in the Australian War Memorial. A former sailor, 28 year old Eric is the sole Swedish-born Australian soldier buried on Lemnos, having been born in Stockholm rather than Aberdeen in Scotland as he referred to on his enlistment documents. Eric’s service file reveals that he suffered a severe gunshot wound on the 8th August and had already died when he arrived at the Hospital the following day.

Thomas Howe was a 31 year old bricklayer from Erskineville in Sydney who enlisted in April 1915. He suffered gunshot wounds to his arms and legs on 8th August, dying the following day while being treated at the 2nd Australian Stationary Hospital on Lemnos. He has been at the front for only two days before receiving the wounds from which he would die.

South Australian-born Richard Jones was a 33 year old labourer when he enlisted at Kalgoorlie in Western Australia. He suffered a gunshot wound on 7th August and died while being treated at the 3rd Australian General Hospital on 9th August. Sadly missed, his mother wrote to the Australian military to request an additional 24 copies of his grave on Lemnos.

Alexander Carnochan was over 43 years old when he enlisted in Queensland, an English-born former French Polisher with over 16 years previous military service with the Royal Scots and territorial forces in the United Kingdom. Wounded in the abdomen on 9th August, Alexander died while being treated at the 2nd Australian Stationary Hospital on Lemnos the next day. He left behind his wife Edith and two daughters – Iva and Vera – in London’s Camden Town.

All of these men – British and Australian – were subsequently re-buried at the nearby Portianos Military Cemetery after its establishment in August. There is no formal record as to when the Old Square Tower Cemetery was abandoned but no other Allied service personnel buried on Lemnos record their having been initially buried there. It must be assumed that for whatever reason, this fourth cemetery was opened in July and closed around mid-August.

What does it matter, finding the location of a former cemetery? Despite the fact that these nine soldiers were subsequently re-interred, their first burial was at the Old Square Tower Cemetery. I believe that this should be remembered and identified as part Lemnos’ Remembrance Trail. The ground in which they were laid should not be forgotten.

It is with this sentiment that I sought the help of my fellow researches on Lemnos – the Koutsaplis sisters of Tsimandria, photographer Pat Miner and Mario Sanz Garcia. Soon we were able to identify a solitary tree on the rise of a hill to north of Tsimandria off the road to Portianou. The tree appeared to have taken root many years ago within the bounds of some stone structure.

Closer inspection revealed that the stone structure was indeed square. It comprised both large and small stones, cemented together. It was a planned structure, no random pile. Was the structure originally a well? Was it a look-out tower from some distant past? We may never know. But what we do know if that this is the Square Tower structure identified on both the Allied maps from the Gallipoli campaign referred to above.

Looking down from the Square Tower, towards the Turks Head Peninsula, I surveyed the ground that would have contained the graves of the nine soldiers buried temporarily in the war cemetery established there. I have yet to discover any photographs of the cemetery, if they exist. But this was most probably the location of Lemnos’ lost WW1 cemetery.

During its operation this cemetery would have been near the centre of one of main zones of activity for the Allied forces on Lemnos. To the north were the medical facilities of the Turks Head Peninsula, stretching down to the coast not far from the Old Square Tower. Soldiers conducted route marches in the area. The nearby secondary port of Diapori was also used by the Allies. And the villages of Tsimandria and Portianou were visited and photographed by Allied service personnel.

Looking at the photographs of two of these Australian soldiers – staring at the viewer out of the images, reading the reports of their deaths and the listing of their burials at the Old Square Tower Cemetery reminds one that in researching military history we are connecting with the story of the lives of real people. These men lived real lives in Australia – some across the globe like Eric Blomqvist – with caring families who would miss them as they enlisted and sailed off to war. They arrived at Lemnos’ great Mudros Bay, gazing at its hills, fields and villages, maybe coming ashore for military drills and meeting some of the local Lemnians. But they would all be not long for this earth. They would be wounded at Gallipoli as so many others were and they would die on Lemnos. They should be remembered – as should their initial places of rest. It is hollowed ground. How appropriate that an old Church – Agios Christos – is located nearby the Old Square Tower.

Along with the Koutsaplis sisters, I look forward to the day when the location of the Old Square Tower Cemetery takes its rightful place on the Lemnos Remembrance Trail that is to be established on Lemnos to aid commemorative visitors. Eric, Thomas, Richard and Alexander – and their decedents – deserved no less.

Jim Claven is a trained historian, freelance writer, published author and Secretary of the Lemnos Gallipoli Commemorative Committee. He has been researching the Hellenic link to Australia’s Anzac story across both world wars for many years. He recently re-visited Lemnos during a field research trip to Greece and thanks Liza Koutsaplis, Pat Miner and Mario Sanz Garcia for their assistance. His most recent publications include Lemnos & Gallipoli Revealed and Grecian Adventure. These can be purchased by contacting him via email at jimclaven@yahoo.com.au.