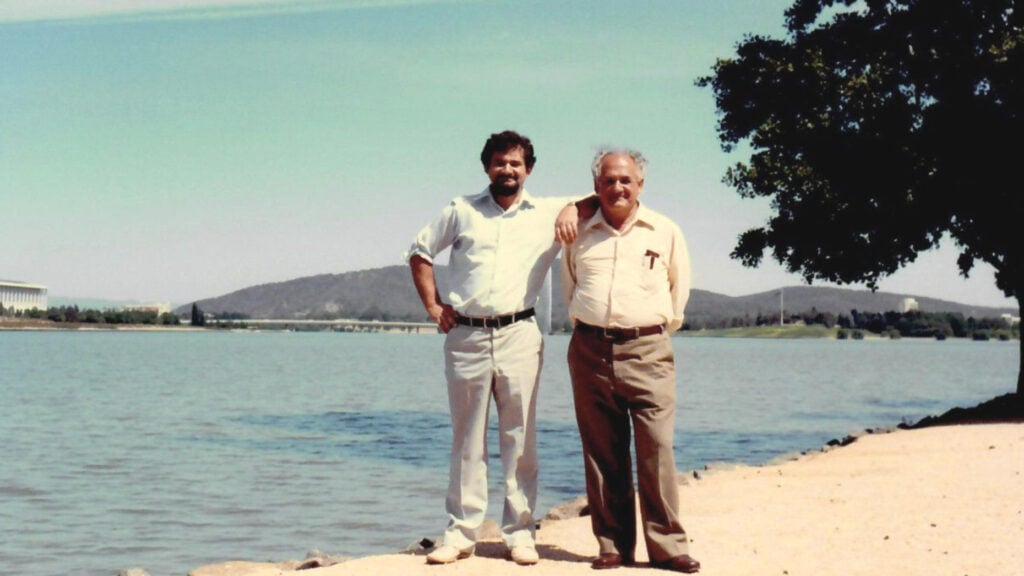 Con Pagonis with his father Nicholas on the shores of Canberra's Lake Burley Griffin fourty years ago, in 1982.

My father, Nicholas, was born nearly 100 years ago, in 1923, to Paraskeva and Lefki Pagonis; and lived his childhood in the Cypriot township of Arathipou, near the port city of Larnaca. Nick, as he was known to everyone, lived his adolescence and adulthood in Melbourne.

Nick Pagonis made considerable contributions to industrial politics in the 1950s and 60s as a union delegate at the Commonwealth Aircraft Corporation – including helping to extend the Avon Sabre production run for the RAAF. In retirement, he played a dedicated role in providing care for elderly Greek-Australians. He died from cancer fifteen years ago; he was 83.

Our family name “Pagonis” was in fact a nickname for my great-grandfather, Nicola Mihailas. He was a proud man who whistled badly as he made his way to work in the fields outside Arathipou and was dubbed “the Pagoni”, which means the peacock. Within a generation it became the formal family name!

When my father Nick was three years old, my grandfather Paraskeva migrated to Australia seeking a better life for his family. He travelled alone planning to quickly earn enough to bring his young family to join him Australia – wife Lefki and two sons Nick and younger brother Varnavas. The unanticipated Great Depression impacted dramatically on family plans, and it was another nine years before they had the financial resources to be reunited. I first visited Arathipou as a 23 year old in 1975; and again with my Uncle Varnavas in 1989. Through the latter 1920s and early 1930s the hardships endured by the family during these formative years had a life-long influence on my father’s values and philosophy of life, particularly his deep sense of social justice. My grandmother Lefki, and young sons Nick and Varnavas lived on the income my grandmother earned as a dressmaker in a largely barter local economy. At one point the taxman confiscated her sewing machine in lieu of unpaid taxes; but other villagers rallied to make the payment and retrieve her only means of earning a living. National Archives of Australia records show Mrs Lefki Pagonis and two children arrived in Melbourne on the vessel Viminale in April 1936. They disembarked at what we now call Docklands, at Victoria Dock.

Following the family’s reunion in Melbourne, Australian-born brothers, my Uncles Jim and George, arrived in quick succession as the family consolidated their new life in Carlton. Nick overcame the challenges of arriving in Australia with no English language ability commencing his Australian education at the former Faraday Street Primary School, located on the corner of Swanston Street. From the schoolyard, across Swanston Street, he could see the Melbourne University campus. I can remember him telling me more than once that he would have given his right arm for the opportunity to go to university. He continued his secondary schooling with energy and purpose at the Collingwood Technical School in Johnson Street (now the Collingwood Yards cultural precinct).

Through their adolescence in the late 1930s and early 40s, the young Nick and Varnavas helped in their parents’ family businesses – first the Cyprus Cafe in Lygon Street near Trades Hall, which was later compulsorily acquired for the South Carlton Post Office (No. 113-119); and then at the Limassol Cafe at 264 Russell St, just a few doors up from the Greek Centre of Contemporary Culture. Limassol Cafe subsequently became the “Little Lamb” provincial Chinese restaurant. My partner Julie and I went there for a meal a few years ago – upstairs in what used to be my father and uncles’ bedroom!

These were the first Cypriot Cafes in Melbourne. Many newly arriving Cypriots, of both Greek and Turkish heritage, stepping off migrant ships at Princes and Station Piers back then will have memories of staying upstairs at “The Limassol” for a few nights until they could find longer-term accommodation. For many, in the early days of the Cypriot community in Melbourne, the Limassol Café was their community social hub. Prior to WWII, the local Cypriot community numbered only around 600.

At eighteen years of age, and following the outbreak of the Second World War, my father joined the Royal Australian Air Force in 1942 and was stationed at various bases around eastern Australia. His first overseas posting into the Pacific theatre in 1945 was cancelled abruptly following the dropping of the atomic bomb on Hiroshima. In the RAAF, and through further study at the RMIT (which he continued in later life) he set out on what was to become his professional career in aviation electronics.

After WWII and an interlude working on the construction of the Kiewa Valley Hydro Electric Scheme in N-E Victoria, Nick resumed his aviation industry career working for over 35 years with the Commonwealth Aircraft Corporation (CAC) at Fisherman’s Bend by the Yarra River in Port Melbourne.

In 1950 Nick married my mother, Helen Diakakis. Helen was born in Melbourne in 1930. Her parents had been displaced from what is now Turkey in the aftermath of the First World War along with over a million others of Greek heritage whose families had been living in Asia Minor for generations over the preceding centuries. Read their story here. Nick and Helen lived for four years in my maternal grandmother Argyro’s South Melbourne house in Cobden Street before moving to Bowen Street in Chadstone where they raised their three children, myself, Con (b.1952), and daughters Leigh (b.1955) and Catherine (1958-2018).

My maternal Grandfather Constantine, who I was named after, and Grandmother Argyro, had resettled in South Melbourne in the late 1920s with a good number of others displaced from the township of Alatsata, in the then province of Smyrna (now Izmir). My Australian-born mother Helen grew up in this Greek-Australian community in South Melbourne. I was born in 1952 at the old Avonhurst Hospital in Queens Road opposite Albert Park Lake; and spent my first two years living in my grandmother’s house on the corner of Cobden and Kings Streets (the house was later demolished when Kings Street, coming down from the CBD, was widened to make Kings Way).

The young Pagonis family followed the typical newer migrant pattern of moving from the inner city out to the suburbs, in our case to Chadstone, just one street away from where the first modern “shopping mall” in the southern hemisphere would be built ten years later. I can still remember the Chadstone Shopping Centre site when it was just a large cattle pasture with unsealed footpaths around it.

Through the 1950s working at CAC, my father Nick’s social justice values came to the fore. He became active in industrial politics and was elected the Electrical Trades Union “Shop Steward” in 1952; and later the Secretary of the Inter-Union Area Committee representing the whole CAC workforce. He was also active in the Communist Party of Australia up until 1968 when increasing disillusionment with the Soviet Union’s oppression of Eastern European countries (particularly the invasion of Czechoslovakia) resulted in him stepping back from political activism.

In 1956 Nick led a delegation of workers’ representatives to a Canberra meeting with Prime Minister Robert Menzies, Opposition Leader Dr Evatt and other prominent parliamentarians. The meeting was facilitated by MP for Melbourne Ports, Frank Crean, who was subsequently instrumental in establishing the South Central Region Migrant Resource Centre, later known as New Hope.

This was the Prime Minister’s first ever Canberra meeting with a delegation of industrial workers in Parliament House. The delegation successfully advocated on behalf of Australia’s aviation workforce against the pressures of imports on the domestic industry. This drew significant public attention at the time, including a front-page headline in the Melbourne Age newspaper. Following this meeting the Australian Government extended the production run of the Avon Sabre aircraft fighter by 20 aircraft, tiding the domestic aviation industry over until they subsequently announced that the next military aircraft to be constructed at CAC would be the French-designed Mirage III.

Nick continued post-secondary computer electronics studies at RMIT and was promoted to the position of CAC’s Electrical Superintendent. Sponsored by CAC, in 1976 he went on a study trip to Boston to learn more about aviation electronics at MIT, and on to the Olivetti headquarters in Milan for further computer studies.

In retirement Nick took on volunteering work with the Australian Greek Society for Care of the Elderly (now Fronditha Care Inc.); he was a Board member from 1989–1994. In 1997 he was awarded a Life Governorship by Fronditha for his “ongoing support and tireless commitment”. His daughter, my sister Leigh (named after our grandmother Lefki), was an active early Fronditha Board member from 1978 to 1990. My mother Helen was a Fronditha volunteer and active fund-raiser for over 20 years. Both Leigh and Helen also became Life Governors of Fronditha. Nick is in the front row, second from the right, with Governor-General Bill Hayden AC, his wife Dallas and the Fronditha Board.

Nick Pagonis died from cancer in May of 2007. From humble beginnings in the Cypriot village of Arathipou, he went on to live a full and rewarding life in Melbourne, always contributing, curious to learn more, philosophical and steadfastly optimistic.

This article is updated from a chapter in “Recalling the Journey” – an illustrated e-book collection of stories by and about migrants and refugees who came to Melbourne by sea up to the late 1970s; edited by Lella Cariddi OAM. The book was e-published in February 2017 under the auspice of Multicultural Arts Victoria’s What Happened at the Pier project. It is available as a free e-book (see pp. 79-83).