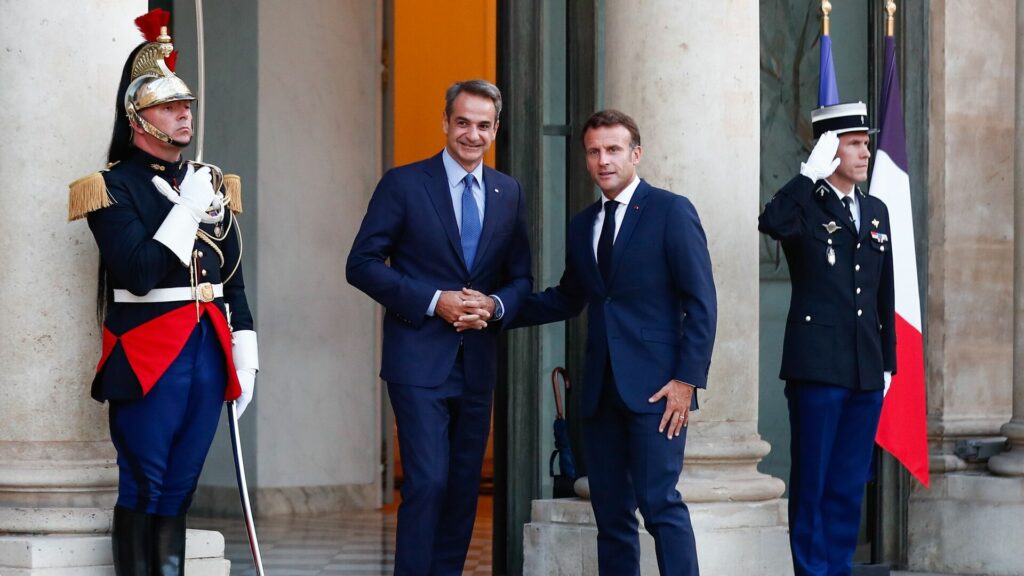 Commenting on the the escalating tension following provocative statements regarding the Aegean from Ankara, French President Emmanuel Macron stressed that the strategic partnership agreement between Greece and France is a strong stabiliser in the wider region.

“This strategic partnership will not allow any unrest in the Eastern Mediterranean,” Mr Macron said during his meeting with with Prime Minister Kyriakos Mitsotakis at the Elysee Palace in Paris.

“Both countries are stronger together,” he said, highlighting that “We fully support Greece’s sovereignty”.

Mr Macron said that full cooperation on foreign and defence policy and armaments is now more important in the face of challenges, the war in Ukraine, migration flows and the situation in Libya. The central focus of the talk, however, was the energy crisis and the search for common ground in the EU ahead of the Informal Council in Prague on 6 and 7 October.

“We agree on many issues, both on prices and on the need to multiply energy sources,” said Mr Macron.

Both leaders agreed that their bilateral relations with the strategic partnership signed last year being the main focus, are helping to form “solid foundations” for the future of the European urging other EU leaders to address the multidimensional challenges it faces.

In turn Mr Mitsotakis went on to send a message to Ankara from the French capital in response to the Turkish leadership’s repeated provocative statements.

“Those who say that they will come in the night, we are waiting for them in the daylight, where it is shown who has the right and true power on his side,” he said.

He also spoke in favour of separating gas prices from electricity prices.

“We agree on the need to establish regulations to minimise energy use as well as support programs to ensure individuals are not left vulnerable,” Mr Mitsotakis said.

Before closing the meeting, the French President thanked Greece for its help in dealing with the devastating fires that hit France this summer, stressing the importance of the common European mechanism for civil protection and disaster response.