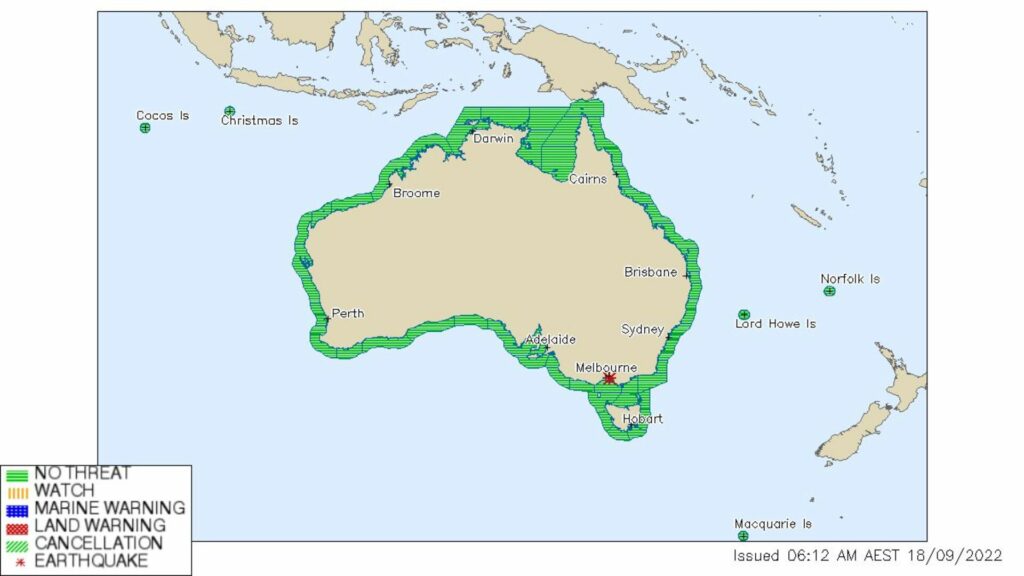 An earthquake of 2.2. magnitude was felt near Melbourne on Saturday, but there is no tsunami threat to Australia, according to the Bureau of Meteorology. Image: BOM/Twitter.

A magnitude-2.4 undersea earthquake struck Port Phillip Bay on Sunday morning. But the Bureau of Meteorology says there is no threat of a tsunami.

Dozens of residents in Frankston, Langwarrin and Cranbourne reported feeling the quake effects which struck at 5.41am

By 8:30am, almost 200 resident reports had been submitted to Geoscience Australia. but no damages had been reported according to the Victorian State Emergency Service.

If you felt this earthquake you can let GA know at https://t.co/40HZzlLVUq

The earthquake epicentre was near Frankston and occurred at a depth of about 6 kilometres.

The BOM’s national no threat bulletin was issued just after 6am. No further updates were expected unless the situation changed.

This time last year, a record-breaking 5.9 magnitude quake – reportedly the largest experienced in the state of Victoria – hit near Mansfield, 180km north-east of Melbourne.

Several aftershocks were recorded following the earthquake, of up to 4.1 magnitude.