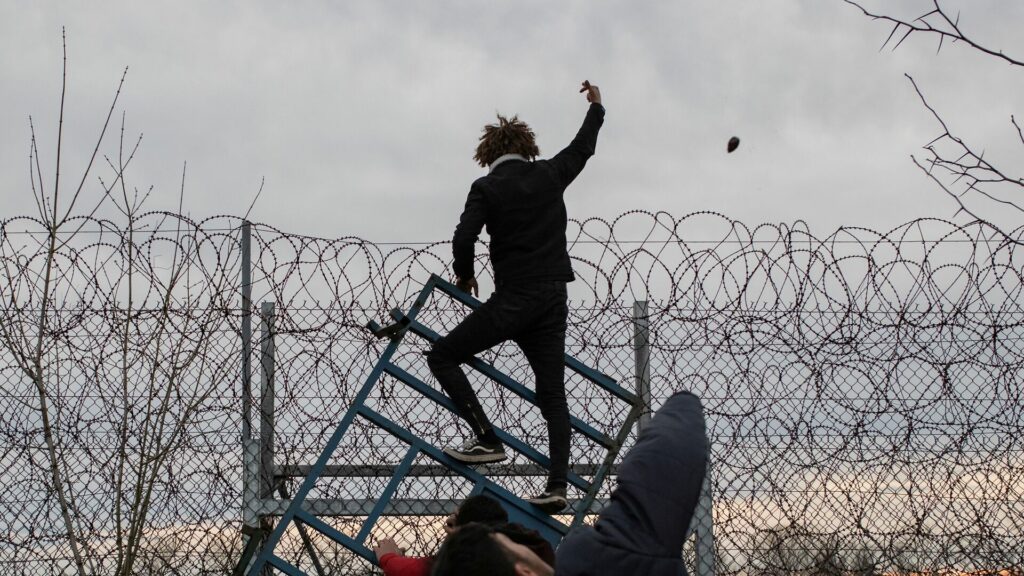 A migrant throws a stone, while others climb a fence at Turkey's Pazarkule border crossing with Greece's Kastanies, near Edirne, Turkey, in March 2020. Photo: AAP via REUTERS/Marko Djurica

A Telegram group titled ‘Caravan of Light’ created on 4 September, had been secretly mobilising Syrian refugees in Turkey to enter the European Union.

The group that now has more than 85,000 has come under the radar of Greece’s Migration and Asylum Ministry.

Minister Notis Mitarakis said that he has briefed the UNHCR, the United Nations’ refugee agency, as well as the EU’s Frontex border management agency and the European Parliament.

An early post called for refugees with healthcare experience to assist in the “march through to the EU”; another was a detailed list of supplies that participants should have.

Kathimerini contacted one of the group’s moderators, who responded, in writing.

The man, who communicated in fluent English, introduced himself as a 46-year-old Syrian with a graduate degree in cybersecurity.

The moderator said that the group was set up after Turkey started deporting Syrians back home while also planning a voluntary repatriation program.

“The Turks”, he said, would leave the Syrians “at the mercy of dictator [Bashar al-]Assad” and his militias.”

He also denied any connection with Turkey or a political party. “I assure you we are not traffickers,” he said, adding that they “are not funded by anyone”.

It is not the first time that such online groups have been created, according to Kathimerini.

They had already existed in 2015, the year of the greatest migrant and refugee influx into Europe. Back then, Turkey had intercepted many migrants near the border city of Edirne and prevented them from crossing.

In 2020, when Turkey attempted to push tens of thousands through the Greek border, many groups had sprung up, falsely stating that the borders were open.