Intrigued? Expect an immersive culinary experience, an international duo performing live, and a Byzantine music masterclass for all levels 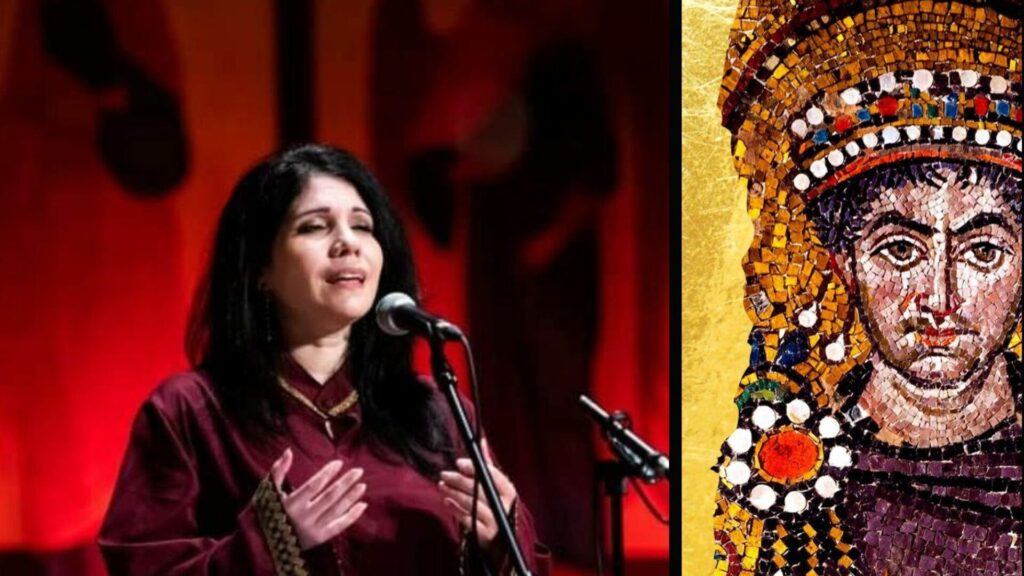 Nektaria Karantzi will travel from Greece exclusively for the Hellenic Museum's Between East and West three-day event of Byzantine music and food. Photos: Supplied

The gilded glory of the Byzantine empire will come to life in a three-day celebration to be hosted in October at Melbourne’s Hellenic Museum.

Greeks and Philhellenes are promised a taste of the era’s music, storytelling and gastronomy spread out across three evenings.

The inaugural event kickstarts with a feast of historical delicacies.

Presented by Melbourne restaurant Epocha, Dining Traditions: A Byzantine Banquet is the result of a collaboration between Chef Petros Dellidis, and Epocha’s partner Disa Dimitrakakis, and Hellenic Museum CEO and Head of Curation, Sarah Craig.

What to expect? A five-course meal featuring Byzantine hero ingredients, including honey, pepper, garum, safron and figs. Each course will be introduced with a brief crash course on how history was captured has been captured on the plate. The evening wraps up with a female chanters’ performance, performed by the Psaltries Choir of Melbourne and led by internationally acclaimed vocalist Nektaria Karantzi.

The duo travels from Greece, off the back of a European tour, for the Hellenic Museum’s three-day event.

What to expect? Two hours of live performance at the Museum’s courtyard pavillion, where East meets West in music culture. The on stage nexus of grand piano and voice by Karantzi and Tsabropoulos is supported by the Holy Trinity Brunswick – Serbian Orthodox Church Choir.

If you’re keen to practice Byzantine vocals, why not do it under the guidance of the Worldwide Association of Women in Byzantine Music founder who has run masterclasses in places including the Liszt Academy of Hungary, France’s Sorbonne University and Spain’s University of Oviedo?

What to expect? A three-hour Masterclass designed by Nektaria Karantzi for students of all abilities, from beginners to advanced Byzantine chanters.

For more information on the three-day Byzantine celebration visit www.hellenic.org.au/between-east-and-west