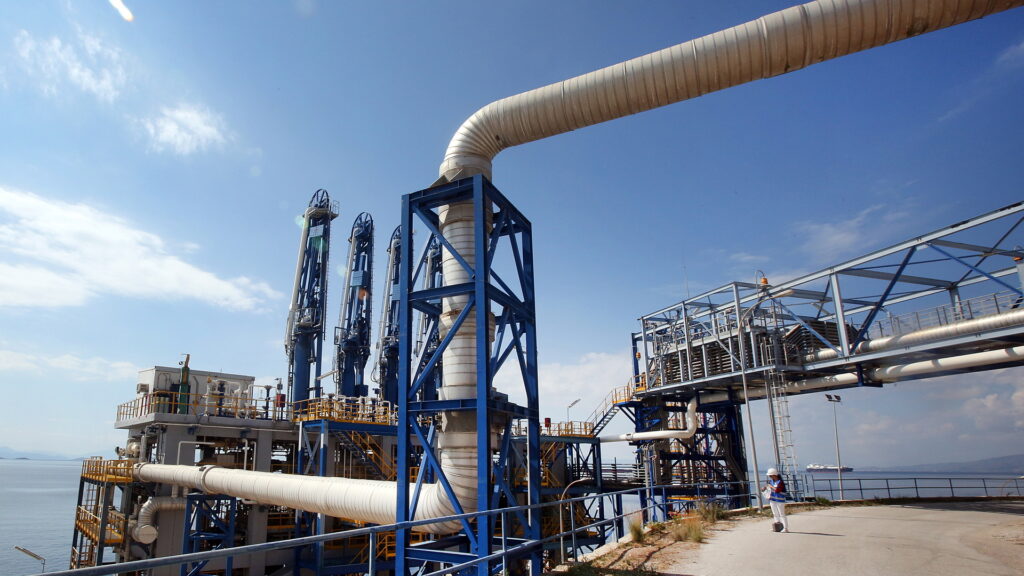 The Liquid Natural Gas (LNG) Terminal on the islet of Revithoussa, Greece, The terminal's three tanks have a total storage capacity of 225,000 m3 LNG, with a regasification rate of 1400 m3/h. Photo: AAP/ Orestis Panagiotou

Greece’s biggest gas utility, DEPA Commercial, just clinched a deal with TotalEnergies for the supply of liquefied natural gas (LNG) over the winter months if needed, the Greek energy ministry said on Thursday it was reported in Kathimerini.

Concerns over high heating and energy costs in winter have been worrying Greeks. This deal seeks to stave off the reliance on Russian gas and it hopes to limit the rate of price hikes on energy.

The deal stipulates that TotalEnergies will supply Greece with two LNG cargoes a month for five months until March 2023, the ministry said in a statement

The total LNG that would be delivered for the five months would be 10 terrawatt hours (TWh), though Greece reserves the right not to purchase the gas but pay a cancellation fee.

A deal price was not disclosed, but the ministry said Greece would buy the gas at a benchmark price rather than the highly TTF price.

“It’s a deal of key importance for the country’s energy supplies in the event gas flows from Russia are curbed or halted,” the statement said.

Greece has been receiving Russian gas via the TurkStream pipeline, which also delivers to Hungary via Serbia.

Athens has been working to reduce its reliance on Russian gas, ramping up LNG supplies and reopening some coal-fired power plants while also preparing to switch some gas-fired stations to diesel.