Refreshingly forthright, Alabama-based Author Theodore Pitsios writes unforgettable stories about Greek immigrants. His experiences in the merchant marine, and running a company he founded, as well as his pursuit of the American Dream, imbue his stories 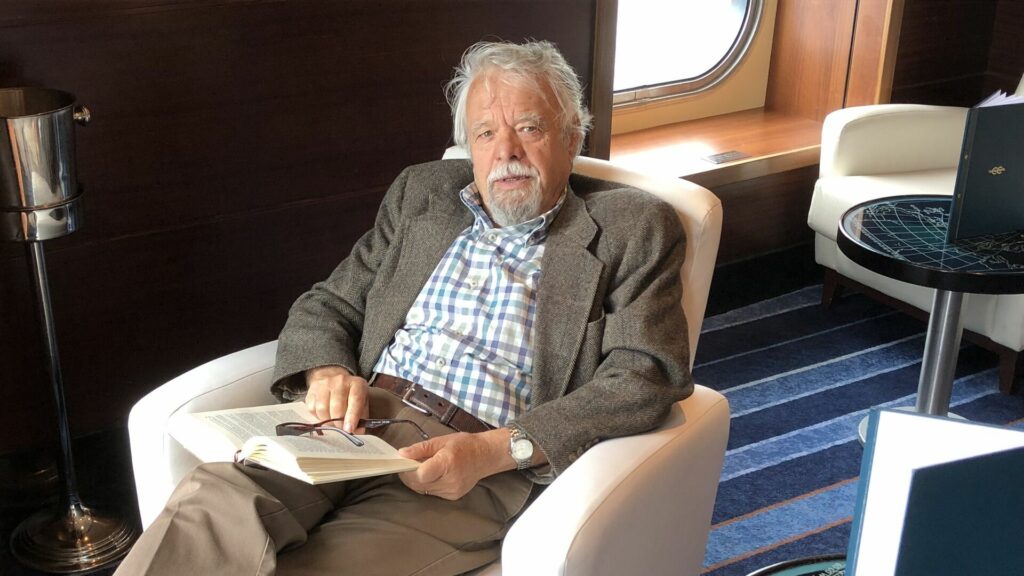 The oldest of three children, Theodore Pitsios was born in Tsagarada, Greece tucked in the lush forest atop Mount Pelion. The largest village on the mountain, it’s also known as home to the largest and oldest plane tree in Europe. Pitsios’ father ran his own trucking business, transporting goods between villages, no doubt instilling a strong work ethic in the next generation.

“Life in the village was typical,” Theodore Pitsios shared. “We tended to our goats and sheep, and the gardens.”

There was only one high school on the mountain and there he made a decision that set the course for his life.

“During my third year of high school, there was a shortage of maritime officers, and the Greek government decided that young men could join the maritime academy after three years of high school. I passed the test and took advantage of the opportunity to leave the village and see the world,” the author says.

After four years of study at the maritime academy in Lamia, Pitsios joined the merchant marine. As an engineer, he sailed the world with freighters, tankers, and even cruise ships. After three round trips from the Persian Gulf to San Pedro, California, he longed for change. He “accidentally” missed that ship and found himself reassigned to another, trading primarily in the Caribbean, on which he stayed for one-and-a-half years. From there, he worked for one year on a cruise ship. He’d visited towns on leave from the ships and enjoyed “playing tourist”, but initially, he hadn’t planned to stay in the U.S.

While in New York on leave, he went to see a Greek film, but it had already started, and he could not enter. He walked across the street to the union hall for merchant seamen, to wait until it was time for the next show. There, he learned about a job in Miami. Hurricane Betsy had washed up a Greek freighter near West Palm Beach, and the salvage master had requested a Greek engineer, as all the labels and manuals were written in Greek.

“I wasn’t sure if this was for me anymore, but the snow was knee-deep in New York and the man on the phone said the women were swimming naked next to the ship. I was at LaGuardia Airport before he hung up,” he says with a chuckle.

While working on that job, he met his beloved late wife, Brenda.

After moving to the Bahamas for several years, they settled in Brenda’s hometown, West Palm Beach, and embarked on a new venture, the start of their American Dream.

“We bought a restaurant, and the plan was for my sister-in-law to manage it. Ultimately, she couldn’t, so we ended up running it. This wasn’t for us, so after a year, we sold it and moved on.”

Pistsios worked in shipyards in Fort Lauderdale, then moved to the Gulf Coast. During this time, he attended a nearby university and studied mechanical engineering. He then found work at a maritime consulting firm, and later started his own company, Universal Marine Services in Mobile, Alabama. He and Brenda welcomed three daughters.

Pitsios has always loved telling stories, and about thirty years ago, began committing them to paper. On suggestion from a family friend, a university professor, he took creative writing classes, to not only improve his spoken English, but to help him write it better.

Inspired by trips back to his village, Pitsios’ first novel, The Bellmaker’s House (Cosmos) was published in 2007. It’s the story of Nikos, who returns to his village after years living in America toiling his way to a better life. He expects a hero’s welcome, but what he finds is more than he bargained for.

Pitsios knew many seamen who’d jumped ship and thought it an intriguing premise. His second novel, Searching for Ithaka (Cosmos, 2013), opens in 1965. It’s the story of a merchant seaman from Greece who jumps ship in Miami. Kostas Karaoglou seeks a better life, but as an illegal, he ends up living in the shadows. In Pitsios’ latest book, Walking in the Light (Koehler Books, 2021), we revisit Kostas and his search for the elusive American Dream. He makes plans, but nothing goes right. When he’s about to throw in the towel, he finds a way, but he has to take orders from a woman, a Cuban refugee. She’s a tough cookie, and Kostas is an alpha male. Can he keep his eye on the big picture and acquiesce to a woman?

These candid stories get to the heart of the experience of illegal immigrants. While we see undocumented workers in the headlines, we don’t often know the backstory. Pitsios’ stories look at immigrants in a new way.

Now an octogenarian, he’s a proud grandfather. And also semi-retired, which allows him more time to focus on two of his passions, acting in community theatre and writing.

“I’m currently writing my memoirs in three parts. There are many, many stories to tell,” Pitsios concludes.

No doubt he’ll tell them with his signature humour.

Pitsios has been a guest on Karis Comedy Corner, Alabama Life podcast, and Troy Public Radio and given book talks at churches and libraries. Learn more at theodorepitsios.com