As with other years, since 1919, all over Australia and Commonwealth Countries around the World, we pause for a minute silence, to remember all those that died in WWI 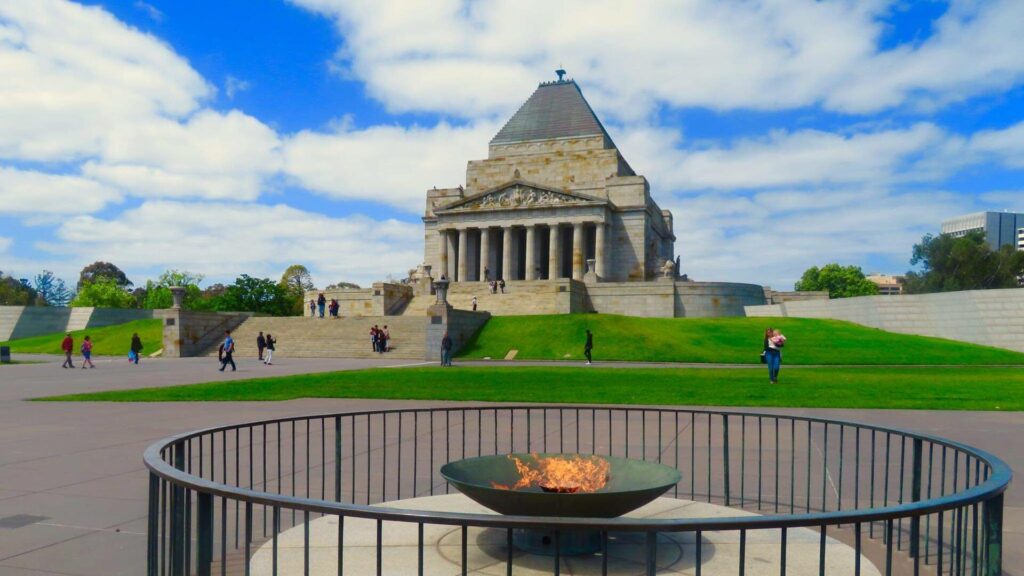 The flame at the Shrine of Remembrance burning strong. Photo: Supplied

On Friday 11 November, the eleventh month of the 11th day at the 11th hour, all over Australia, and the Commonwealth Countries around the world, people will stop for a minute’s silence, to remember the Service and Sacrifice of the fallen in WWI.

Very few families in Australia were untouched by death in this war, and the attempt to make sense of their loss found expression in memorials, rituals and ceremonies across Australia and at the former battlefields. Perhaps in Australia and the British Empire, war memorials had a particularly meaning, because the bodies of the dead remained in the vicinity of the battlefields on which they died. Memorials were created in public spaces in towns and cities, in churches, schools, workplaces and sporting clubs. In Victoria particularly, avenues of honor, a tree for each departing soldier, were planted during and after the war. The first and longest (over three thousand trees) was in Ballarat Victoria. Sometimes clusters of streets and places were named after war sites, for example, Surrey Hills and Balwyn in Melbourne.

The Shrine of Remembrance, after seven years of construction, was opened on 11 November 1934, in the presence of 300.000 People. The dedication ceremony was performed by HRH Prince Henry, Duke of Gloucester, representing HM King George V.

The Shrine was designed by Melbourne architects Phillip Hudson and James Wardrop former soldiers from World War One. The design was inspired by one of the seven wonders of the ancient world, the memorial of King Mausolus at Halicarnassus in South West Turkey 354 BC, and the north and south porticoes are modelled on the Parthenon in Athens Greece 500BC.

The full verse reads “Greater Love hath no man than this that a man lay down his life for his friends”. The stone is placed below floor level, so that no hands may touch it and that heads bow in reverence to read the inscription.

A special feature in the Shrine is the Ray of Light; a beam of sunlight which passes through an aperture crossing the word Love on the stone of Remembrance on Remembrance Day. It took Dr Baldwin, the Government Astronomer and Surveyors, 144 pages of astronomical and mathematical calculations to ensure the precision of the placement of the apertures.Dr Baldwin calculated that the ray will continue to pass the centre of the Stone, within two minutes of 11am on Remembrance Day for at least 5000 years. The accuracy of the calculations was tested on Armistice Day in 1931, when to the relief of surveyors the ray of sunlight fell upon a motar-board where the Stone of Remembrance was to be placed.

The external aperture is covered on all days except Remembrance Day. Just above the Frieze panels on the eastern wall is the internal aperture. On Remembrance Day the shaft of light first appears on the north-west side of the wall surrounding the Stone of Remembrance and the light then moves across the stone.

It takes 11 minutes for the light to cross the stone. Precisely at 11am the light shines upon the word Love in the centre of the Stone. That marks the commencement of one minute of silence (originally two minutes) and the Governor of Victoria lays a Wreath. Those present for the ceremony include the Premier of Victoria, Lord Mayor of Melbourne, diplomats, politicians, Shrine Trusties and Governors, RSL and Legacy representatives and Defence Service Chiefs.

The Armistice to end World War One was signed at 5am on the 11th of November 1918, but it was given a further six hours by the Commanders for the troops to stop firing, before the hostilities on all fronts ended. Thus, Armistice hour is on the eleventh hour of the eleventh day of the eleventh month.

NB. The Armistice was signed in a railway carriage in France of the Allied Supreme Commander, Marshal Foch at Compiegne. (68km north east of Paris).

The Red Poppy is the symbol of Remembrance by all Commonwealth Countries since the end of WWI, to remember the members of their Armed Forces who have died in the line of duty. These Poppies bloomed across some of Europe’s Battlefields of Flanders in WWI. The brilliant colour is appropriate symbol for the blood spilled in the War.

10 Greek Australians in the Australian Forces also died, in World War One.

It is estimated that in World War One, over 40milion lives were lost, Soldiers Civilians.