Sophiya, why are you Greek-rapping in Australia?

The third-generation Greek Australian artist opens up to Neos Kosmos on music, views on duality, and coming out as gender fluid 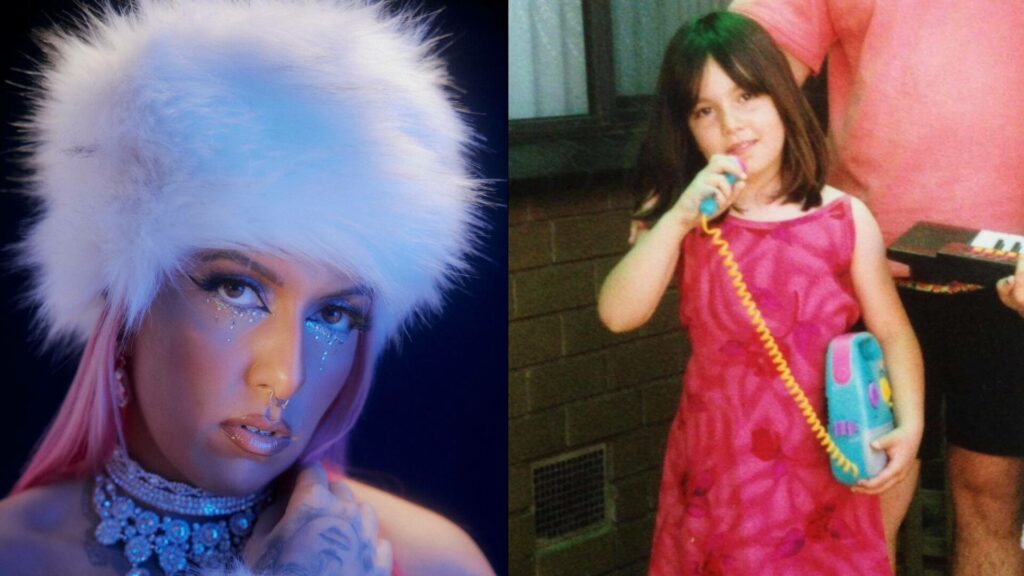 “Do you want to do the interview in Greek or English?” This was the first question, third-generation Greek Australian artist Sophiya asked me when we met for the interview. I found it a bit strange as I am very rarely asked by people raised in Australia what language I prefer- they mostly feel comfortable expressing their views in English.

Sophiya though is fluent in both languages. Born in Kalamata, she moved to Melbourne with her family when she was one year old.

She is the only rapper in Australia that raps in both English and Greek. Her first fully Greek single, “GREEKo FREAKo”, was picked up quickly by Australian tastemaker radio station, Triple J. “It was released on a Friday and by Monday, it was added to full rotation. That’s the first time that’s ever happened to me”, Sophiya exclaims.

“But why ‘GREEKo FREAKo,’ and why a Greek rap song in Australia?”, I ask her.

“This song was about making a statement about myself as an artist. In case anyone didn’t know, I’m Greek. I grew up as a Greek Australian, I can rap in both languages and I’m the first to do that on a national level in Australia.”

The title pays respect to the “Greek Freak”, the moniker of Giannis Antetokounmpo – he’s a huge inspiration, especially for the Greeks abroad. He is an ambassador of our culture all around the world”.

“I know the title is a little controversial because ‘TANGA’ is what the Greeks call a G-string. However, ‘TANGA’ is a term used worldwide, and I wanted fans to connect to it no matter their background.”

Sophiya grew up as most Greek Australian children do. Went to Greek school, followed Greek traditions, and listened to a lot of Greek music.

“Growing up, my parents listened to a lot of Greek music at home, such as Haris Alexiou, Marinella, Stelios Kazantzidis, Vicky Mosxoliou, Giannias, Poulopoulos and Stratos Dionisiou to name a few. But there was a lot of Greek pop as well, such as Sakis Rouvas, George Mazonakis and Anna Vissi-the Greek Madonna.

“I follow the Greek Rap scene and I like artists such as Light and FY. Especially FY, I resonate with him the most – he has an eccentric and charismatic persona. Although there has been an oversaturation in male Trap rappers in Greece since 2019, there are no “femme” artists who can rap and sing in both languages in Greece. ”

Speaking about Greek influences in her art, I couldn’t resist asking about a Medusa tattoo on her hand and her relation to Greek mythology.

“I grew up learning about Greek mythology which inspires me a lot creatively. It’s dark, otherworldly and hypersexual, I really love it. Medusa, for example, was like the first androgynous gangster (she laughs).”

Attached to her ethnic culture, I asked her if she would ever consider moving to Greece permanently.

“I would love to, I envision it in the coming years. I want to establish myself in Australia first, but it’s on the cards.”

Sophiya confesses that her music firstly boosts her own confidence and it’s powerful that other people can relate to it.

“The beat, my lyrics and flow, it’s all about self-confidence and self-worth. I speak my truth and am grateful that I can inspire others to feel the same way about themselves.”

I wasn’t sure if the Greek community would accept me. But the only way to be is to be 100% yourself and bold at that; it’s infectious.”

Sophiya is currently based in Sydney. Apart from professional reasons, she states that there are many more creatives, opportunities, and members of the queer community.

“I have connected with my community here and it feels like home now”, she says.

Sophiya identifies as gender fluid. She feels that she is neither one gender or the other, rather a fluid mix between the two.

“My sexual identity also refers to my core beliefs in life. I just see everything as fluidity and harmony. I don’t believe in absolutes.”

“Even in my music, there is a duality. When I work with any creative, we do everything in collaboration.”

But how was it coming out as gender fluid to her Greek parents?

“My parents are my number one fans. They’ve supported me in ways no one ever will, they’ll always have my back. They’re both teachers too, so if it wasn’t for them I wouldn’t be as fluent in Greek and able to write songs today. I was fortunate enough that my mum let me re-create her hand painted piece – which is Byzantine and Renaissance inspired and took over six months to paint for my single artwork for “KWEEN ENERGY.”