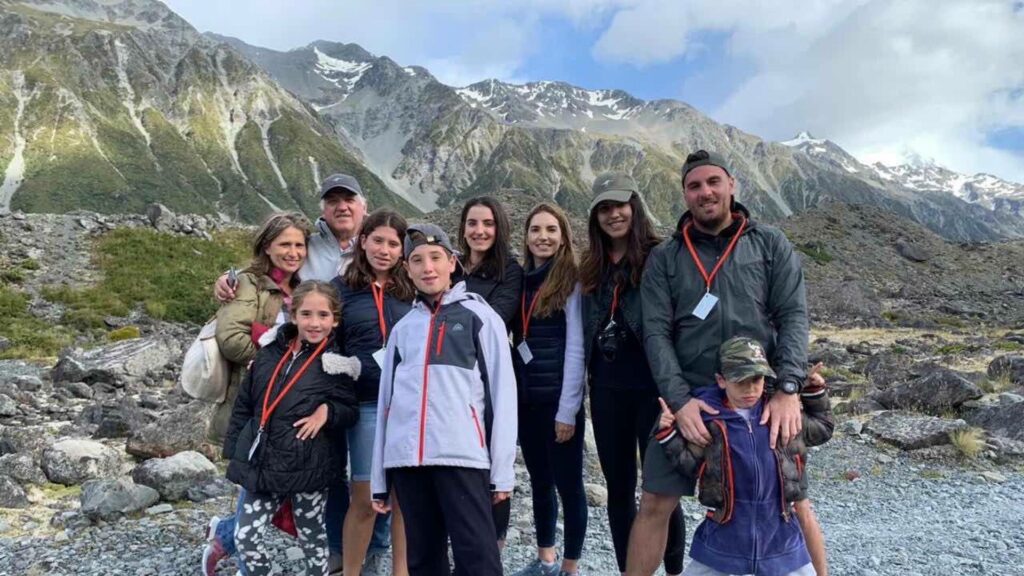 Konstantinos Pantos has eight children, with ages ranging from 9 to 32 (pictured here with him and his partner). All were conceived naturally without assisted reproduction, he reveals. "But I wouldn't say no to IVF if it was needed.". Photo: Supplied/Konstantinos Pantos

Many in the community may know of obstetrician Konstantinos Pantos, the Greek IVF specialist who has maintained personal and professional ties with his Melbourne birthplace.

Asked to sum up the takeaways, Dr Pantos refers to “three accomplishments”.

An initiative for a medical summer school in Kos starting next year is part of the latter.

“So that all doctors can visit the birthplace of Hippocrates and take part in the authentic oath ceremony,” he tells Neos Kosmos.

The Kos initiative, Dr Pantos says, goes hand in hand with the concept of medical tourism, by “consolidating in the minds of potential visitors, the image of Greece as a destination for health and wellness”.

In Greece – and globally – IVF occupies a big part of the pie in travels for medical treatments.

But medical tourism is not just about assisted reproductive services.

“It encompasses other fields, including plastic and cosmetic surgery, dentistry and orthopaedics,” says Dr Pantos and admits on the reason behind the common association with IVF:

“That’s because IVF is linked to the emotional impact of having a child and this in turn attracts a lot of media interest and results in greater publicity.”

Greece, one of Europe’s “baby-maker” hubs

Dr Pantos, founder of an Athens IVF clinic has seen Greece’s reputation grow over the years, including from the Australian market, partly thanks to his collaboration with Melbourne-based fertility specialist Dr Nick Lolatgis.

Australian celebrities who visited his clinic in recent years have played a role in that.

“We’ve helped about 5,000 Australian children to be born so far.

“They send us thank you notes with photos of their babies, or speak publicly like Tania Zaetta,” he says of the Aussie actress whose “miracle” pregnancy made headlines in 2018.

Zaetta, 48 then, told the media she was expecting twins after venturing with her partner to Greece where together with Dr Lolatgis – “the baby-maker” as she referred to him – found an anonymous egg donor who resembled her.

As revealed in an interview, Zaetta made the decision after reading about the experience of Greek Australian comedian Mary Coustas, who gave birth at 49 though IVF co-ordinated by the medical duo.

Coustas’ case was reported by the ABC as “raising the profile of older women travelling to Greece for egg donation”.

Market analysis suggests that the post-pandemic reprotourism share dynamics are still changing. Competition is rife though, with a Grand View Research report revealing that Turkey had “dominated the fertility tourism market with a share of 42.2% in 2021.”

“Greece is now a top destination for what we call medical tourism,” says Dr Pantos.

“There’s couples coming from 67 countries, mainly the United States, Australia, Germany and the UK for a range of procedures, including IVF, pre-implantation genetic testing and egg donations.

“The latter is one of the main applications they come here for from Australia, because there the egg donor’s identity has to be known, whereas in Greece she is anonymous,” he adds.

Greek legislation has recently been modified to also allow for non-anonymous egg donations, but for years Greece has been among countries building a reputation on guaranteed donor anonymity.

“It helps those couples who do not want to have any connection with the donor,” Dr Pantos says.

Legislative frameworks on assisted reproduction, including IVF and surrogacy, differ among countries. But some fertility specialists warn of potential ethical and medical problems posed by not knowing the identity of donors.

In Greece’s recent past, there have been reports of women in vulnerable financial situations being exploited or coerced into selling their eggs.

As well as confirmed cases of related criminal activity, with the most recent one being a 2019 Europol operation dismantling a ring involved in human eggs trafficking, illegal adoption and money laundering.

Beyond anonymity, affordability is also a key reason motivating Australian women to travel to Greece.

“The cost of procedures in Greece is four to five times less than the US cost, and they’re also cheaper compared to the UK,” Dr Pantos says.

“IVF should be last resort for infertility treatment”

Raising the age limit for assisted reproduction to 54 – to reflect the natural capability age of women for reproducing – is among updates enacted in the relevant Greek legislation since July 2022.

“A fact taken into account by the legislation is the increasing number of women wanting to have a kid [with assisted reproduction] after 50, which wasn’t allowed in Greece up until now.”

It is estimated that every year hundreds of Greek couples would make the trip to countries including Albania and Cyprus where the age limit was higher, Dr Pantos says. The modified bill, he adds, also favours reproductive tourism, giving the green light to women up to 54 to come to Greece for IVF.

But even women who are considered too old to conceive children might be able to do so naturally, says the specialist.

“Some women faced with the dilemma should not be undergoing IVF at all; they could be falling pregnant easily by themselves provided they are appropriately informed and take necessary measures in time.

When a couple reaches out to us for help, as doctors we have to carefully assess the cause of infertility and address it. IVF should be the last resort in all our efforts. Quite effective indeed but should be seen as the last process for infertility treatment.”

“Hormonal therapy is a possible intervention too, but it could be even simpler.”

He refers to a patient case, a Canadian woman who after six unsuccessful rounds of IVF fell pregnant naturally in her 40s following a €150 salpingography that unblocked her fallopian tubes.

The psychological impact, however, of repeated IVF rounds on a woman’s health, is difficult to address “with any other way than a successful procedure,” Dr Pantos concedes.

“We just try to ease any discomfort possible when it comes to a couple coming from overseas. Sometimes they stay for a few days, other times they choose to stay for a couple of weeks up to a month.”

Still, many Australian women have made the trip to Greece.

Some of them were present at a Melbourne gathering last week to share their story.

Organised by Dr Lolatgis, “to celebrate Dr Pantos and his clinic”, the event saw couples and their children thanking the Greek Australian specialist “for providing donor eggs” for them and making their fertility journey possible.

“There were many couples with their children, we took pictures together, they expressed their gratitude, and also met some couples who will be coming to see us in the next few months.”

Among them was a woman who lived through two liver transplants, had her two children through IVF and is now five months pregnant (also from IVF).

“It is a really rare incident and when the third child is born we will make a scientific publication to showcase the value of IVF in cases of organ transplantation.”

Asked whether he remembers every couple coming from Australia, due to his connection with the country, Dr Pantos admits “it’s not possible, when conducting around 40 to 50 rounds of IVF daily.”

“But sometimes there’s those stories of couples that stay in your mind about their efforts to have a child. We just try to satisfy their expectations and give them the right to a child.”