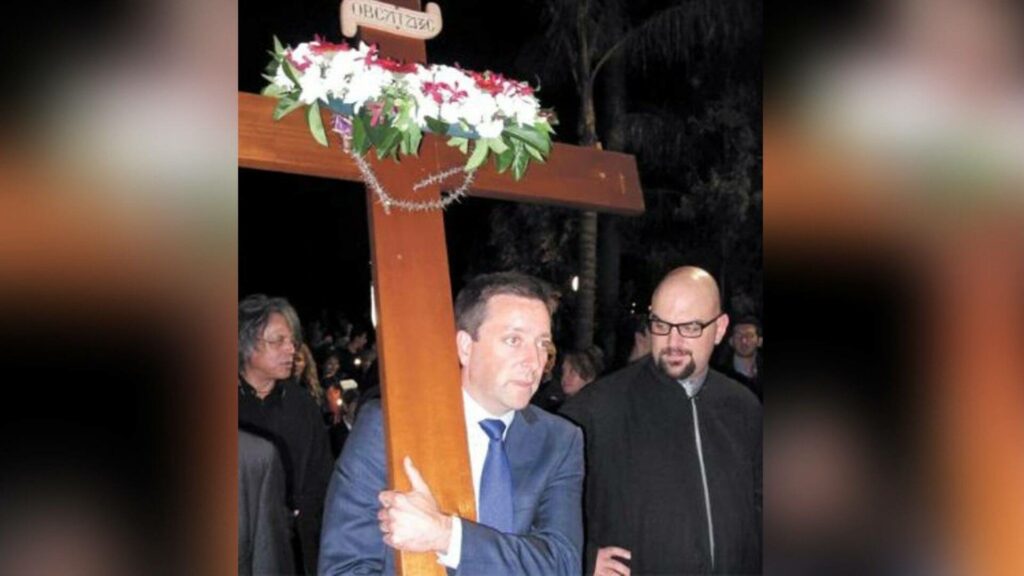 This is the second time Opposition Leader Matthew Guy steps down from the role of the Victorian Liberal Party leader following an election loss. Here in a symbolic past photo, carrying the Cross during a Good Friday procession at St Haralambos church in Templestowe. Photo: Supplied/NK Archive

Victorian Opposition Leader Matthew Guy has announced he will not by putting up his hand for the position of leader at the upcoming party meeting.

“As soon as it is clearer which Liberal Party candidates will form the next parliamentary party room, I will call them together to elect their new leadership team,” he said in a statement released on Sunday.

“I will not be a candidate for the position of leader.”

The decision to step down from the role comes after a sweeping Labor victory sees Dan Andrews securing a third term in office.

Mr Guy phoned the Premier on Saturday night to concede.

“I’ve never had to make one of those calls,” Mr Andrews, who waited for the call before declaring victory, told reporters.

In his concession speech, Mr Guy said he was “immensely proud” of his party’s gains despite the disappointment he described on the overall loss.

His belief in “a huge future electoral opportunity for the Liberal party” was reiterated in his resignation statement.

“I want to put on record my deep appreciation to all the Liberal and National party candidates, their campaign teams and volunteers for the tireless work they have done, particularly over recent weeks.

“The respectable statewide two-party-preferred swing to the Coalition of 3-4% was most profound in the exceptional swings to the Liberal party in Melbourne’s north and west.”This is the second consecutive loss for the Victorian Liberals led by Matthew Guy, with Mr Guy resigning a few days after the 2018 election defeat.

In September 2021, he replaced then leader Michael O’Brien amidst a leadership spill.