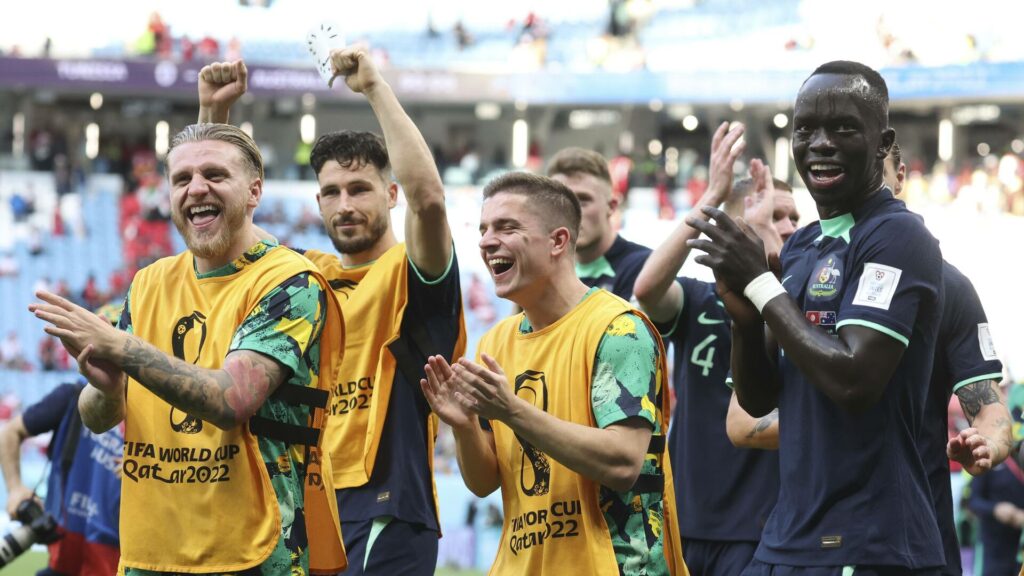 The Socceroos have boosted their odds of progressing to the next round after recording their first World Cup win since 2010 against Tunisia.

Australia defeated their opponents 1-0 on Saturday evening (AEDT) in a hard-fought, scrappy contest, setting themselves up perfectly for a final group stage game against Denmark which will likely decide who advances to the round of 16.

The Green and Gold went toe-to-toe with the Tunisians from the first minute, matching their intensity and aggression for the entire clash.

The Aussies found their breakthrough 23 minutes in after a cross from Craig Goodwin deflected off a defender and into the path of striker Mitchell Duke, who expertly headed the ball behind himself into the bottom right corner.

Tunisia posed significant dangers throughout but the defence stood firm, led well by centre half Harry Souttar who stepped up crucially with some excellent blocks and tackles.

The Australians hung on to secure a mighty victory and their first clean sheet since their inaugural appearance at the tournament in 1974.

The result is particularly impressive for coach Graham Arnold, who is now the first Australian-born manager to win a match at the World Cup, though he did not want his team to celebrate their feat just yet.

“When I got the boys in a circle after the game, I told them: ‘I’m very proud but we have achieved nothing at the moment. We can talk after about a win that hasn’t been done for 12 years, but we’re here to go as far as we can go,” Mr Arnold said to media post-match.

“It’s about sleeping well, recovering well and getting the mindset ready for Denmark.”

In the other game of the group, the Danes fought fiercely against France on Sunday morning but ultimately fell 2-1, thanks to a brace from PSG superstar Kylian Mbappe.

The result sees Denmark go into the final group stage clash needing to beat Australia in order to steal their spot in second and qualify for the knockout stages.