From the Temple of Poseidon to the stadiums of Doha: The Humanities and Human Beings

Joel Christensen looks behind the monuments, of Ancient Greece past and tries to imagine the lives of the countless slaves and poor used to create them 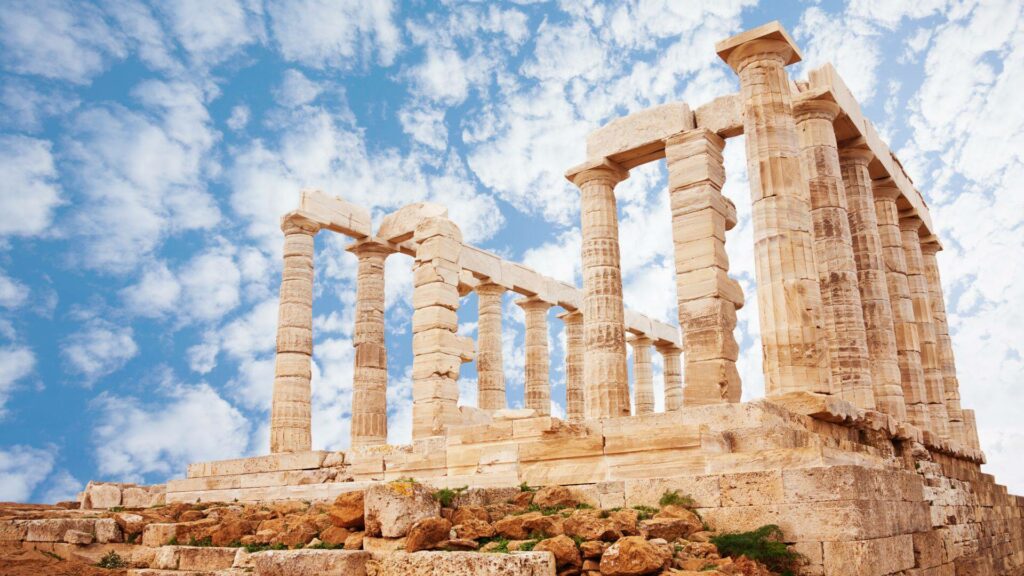 The temple of Poseidon on cape Sounion, just south of Athens. Photo: Depositphotos/sernovik

Back in the days before the COVID-19 Pandemic, I made my first pilgrimage to Athens to mark my 40th birthday. It used to be something of a regular joke, that someone like me who had already dedicated half of my life to studying the literature of Ancient Greece had never actually been to the modern country. My parents never had passports and could never afford international travel; but I had put off the trip in part because my training in the world of texts and language deemphasized the places and the people who had produced them.

We braved the August sun to climb to Acropolis; we took a bus to wander around Delphi; and we rented a car and drove south in Attica to Cape Sounio to see the Temple to Poseidon, so striking and famous on its promontory that Lord Byron had left his initials chiseled into its ancient stone. And as I stood there, I was breathless as I tried to imagine the human labor to excavate, shape, and haul so many tons of stone to so distant a piece of land.

When we stand on the foot of the cherished monuments of antiquity, we too often overlook questions about who built them and why. Much of the information is there, if we look hard enough, but few of our histories and fewer of our tourist guides ask the questions of many modern archaeologists: who quarried the stone, who moved it, what did they eat, where did they sleep, and what did they think of this fantastic labour?

The remains of the temple visible today are part of a Classical building erected during the years 444-440 BC during what we now refer to as the period of Periclean Athens over an archaic temple whose foundation likely dates to the 7th century BC. The Classical construction was the continuation of a building program throughout Attica, showcasing the wealth and power of Athens, dating back to before the battle of Marathon.

The buildings on the Acropolis are among the most famous examples of the Periclean period. We have extensive epigraphic evidence for the cost of the Parthenon, but it is intermingled with the costs of running the state and then the Delian league as the Acropolis was rebuilt from 447 to 432 BC along with the long walls from the central city to the Piraeus. The building program was funded, from our historical evidence, by allotments from the Athenian treasury to architects, temple taxes, spoils from war, and tribute from the Delian league. Athens’ allies, pressed into what many call today an empire although the extent of the importance of this tribute is debated today. Estimates range from the millions to a trillion dollars (if Phidias’ massive gold statue of Athena is included).

Temple sanctuaries accumulated massive amounts of wealth over time and would loan money to individuals and states: the Phocians were said to have taken at least 10,000 talents from the Temple to Apollo at Delphi.

Nothing about this wealth tells us about the people who did the work. Politicians who supported or opposed the expenditure, architects and artists who designed the work, and even some of the foremen who guided its progress. Modern archaeology can tell us more about the diets and deaths of the people of their time and from our sources we can imagine that some had decent lives but for others living in the past was, to crib from a more modern author, “nasty, brutish, and short”.

As someone who fell in love with classics because of its literature, I think I long considered my work separate from material concerns. No one has ever asked me what the Iliad or Odyssey cost, even as we as humanists argue for their value. Indeed, while the language we use to discuss epic worth is steeped in metaphors essential to capitalist ways of thinking, we nevertheless stop to think only infrequently about the relationship between how we value something and its cost in actual human life.

I have had to learn to think about the human labour implicit in the Greek texts I hold today. Even if we skip the original writing down of the Iliad and the Odyssey, hundreds–if not thousands–of human hands, both free and enslaved, were needed to edit, copy, and preserve these poems from Athens, through Hellenistic libraries, into the Byzantine Renaissance of the 8th Century AD, through to holdings in Venice, Florence and beyond. How does one estimate the generational cost of such texts? How do we acknowledge the human labour that has kept Homer alive today?

When we talk about where the Iliad and the Odyssey come from, we talk about oral composition and performance, dictation models, and notions of traditional singers learning to write and putting years of tradition down on a page (most likely papyrus rolls at first). Scholars like José Gonazález, Jonathan Ready, and Minna Skafte Jensen have looked at the problem from various angles in recent years, each in a different way acknowledging the complexity of pinning down a time and place for reasons of resources and skill.

We ask the questions about materials and costs because we want to solve the ‘Homeric Problem’ of where the epics came from. Yet our obsession with the problem of authorship keeps us from looking at the material conditions themselves.

After many years, it is clear to me that the Homeric epics should in some way be considered imperial achievements like the Temple to Poseidon at Cape Sounio or the new Parthenon on the Acropolis. Some kind of Homer existed in cultural spaces before the 5th century, but the political will, the human resources, and the funds were uniquely available then.

Papyrus and ink were not likely prohibitively expensive in comparison to the Parthenon, but early transcripts or dictations would have been costly in terms of time, and skilled labour (scribes). Economies of scale would have made copies affordable to some, but we cannot forget that economies of scale mean increased participation of nonspecialized human labour.

Who wrote down the Iliad and Odyssey? Were they enslaved or free? What did they think of the poems? Our tragedies as well were products of Athenian political will: there were annual funds to support the festivals that pitted Euripides against Sophocles and provided Aeschylus the opportunity to add a third actor to the stage. We need to acknowledge ancient literature as no less monumental than the temples that remain all over Greece. And we also need to think about the material conditions that brought them to this day.

Silences in the Past

Periodically, I quote online George Orwell’s reflection from his essay Looking Back on the Spanish War where he writes, ‘When I think of antiquity, the detail that frightens me is that those hundreds of millions of slaves on whose backs civilization rested generation after generation have left behind them no record whatever. We do not even know their names.’ Every time I do, someone brings up an exception like Zeno, Caesar’s ‘secretary’ Tiro, or Epictetus, defensively. For each named enslaved person from antiquity, there must have been thousands if not tens of thousands of women and children, of unskilled workmen, whose lives were spent (literally) in anonymity. We must add the number of the ‘free’ poor, who lived in systems of patronage and bondage, and all others whose lives were curtailed by the rhetoric of power and implicit if not explicit violence for stepping out of line.

I found myself returning to these thoughts while watching the World Cup and reading commentary about the enormous expenditure the Qatari government put into its building program. Most mainstream news outlets shied away from talking about the status of South Asian workers who provided the labour to make these games possible.

I understand this, because once you start asking that question, you need to face up to the asymmetries of wealth everywhere: the colonial wealth that still drives European banks and the stolen labour, lives, and land that made the United States possible. Even historical confessions cannot help us rationalise how American inequality makes our modern monuments to wealth possible through structural racism and the most extensive carceral state in the ‘free’ world.

It is heresy for someone of my class and position to say this, but how much has Western humanism taught us to value precious objects over human life? Our worship at the remnants of the past has trained us to see monuments as greater than the people who made them. When climate change protestors assaulted a Van Gogh earlier in the year, I found myself shocked at the hubris and then slowly changing my mind, wondering if the billions of dollars spent each year to move precious art from one household to another should not give all of us a lot more pause.

What do we keep on Battlestar Galactica?

Early in my teaching career, I used to use the television show Battlestar Galactica as a prompt for students on a final exam essay. I would propose that they are on a space ship fleeing earth for unknown destinations and that they have limited data storage space and I would invite them to argue to preserve something like the Homeric Hymns instead of pop songs from the 1990s. There was no right answer: many full credit essays argued the opposite.

But now, as we look at the very real threat of a climate apocalypse and the resurgent dangers of international war, I wonder how far my thought experiment just overshadowed a simple question: is a work of art worth more than a human life? As a Homerist, I want to argue for the crucial, universal importance of the Iliad or the Odyssey; yet, as a parent, could I ever suggest for a minute saving one of these poems instead of the life of a child?

What do the humanities mean if they don’t teach us to value human beings? Decades to come will force us to answer this question, one way or another.

Joel Christensen is Professor and Senior Associate Dean for Faculty Affairs at Brandeis University. He has published extensively and some of his work include Homer’s Thebes (2019) and A Commentary on the Homeric Battle of Frogs and Mice (2018). In 2020, he published The Many-Minded Man: the Odyssey, Psychology, and the Therapy of Epic with Cornell University Press.