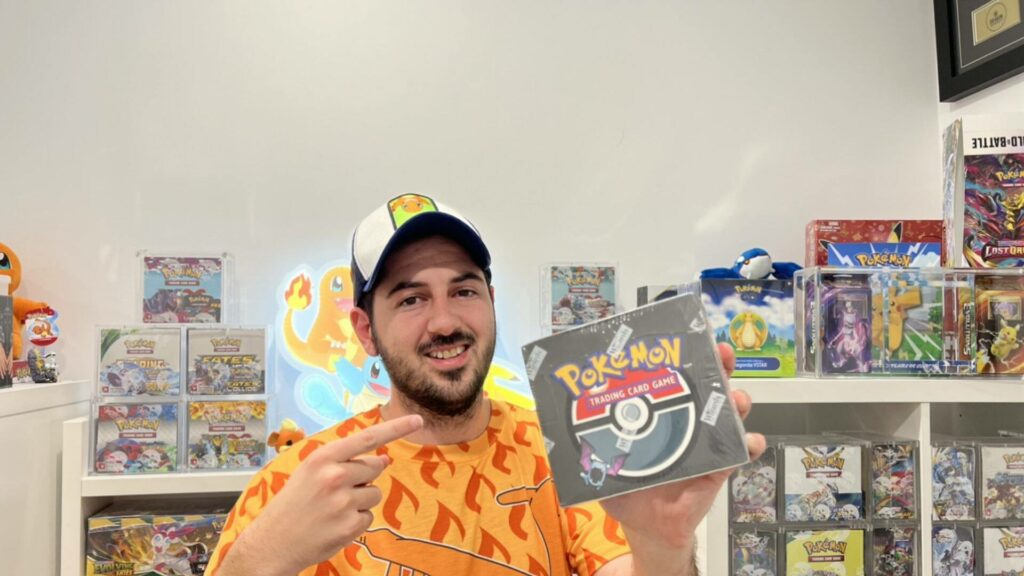 Is it possible for a pastime from your school years to develop into a sum of tens of thousands of dollars?

Well, this has become a reality for a Melbournian compatriot of ours, who managed to transform his passion for Pokémon cards into a profitable trade and can claim to be one of the biggest collectors in Australia.

It is the latter which has soared in popularity of late and this is where 27-year-old Greek-Cypriot George Tsiolas has created a name for himself in Australia.

“I started collecting Pokémon cards as a young child with my little brother. Back then it was just something we did for fun. We would go to the milk bar and buy these Pokémon packs, open them and trade them with our friends,” Mr Tsiolas told Neos Kosmos.

Pokémon cards surged once more into the public sphere in the last few years as people rekindled their interest in this passion, with the internet allowing this trend to blossom.

“The COVID-19 pandemic saw many people worldwide go back to their storages and find their old Pokémon cards, simply for things to do. This surge was created from finding others interested in trading. In the last two years, people in the Pokémon community have been very active in this regard,” said the Melbourne-born Mr Tsiolas who has created a business for dealing in collectables.

“There have also been a lot of high-profile individuals buying and selling these items. With the internet circulation of such information, came the resurgence of trading of Pokémon cards and the value that this could bring.”

The avid collector has amassed an overall pile worth approximately $100, 000 with his prized card being a Charizard 1st Edition, one of the most well-known in the trading card world and also his favourite as a kid.

Mr Tsiolas now engages in this hobby with the wider online Pokémon community through his YouTube channel “GOGI”.

“I love the people who are in this community, how they are so helpful, accepting of everyone, and this is where I believe I can make an equally as big a contribution, if not even bigger with all that I am doing with my YouTube channel and more,” the Greek-Cypriot said.

“It’s wonderful to have a shared vision, to watch a community evolve, especially here in Australia, and know that I have and am contributing to this. To see happiness in both adult and children’s faces when opening packs online and at the stalls is very rewarding.”

Mr Tsiolas is doing his part to contribute to the community of Pokémon in Australia and help spread it to the global audience.

“It’s fair to say that the Australian platform is not as large as those overseas, but this is where my goal setting is– to bring my collection, my work and the Australian Pokémon Community to an international level,” he said.

“I must tell you that I have followers and subscribers both from Greece and Cyprus which is very special to me,” said Mr Tsiolas whose Cypriot-born father is from Kontea and Australian-born mother originates from Athens.

Mr Tsiolas is a huge embracer of the idea of filotimo, something which he has incorporated into his Pokémon journey, and he aims to let that continue guiding him moving forward.

“As Greeks we always display friendship, hospitality, caring and giving and are always friendly to one another. This is something I will always practice in my daily life. Especially in the Pokémon community where I believe this kind of togetherness, community and filotimo exist as everyone is always trying to help one another.”

It is worth noting that according to sources on the internet, a highlight of one collection is a rare card that was only sold in Japan and is only one of four in existence: a Pokémon Illustrator card valued at more than $1 million.

Also, a near-mint condition vintage gaming card was sold for $900,000: the Pocket Monsters Japanese promo “Illustrator” holographic Pikachu card which was created in 1998 and was only released in Japan.

For standard cards, experts on the field claim that “though the individual cards may only be worth a few dollars at most, a complete collection of them can likely fetch a little higher of a price”.