“My Cypriot heritage has been an integral part of my writing journey,” says Maria to Neos Kosmos 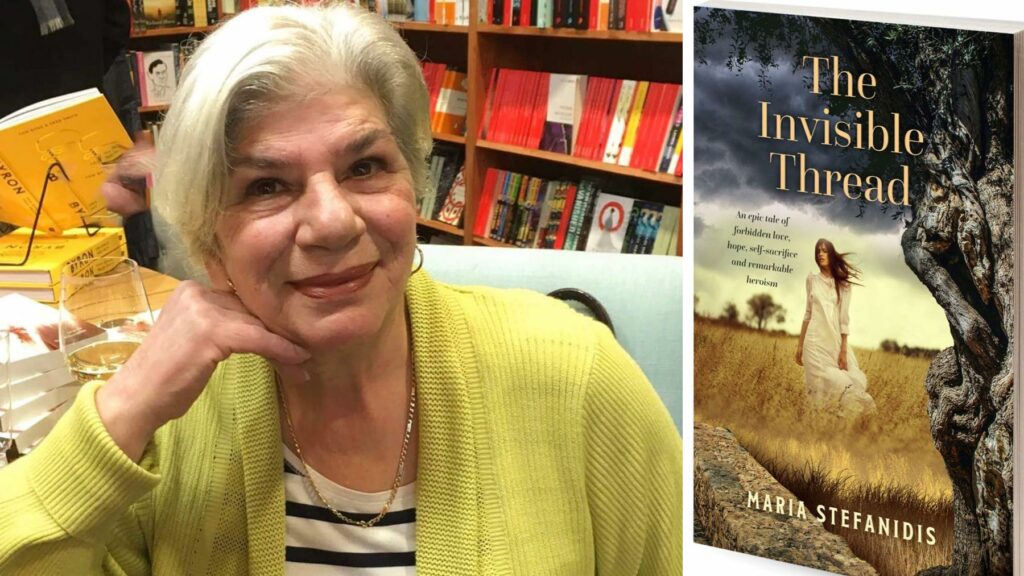 Despite the difficulties that marked her childhood years, being raised in Australia as a kid of Cypriot immigrants in the sixties, author and journalist Maria Stefanidis draws from this experience and pulls the readers into a narrative of conflict between Greek and Turkish Cypriots, with a touch of humour.

“I’d like my readers to experience the place, culture and era that I’m writing about, thus it’s important to keep the story authentic in dialect and character traits”, the author says, while introducing her new historical/fictional novel, The Invisible Thread, which is soon to be released.

The novel explores Cypriot culture and social behaviour through the inter-communal conflict between the Greek and Turkish Cypriots, during a time when the two ethnic groups were living as rival neighbours, in the heavily Turkish populated village of Rizokarpaso, located in the north of Cyprus.

“Overall, the book runs at 385 pages, and is interlaced with multiple twists and turns, unexpected surprises, intriguing characters both likeable and menacing and the witty humour is a subtle diversion to the melancholic parts of the narrative” adds the author.

“My Cypriot heritage has been an integral part of my writing journey. I’ve remained heavily acquainted with my birthplace since working and holidaying there throughout the years,” says Maria.

With her parents working seven days a week at their milk bar, and no friends, young Stefanidis struggled to see the “good life” that her parents pursued in a foreign country, while her relatives in Cyprus, seemed to have the potential of being happier making the most out of the little they had.

“Comparable to a vehicle that was designed and engineered in one country and manufactured in another,” the Cypriot author draws attention to the feeling of estrangement that a lot of children experienced in Australian society, being torn betwee two countries and two cultures.

Stefanidis resides in rural New South Wales with her husband and their blind dog. After retiring from being a cosmetologist and hairdresser, shwas able to dedicate herself to writing, while admitting that she was never academically inclined.

In retrospect, she connects the difficulties she went through as a kid of Cypriot immigrants in the sixties, with her academic failures. More specifically Maria says that during her school years, her inherited Mediterranean characteristics triggered discriminatory behaviour against her.

With a large inflow of Greek and Italian migrants, the Australians were not exactly friendly towards the “New Australians” as they called them.

It was a time when adversity, inflexible dogmas, and ancient traditions stood as barriers between practicality and realism, allowing corruption and neurotic behaviour to foster, which in turn negatively impacted the relationship of migrant children with their coevals.

The Cypriot author admits that “Times have changed as the social order has moved on accordingly.” She describes the modern-day generation of Greek Australians as “selfdirected, intelligent and ambitious” and recognises their drive to succeed academically, while breaking free from their refugee identity.

With a diploma of journalism in her hands, from the Australian College of Journalism in 2002, the Cypriot author reports that even though she completed a course of studies in the theory and practice of writing Best Seller novels, with the aspiration to write one, she claims that nobody can teach you how to write.

“I write with the ink that drops from my heart”, she adds and describes herself as a compulsive thinker, who processes her thoughts deeply, and is invariably in search for new ways to be inventive.

Maria also mentions that this educational experience, gave her the opportunity to “learn the knack of plotting, pacing and suspense, and character structure”, while highlighting the importance of sarcasm when writing, as it creates more depth and natural flow in the narrative.

Maria also tells us that her first historical/fictional novel, was published in 2015, which generated positive reviews, and adds that an ex-mathematics professor who tutored at La Trobe University, described her as being ‘phonetic’ meaning that she possessed power in her speech.

“For me, writing as in life, is all about achieving a moment of greatness,” says Mrs Stefanidis while revealing that she has written a series of books over the years, but has only published two.

“Prose is really all about freedom, for it enables the author to both explore and conceive without restrictions. For me it’s therapeutic. To even write one-well constructed chapter requires enormous discipline. If a story is to be successful it must have a remarkable impact on the audience, by way of originality, cultural significance, and literature merit,” Maria adds and hopes to add another book on her list, when inspiration strikes again!