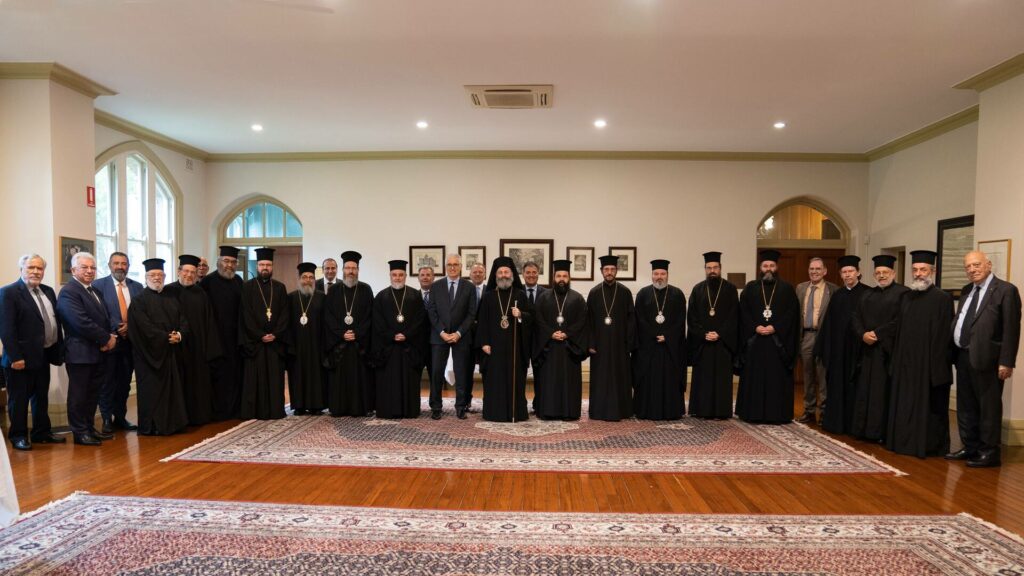 The Archbishopal Council of the Holy Archdiocese of Australia has founded a National Committee to organise the celebratory events for the Centennial Anniversary of the founding of the local Church. Photo: Supplied

On the evening of Thursday, 19 January 2023, a celebratory dinner was held at Le Montage function hall in Sydney to mark his Patronal Feast Day of which the proceeds will go towards the renovation of the Holy Cathedral of the Annunciation of Our Lady, in Redfern.

The Protopresbyter of the Ecumenical Throne Fr. Peter Mavrommatis conducted the evening that began with the National Anthems of Greece and Australia, which were sung by the choir of the Greek Orthodox Christian Society of Sydney as Master of Ceremonies.

Archbishop Makarios presented the progress of projects launched by the Holy Archdiocese in front of 1,500 guests, hierarchs, ambassadors, consuls and distinguished representatives of Australia’s political leadership, ministers and Members of Parliament, including the Prime Minister of Australia, Anthony Albanese MP and the Governor of New South Wales, Margaret Beazley AC KC, who represented the Crown.

In his address, the Prime Minister addressed Archbishop Makarios as his “dear friend” and wished him well wholeheartedly, while praising his personality and the work he has done during the last three and a half years at the helm of the Holy Archdiocese of Australia. “I have come to greet my friend,” Mr Albanese said, before noting that “What the Archbishop has found in Australia is a Greek community that constitutes an essential and exuberant part of this ‘blessed country’.”.

Mr Albanese then proceeded to stress that Australia without its Greek Community “is simply something we cannot imagine”.

“In turn, the Greek Orthodox Community has found in the person of the Archbishop a charismatic shepherd and a distinguished learned cleric. Orthodoxy in Australia is being reborn. Like his Patron Saint, Saint Makarios the Egyptian, the Archbishop is a man of vast knowledge and devotion to both God and the welfare of people. He exudes humility, service, kindness and concern for others, virtues that are the best that the Orthodox Faith has to offer. I remember what the Archbishop said when he arrived here, which touched us all: ‘from today until the end of my life I belong to Australia’,” the Prime Minister said.

The Prime Minister ended his speech referring to a historic event of the Orthodox Church in Australia, the blessing of the beginning of the work of the Federal Parliament for the parliamentary year 2022, held for the first time in a Greek Orthodox Church, at the Holy Church of Saint Nicholas in Canberra where he had read a passage from the 1st Letter to the Corinthians of the Apostle Paul: “Love is patient, it is kind. Love… does not rejoice in injustice, but praises the truth, always endures, always believes, always hopes, always endures. Love never fails.”

Repeating the words of Apostle Paul, Mr Albanese emphasised that “love, therefore, it is what holds this community together and love is what holds you together with your extraordinary leader, Archbishop Makarios”.

The guests further enjoyed traditional Greek dances by professional dance groups while the Archbishop awarded medals of “The Order of the Christ-loving” to certain individuals who stood out for their service and contribution to the local Church.