Bakoyannis: “A firm response to those who see the Balkans sinking in division and drawn apart by fragmentation” 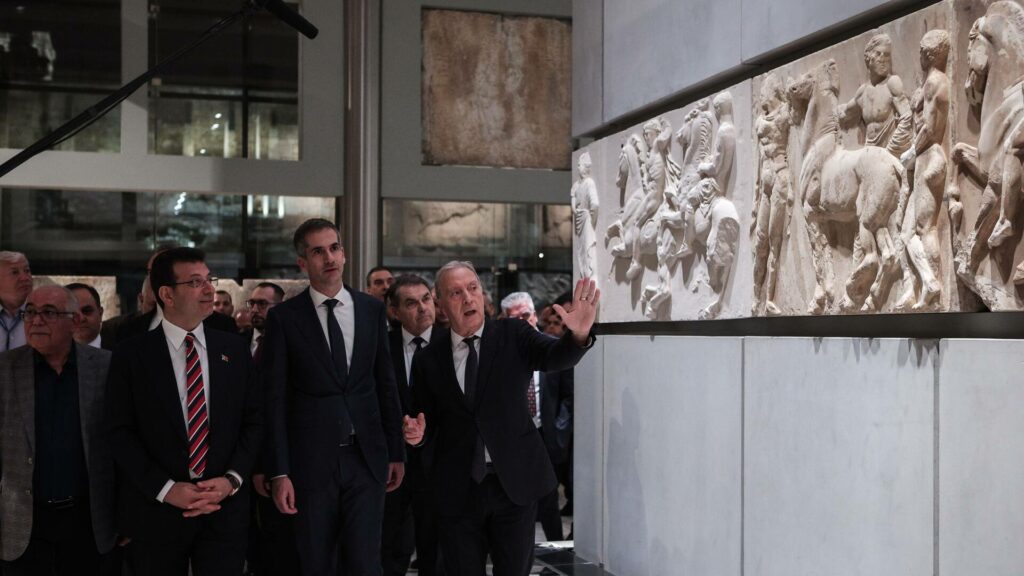 The Athens Mayors Summit of the B40 Balkan Cities Network began on Sunday evening (Greece time) with a symbolic tour of the Acropolis Museum. The Mayor of Athens, Kostas Bakoyannis, welcomed 69 mayors and city representatives from 10 Balkan countries. The event continues today Monday, when Athens will receive the Presidency of the B40 Network from the Mayor of Istanbul.

During the inaugural dinner at the Acropolis Museum, Bakoyannis addressed the distinguished guests. After warmly welcoming them to Athens, he spoke about the important role that the B40 Network plays in the stability of the region – especially in these turbulent, challenging times. He referred to the common vision he shares with the Mayor of Istanbul, Ekrem İmamoğlu, a year after they took the first steps to establish the Balkan Cities Network. At the same time, Bakoyannis sent a clear message to those who are cynical about the future of the region.

“69 cities from 10 countries. All standing next to each other, forming a compact fist and a compass. A firm response to those who see the Balkans sinking in division and drawn apart by fragmentation. We seek and breed solidarity, we lead together towards peace and prosperity,” the Mayor of Athens emphasised.

He also underlined the need for interdependence between the Balkan peoples.

“This is how we stay afloat and on course in these turbulent, challenging times,” he said.

“We all know it is easy to give in to cynicism, to turn inwards and get locked-in. To lock-out the need for connection, for bonding. Yet in reality, in our era we are all interdependent. So, if we do not support each other, stability remains unattainable.”

Bakoyannis underlined the importance of expanding the network for the development of cities and the prosperity of their residents. “It is an honor, a privilege and a genuine pleasure to welcome you all to Athens. A year after our common vision with Ekrem started to materialise, a year after we established B40. Our Balkan Cities Network is growing, in size and in importance. It is connecting the development of our cities and the wellbeing of our people. Grounded on our shared past, it opens the path for our sustainable, common future,” he noted while referring to the main purpose of the B40 Network, which is the exchange of knowledge, expertise, best practices and solutions for everyday social challenges, managing economic uncertainty, facing the climate crisis, strengthening the security of cities, reinforcing democratic institutions and protecting future generations.

Mayor Bakoyannis spoke with pride about Athens taking over the Presidency of the B40 Network, sending a message of unity to the people of the Balkans.

“Athens is honoured to assume the Presidency of the Balkan Cities Network. We hold high the vision of cooperation, the curiosity of knowledge, the need to share, the pride of being Balkan. We will move forward together, we will bolster our bonds, we will succeed.”

“The reunification of the Parthenon Marbles is a universal issue.”

During his speech at the Acropolis Museum, the Mayor of Athens echoed the appeal for the return of the Parthenon Marbles, stressing the importance of their reunification in Athens for the strengthening of democracy itself.

“Democracy is our common choice. It has a city of origin and a symbol of harmony. That is, Athens and the Parthenon respectively. If you may, I kindly ask you to have a good look behind us. There, stands the Parthenon, proud and wise, albeit incomplete. A hurt Parthenon is a failure of democracy. A waver on the universal duty to safeguard the integrity of the world’s cultural heritage. It represents exactly what we try with to put behind us with this initiative: egoisms, small interests, absence of justice.”

“The reunification of the Parthenon Marbles is not a Greek-British affair. It concerns not the relations between states. It is a major universal issue that shows how we all understand and treat Western civilisation, how we approach History, how we share common values and promote cooperation. It is the very essence of what a city is. This is why it concerns all of us here,” he concluded.

The Summit continues at Technopolis on Monday and Tuesday

The work of the Summit continues tomorrow, Monday 23 January and Tuesday 24 January at the Technopolis of the City of Athens. On Monday morning, Mayor Bakoyannis will receive the Presidency of the B40 Network from the Mayor of Istanbul, Ekrem İmamoğlu. During his opening speech, he is expected to define the vision for the Athens Presidency that will continue throughout 2023.

At the Summit, new members will join the B40 Network and interventions will be made by Dario Nardella, Mayor of Florence and President of the Eurocities Network, as well as the Mayors of Istanbul, Tirana, Sofia, Zagreb, Sarajevo, Podgorica and all other mayors in attendance.