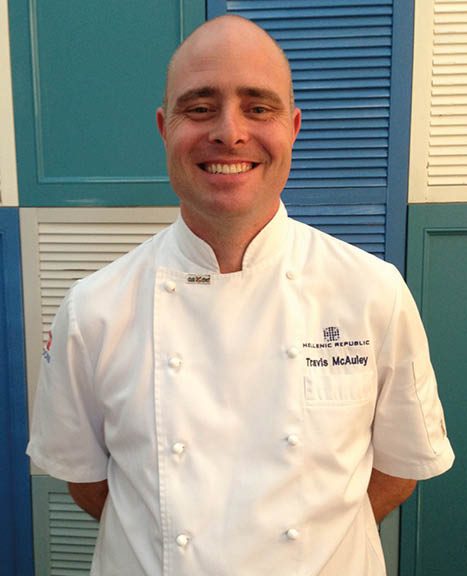 “That Aussie boy knows more about Greek food than Greeks do because he is passionate about it.” This is what George Calombaris had to say about head chef of Hellenic Republic, Travis McAuley.
For eight years, George and Travis have worked together. First meeting at John Psanis’ St Kilda restaurant One Fitzroy Street; the two then teamed up at Calombaris’ flagship restaurants The Press Club, and together they forged a partnership set to put their own spin on Greek food and cuisine in Australia forever. They have singlehandedly redefined Greek cuisine with their own signature recipes, and creative ideas and techniques used – George with his Hellenic background and Travis with this fire in his belly to learn all he can about Greek food.
Born and bred in the outer suburbs of Melbourne, McAuley earned his stripes working at Wild Oak Cafe in Olinda. With Stephanie Alexander prodigies Gary and Sonia Cooper at the helm, McAuley learnt how to create seasonal and produce driven dishes. After spending a couple of years mastering his cooking in London, he returned to Melbourne to work at One Fitzroy Street; the serendipitous career move that would have him meet a young and driven Calombaris. After two years of working together at The Press Club, McAuley went off to become the head chef at prominent Greek East Brunswick restaurant Hellenic Republic.
Travis knew there was only one real way to prepare to open up a Greek restaurant in the middle of Brunswick – a suburb in Melbourne’s inner north – and that was to spend time with the real deal – George’s mum. He spent time in her home kitchen, not to capture the essence of Greek flavours but to truly understand that Greek cooking comes from the heart, and is there to nurture the soul.
“I remember the first thing she did was show me her recipes but there were no measurements,” Travis tells Neos Kosmos with a smile. “She’d say things like ‘there, a matchbox size of this’, or ‘a handful of that’ or a ‘special cup of this’.
His relationship with Mrs Calombaris is close, very close. “You’ve just reminded me, I have to call her,” he says urgently and writes himself a note, “she hates it when I call up if I want things,” reminding me of a son talking about his own mother.
McAuley could not have had a better mentor than a Greek mother showing the Hellenic heart of Greek cookery, but he still experiments on these flavours and styles and creates a unique take on food. And keeps the dishes fresh and alive, yet always paying homage to their origins.
“We spend a lot of time taking classic recipes and trying to improve them,” he says. He walks me through the lentil soup fakes. Traditionally, it is made by combining ingredients in a large pot and essentially letting all the flavours come to the boil. A way McAuley has chosen to enhance the flavours is by adding his own twists to maximise the flavours, such as caramelising the vegetables, reducing stock, to intensify the flavour of the soup. Then there are twists on flavour combinations, like haloumi loukoumathes, or using modern techniques such as a deconstructed bougatsa served in a glass.
Their motto at Hellenic Republic is not to get fixated on the classics and to change them around.
“Take the village salad for example, it doesn’t have to be tomatoes, fetta, cucumber, it can be whatever is in season at the time – it could be asparagus, broad beans with home-made ricotta,” he says.
As a chef, McAuley has travelled to Greece many times to research and understand what Greek cuisine encompasses. He’s spent time with chefs there, learning new techniques – like his friend, chef Christophoros in Athens, who uses miso paste in melitzanosalata – and understanding flavours but also the true essence of Greek cooking – family, sharing, love and tradition; all the things he always tries to instil in his staff.
For him Greek food is purely driven by seasonal produce and he says that’s the way they operate in Greece, and that’s what he does at all the Greek restaurants of the Made Establishment group, including Jimmy Grants in Collingwood, Gazi (the former Press Club) in Melbourne and the new Hellenic Republic that will open at the former St Katherine’s venue in Kew.
“At Hellenic Republic, we print the menu every day,” he says, “we are at the fishmongers every morning and write our menu around what we buy.” He says this not only ensures that the dishes created are fresh every day, but it also keeps kitchen staff motivated and driven to not be locked into the same dishes day in and day out, and offers customers a variety and different taste every time they dine there.
“All the chefs [from the Made Establishments restaurants] catch up every week to share ideas and produce,” McAuley says, stating that all restaurants of a Greek background intertwine produce, creating a culinary harmony to the dishes.
For this chef, his adventures in Greek food hasn’t wavered. He’s still as passionate about the cuisine as he was when he started at The Press Club nearly ten years ago. And that passion stems from his love of what he calls his “favourite cuisine”.
“I love Greek food,” he says. “Simple dishes are always the best; a piece of grilled meat seasoned nicely, a really good Greek salad with amazing ripe tomatoes. I remember in Crete we ate some amazing myzithra that the ladies had made that morning. It was still warm when we ate it, and we drizzled it with honey and walnuts.
“It’s just simple food made with love.”