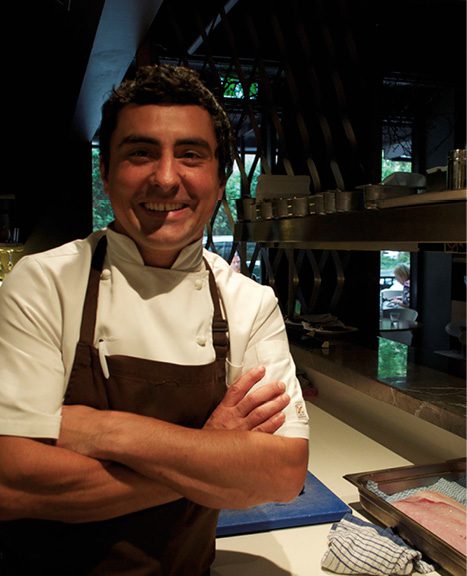 Melbourne chef Matthew Germanchis was well on the road to becoming a mechanical engineer. Yet while working as a kitchen hand, he couldn’t ignore the natural affinity he felt for food and the hospitality industry.

“Working with food, I could pick it up easily, I really understood it.”

Back in the early ’90s, when Germanchis was starting out, cooking wasn’t what it is today in terms of television and the stardom and celebrity that seem to go with it.

“It was a trade,” he recalls, “like you would be a mechanic or an electrician.”

Despite his parents’ protests, the then 20-year-old decided to defer university and give himself six months to try his hand at cooking. Now it’s almost twenty years on and he’s still excited about food. “There’s always something that brings you back,” he says. “It’s a little bit like a drug … there’s an addiction.”

Inspired by a host of things, from his upbringing to the articles and books he reads, environment plays a very significant role.

“If I walk past here and I see a lime or lemon leaf it’ll be in my head. I’ll come back to work and that ingredient will be in my head all day and I’ll say ‘I want to do something with that’.”

Born into a Greek family, the head chef was primarily exposed to cookery through his grandmother. Originating from Florina, the food she cooked was typical of northern Greece, with plenty of legumes, pastries, braises and roasts on offer. Exposing him to the concept of seasonal and regional eating from early on, this would inspire him in future endeavours.

“My enthusiasm and my feel for food really came from my grandma. She’s got an amazing sense of ingredients and environment, which really at a young age of cooking stuck in my mind,” he tells Neos Kosmos.

“Not necessarily looking at a recipe but feeling the ingredients around you and really taking what’s there; working with what you’ve got in your country and in your environment, rather than importing.”

Germanchis started his food journey at Cafe Grossi, where he was introduced to the basics of food and European techniques. Yet his yearning to develop a personal awareness of the ingredients in his own environment led him up north to Darwin, where he would finish the last year of his apprenticeship.

“Really it was about discovering food in my own sense,” he explains. “No one had really looked into native foods and I really wanted to have my own understanding of it.”

His travels through Australia further fuelled his curiosity, leading him on to Thailand, where a ten day holiday would turn into an eight month education on the ‘layering’ of food and flavours.

“Ingredients should sing on a plate. I am a true believer it will only taste better at the right time of year,” he says. “I’m not trying to break the mould in any way, I just want to use the best and give the best. I think the customer deserves that.”

And the best is what he is well on the way to becoming. Having opened its doors in March of 2012, the 100-seater restaurant tucked away on the grounds of the Sofitel Hotel has seen great success in a short period of time, awarded a Chef Hat in the Age Good Food Guide 2013, along with the title of Best New Restaurant.

This comes as no surprise, with Germanchis bringing an array of experience to the table, having owned his own restaurant in the Yarra Valley at just twenty-four years of age, after which he went on to work at a number of Michelin Star restaurants in London, including Heston Blumenthal’s The Fat Duck.

Boasting an impressive CV, including Prahran’s Pandora’s Box and Spanish tapas bar MoVida, it’s interesting to discover that above all else the Melbourne chef pinpoints the opportunity to live and work on the island of Skiathos as the true turning point in his culinary career.

Having travelled parts of Europe, Greece was a place he wanted to stay and understand. With a population of just over 6,000 people, Germanchis was able to really integrate himself and become a part of society.

“Up until then in my career I almost felt like a robot doing other people’s work,” he recalls. “I can cook, I can cook really well, but to have a personality about cooking really takes another step and I think Skiathos really brought that out in me.”

For nine months he ran a little taverna, learning to be creative with the limited ingredients the island had to offer, working closely with local suppliers.

“I really got a sense of cooking for life you know, and having fun about it. I would walk around the corner and there was my fish man, I would see what he had in the morning … that’s just how things rolled there.

“That really changed how I approach food now and how I try and teach the guys in the kitchen,” he says.

For Germanchis, it’s not enough to know how to cook well – knowing oneself as a chef and developing a personal style is very important.

“The hardest thing when I walk into restaurants is I eat the food and I think ‘Well where is the personality of the chef? Do I see it? Do I eat it? Do I taste it? Do I feel it?’.”

And he has achieved just that. Along with the help of his team of chefs, and maitre d’ Ainslie Lubbock (Attica), Germanchis’ presence can be felt – all it takes is one look at the menu. Taking simple ingredients, with an emphasis on seasonal and fresh produce, the menu that changes daily is a refinement of Modern Australian food and an attempt at presenting the best of what local food producers have to offer. “It really frustrates me that people are drawn to cuisines, whether that be Mexican or Spanish … you really limit yourself with ingredients in that,” he says. “But here at Pei I have no boundaries.”

Despite his exposure to success, both in Melbourne and abroad, Germanchis remains a humble man, personable and easy to talk to. At thirty-eight years of age he is well on the way to fulfilling his vision.

“I really thought that this was something I could apply academically to if I really understood the science and the background of it.”

Working with someone like Heston and quickly moving his way up the ranks, he was exposed to a more methodical approach to cooking, with intense research in the historical origins of ingredients and planning of menus months in advance. By exposing himself to different ends of the culinary spectrum, Germanchis has been able to adopt various methods, combining them to create an enviable final product.

It seems he is always on the move, thinking of how he can better himself not only as a chef and restaurateur, but also as an individual outside of the kitchen. When asked what he predicts will come next, he ponders for a moment.

“I see myself probably going full circle and just ending up in a small place cooking souvas, or something like that,” he says with a laugh.

Pei Modern will be hosting Tom Kime of Sydney’s Fish And Co. and Victorian wine producer Chalmer’s on Tuesday 11 March, 2014 as part of this year’s Melbourne Food and Wine Festival for a five course dinner. For further information or to make reservations phone (03) 9654 8545 or email reservations@peimodern.com.au