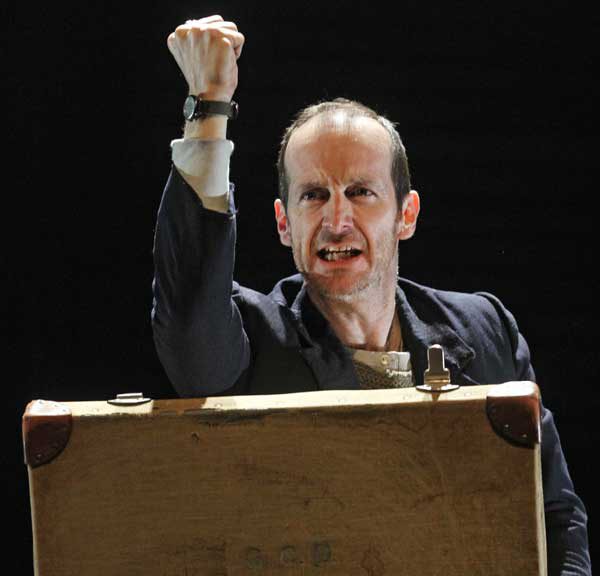 David O’Hare’s is our bard and he has come to our village, disheveled and worn – he’s been doing this for thousands of years.

He is anxious wandering around a sparse abandoned stage – “no not again I can’t do this” he pleads with us. But, we want him to! We want him to talk about that war, the defining narrative of all our wars, Homer’s Iliad, now dated 760-710 BC. Our rhymester, our singer, O’Hare, needs to drink to endure the this tale of war.

We want to relive the blood soaked sands of Troy, the burning of the great city, the bravery, the slaughter– it’s our story after all. it’s a Greek story, the story of our west.

We know our heroes, Achilles, Ajax, Hector; the arrogant Agamemnon and his weak brother Menelaus, whose wife Helen was ‘stolen’ by the cowardly Paris. We cry with King Priam as he begs Achilles, for his son’s Hector’s, body. We see the cruelty and fickleness of the gods, Athena, Hermes and Zeus who play with these men like a child plays with toy soldiers.

Homer’s Coat’s production of An Iliad is distinguished by its humanism, the ‘an’ makes clear that this is yet another retelling of Homer’s 2500 year old story.

“Where are the gods?” he asks, “Everywhere, in here, the gin god, tequila Athena”

Co-writer and performer, Denis O’Hare weaves between fragments of Ancient Greek, the lyrical poeticism of Robert Fagle’s English adaptation of Homer’s The Iliad and hilarious American argot. O’Hare is fervent, compelling and astonishing. The text he’s co-authored with his director Lisa Peterson is delicate, detailed, yet simple.

O’Hare, the versifier, is weighed down by the story of war he makes us see all the characters as human, full of blood, their faces no different to ours. At one point he conjures a photo of the aftermath of a battle, “Look bodies piled up, you’ve seen them before,” and he reels off names, not ancient Greek ones, current ones.

“This is Michael, he was nineteen, he was had a scholarship to Oxford, his father is postman, Michael was the first one in the family to go to university, now he’s not”

He makes us laugh, like the Ancient Greeks, at humanity’s greatness and weakness. Hermes, like a haughty gay New York fashion designer, guides old Priam through the Greek lines to beg for up his dead son’s body,

On stage, Brian Ellingsen supplies sparse, haunting, evocative sounds on a double bass, forming a call and response relationship with O’Hare. Not to different to those singing the Iliad in Homer’s time.

O’Hare succeeds in making our story relevant, our Greek frailty, our war, our eternal tragedy that propels civilization forward. The Iliad is about a coalition of free men, not slaves, who decide to go to war for values, love, hubris, confected outrage, greed and hubris. O’Hare’s adaptation juxtaposes that ancient band or men with the Coalition of the Willing, USA, Australia and Britain, that invaded Iraq in 2003 for equally scant reason.

This excellent theatrical production should not be missed.