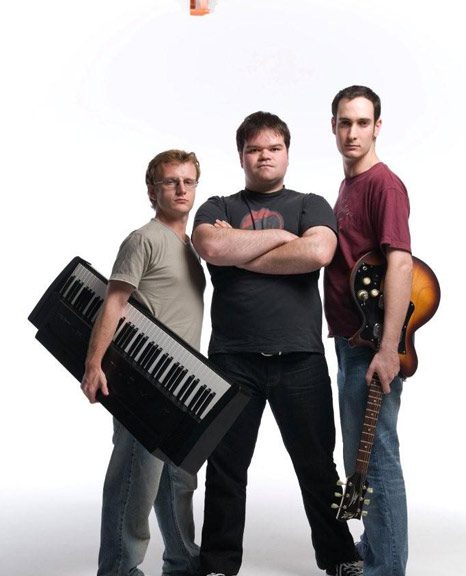 Jordan Raskopoulos, morphed as Rudd, raps at the ABC’s Q&A, as a dour Joe Hockey looks on trying to maintain a frozen ‘I’m ok with it’ smile, ‘…And I’m going to Copenhagen with my policies. If the Senate don’t like my environmentalism, They can suck on it and have a double dissolution… wooh yeah’

Axis of Awesome will be showcasing their Infinity Rock Explosion in Sydney next week. Raskopoulos acknowledges, ‘ethnic comedy’, but has dug out a solid trench in Australia’s tough comedy environment with little reliance on his ethnicity.

He secured his first nation-wide audiences in The Ronnie Johns Half Hour. As Pauli, (aka Raskopoulos  from Ronnie Johns,) the master of the malapropism would say, ‘being the Devil’s avocado’, I ask him if Axis of Awesome is not a disguise for some unfulfilled deeper urge to be a rock star? “No, comedy was always the passion and the focus for me, the band took off after my comedy, it was about trying a new thing.”

It is impossible not to make at least a comparison between Jack Black and Jordan Raskopoulos, at least in appearance – if not the use of pop-rock and comedy – but Raskopoulos is more nuanced and politically brazen than Black.

“Yeah, yeah, we have written a song about it” says Raskopoulos with a hint of irritation. “After every gig someone would come up and say ‘hey…. you know you look like Jack Black?’ so I thought the best way to address it was to write a song about it, ‘Yes, yes, I know, you’re not the first person to tell me'” responds Raskopoulos.

As a great character comedian Raskopoulos says that he has created new characters for Infinity of Rock next week. “We are adding genre stuff now so we take up personalities related to the genre like a smooth talking R&B character”

For Raskopoulos comedy is a meld of observations and ideas, “if you sit in front of a computer hoping to be funny, it never comes, funny things just hit you and you need to record it; that is why I live with a note pad and pencil and take it all in.” For Raskopoulos being a comedian was as he says, “a dream not an aim, it was a pleasant surprise.”

Infinity Rock Explosion by Axis of Awesome, is on Saturday November 14 – The Metro Theatre, Sydney For tickets call (02) 9550 3666 of go to www.axisofawesome.net