A psoriasis sufferer herself, Dr Irene Prantalos took her own personal healing remedy and gave it to the masses 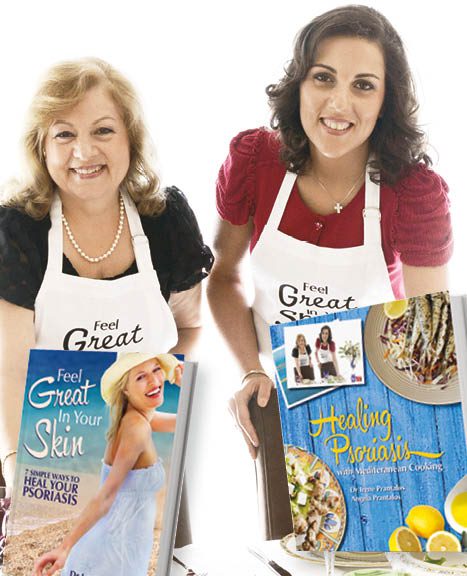 Dr Irene Prantalos was only eleven when she first discovered signs of psoriasis. On a trip to Greece with her mum, she noticed spots on her scalp. The spots started to appear on her body, so that by the time she was a teenager she was covered pretty much head to toe with the genetic ailment.

Dermatologists and doctors were all engaged to help her but to no avail. Treatments, cortisone injections and even hospital visits were a common occurrence in her teenage years to try and help with this skin problem. Even health farms, colonic irrigations and detox baths were had but nothing worked, until she tried Chinese medicine. Within a couple of months her skin got better. But she was combining this new found freedom with a solution given to her by her mum; using the Mediterranean diet to heal the skin.

She and her mother Angela would cut out certain foods, or replace others with whole foods to try and see for themselves what was irritating Irene. She says that and a combination of Chinese medicine gave her the relief from this life-long battle.

“Up until then I was pretty frustrated with the lack of benefit everything gave me; everything seemed to be a short term solution,” Irene tells Neos Komsos.
“Even naturopathy – as soon as I stopped it, the psoriasis would come back.”

At the time, RMIT were beginning a new course on Chinese medicine and Irene began her studies there. When she completed her course, she remembers not wanting to treat psoriasis initially; she couldn’t face people at that stage who were suffering the same way she knew all too well. But she noticed more and more clients were seeing her with this debilitating illness, and she knew herself how to heal them – for she had healed herself.

When she started, she noticed that her clients were complaining about a lack of food in their diet as Irene would treat them by cutting out certain food types. But what she noticed was that, unlike her and her mum, they weren’t searching themselves for alternatives. And that’s where this cookbook Healing Psoriasis steps in.
Launched on National Psoriasis Day last year, Healing Psoriasis is a cookbook put together through the recipes garnered throughout the years by Irene and created by her mother to help a daughter in need.
“My mum, she was quite innovative and when she’d cut something out, she’s replace it with something else,” says Irene. Together they used Irene’s knowledge of Chinese medicine and the beneficial elements of certain foods with Angela’s knowledge of cooking to create a bunch of recipes that can assist in healing the skin of a psoriasis sufferer.
She says the recipes aren’t a cure, they are just there for healing. People need to remember at all times that psoriasis is genetic and all sufferers are affected differently. And because bodies react differently physiologically, it’s really a case of trial and error to see what is happening and what foods will help you.
The cookbook has a 30 day lifestyle journal attached.

“It’s about empowering people to take responsibility,” she says.

“It is really focused on people becoming aware of what they can do to improve their skin regardless of what treatment they are doing.

She says that carbohydrates, for example, have been shown to create inflammation to the skin of psoriasis sufferers, so the recipes attached have a low carb content. Even legumes can cause a reaction so there are no legume recipes in the book.

“At the back of the book, all the ingredients in the cookbook are listed and what nutrients they contain and why they are beneficial for the skin. All the principles on how to eat and the diet and digestive system are all in the Feel Great in Your Skin book.

Most recipes are taken from the Mediterranean diet and are alternatives to traditional Greek foods such as spanakopita and moussaka. Irene explains that because the Mediterranean diet has extra virgin olive oil as its base, and fresh fruit and vegetables – all these combined have a therapeutic impact on the skin, and on well-being overall. Most other diets are made up of spices and they can generally cause a reaction.

“My mum used to cook the endives and I would drink the actual water it was boiled in because that’s where all the chlorophyll was, and the next day my skin was better,” she says.

Irene says so far she’s been asked to translate the cookbook into Greek, and might look into doing that to assist the first-generation sufferers but also new migrants from Greece. She says that if all goes well, there may be another cookbook on the cards but for now, she’s focused on getting out her message to heal psoriasis through healthy diet and living.