In that space where life can take just about any turn, Alexandra Stratou found herself in the kitchen. Now her cookbook – a collection of Greek recipes – honours family, uncompromised tradition, cooking and life 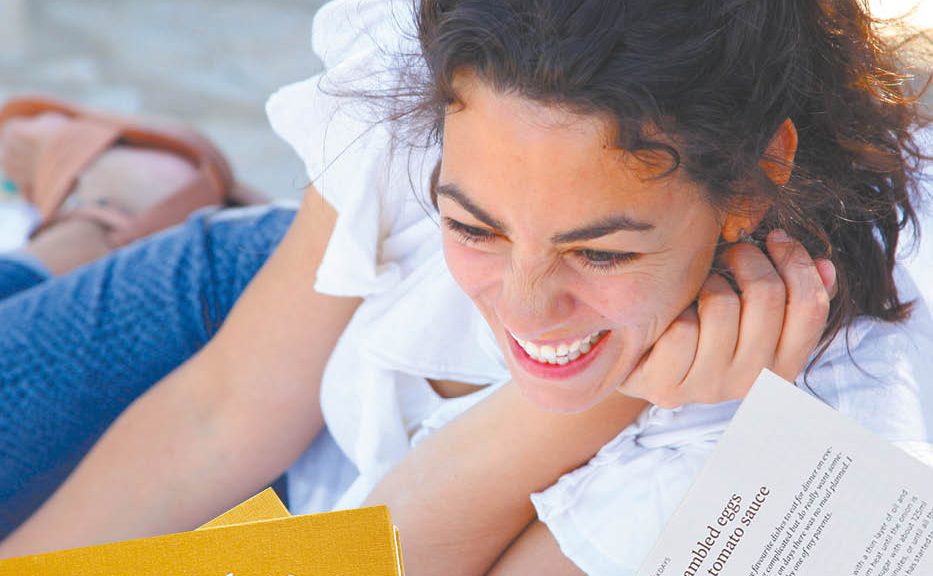 For three generations, Kyria Loula cooked for the same Athenian family. She was only 24 years old when she learned her first recipes from the family’s matriarch – the great-grandmother of Alexandra Stratou.

For decades – and the biggest part of her life – Kyria Loula would alter from one to another member of the well-off Athenian family, preparing meals for a week to come.

Her biggest fear was that she will be forgotten once she passes away. But with the cookbook Cooking to Share, written and published in December 2013 by Alexandra Stratou, Kyria Loula will be remembered even by those who never knew her.

The first page of the book reads: “Dedicated to Kyria Loula who cooked our food and to our Yiayia who taught us the importance of family.”

Alexandra Stratou is not your conventional Greek girl. Educated in English school in Athens, Alexandra continued her studies at Brown University, New York. It was at the end of the university that she started cooking with her roommate – with passion, each evening.

“I was introduced to all the potential and freedom there is in each of us to shape our own reality. It was here that I started cooking to share meals with others and where I first dreamt of using food as a medium to communicate and bring people together,” Alexandra tells Neos Kosmos.

It was only logical to her mind then, she tells today, that she learn how to cook professionally, so she embarked on the two year journey of cooking school, at Escuela de Cocina Luis Irizar, in San Sebastian, Spain.

What attracted her to the ritual that food encompasses was the fact that people would come together when they eat.

“I love the taste and I love cooking, but what I enjoy above all is the moment that we all take to sit down and eat.”
After having worked in eight different kitchens, Alexandra was back in Greece after seven years and with a negative reaction to the setting of professional cooking.

“I found the experience of working in a kitchen difficult and didn’t like the atmosphere in some cases.”

For a then 25-year-old with a dream to become a chef and open her own restaurant, this created some dilemmas.

Alexandra’s new job writing for a food website, which introduced her to the previously unknown potentials of the internet, lasted for a year-and-a-half before the effects of the economic crisis made her decide to leave her post.

It was then that Alexandra decided she wanted a more creative job.

“I decided I was going to raise money on Kickstarter in September 2012, to write a book. The thought was to see if there were other people interested in this book – I knew that my family would be happy if I collected the recipes and I knew I wanted to do it, but I didn’t really want to use any resources – like money, paper, or time – for something that other people wouldn’t be interested to have on the market.”

Not even Alexandra knew, before embarking on this journey, what it took to create a self-published cookbook filled with family recipes.

The project was fully funded within seven days of the Kickstarter campaign, and in the space of a month Stratou had raised over 36,000 euros, needed to create the 252-page book.

The book, titled Cooking to Share, appeared on the Kickstarter homepage as Staff Pick and was included in the Most Popular Project section on the website.

The first print of the book, which included an order of 1,400 copies in November of 2013, sold out fast and caught her unprepared, Alexandra remembers. The second printing was delivered in the first week of August last year.

“I think it’s a combination of being able to create the right situation and have a bit of luck and good circumstances. The way this book happened, it’s almost like it had a life of its own from the beginning. I would never have thought that so many people that I didn’t know would want to have it.”

Honouring family, uncompromised tradition, cooking and life, it’s a recipe book that guides the reader into the kitchen of a modern Greek family revealing their annual traditions, a respect for ingredients, and the important role the food we eat can play in building our sense of identity.

“In order to write this cookbook I asked many questions, heard many stories, talked to people inside and outside my family. Through sitting and thinking what I ate and when and what I remembered about each food, made me understand my life, what type of family I come from, what values we cherish. This process made me see what my roots are, not what they are supposed to be because I’m comparing myself with someone else. I went through this process and came out much more grounded. This is my life.”

In all, the book includes 104 recipes. Photographs and hand-drawn illustrations of the food, as well as the author’s own reflections about food and its ability to unite different aspects of a person’s life, accompany them.

“I never saw it as another Greek cookbook, because for me – and I think that’s the biggest difference – the whole book is part of my life, a personal thing, a family affair. It’s testimony to my need to go back to my roots, to think about my life, my past, and to do that through food.”

And as a core element of who we are, food is a great place to start a journey of self exploration, Alexandra says. The one that she embarked upon, while bringing this book to fruition.

“I think in the professional kitchen the food gets stripped of all this emotional part of it. I went back to my past and saw the way that I’ve been eating and that my family cherished food.

“I believe that it is vital to integrate the past you have known with the person you are now and the person you wish to be tomorrow. The food and the way we eat makes up a lot of who we are, it really formulates our experience – or at least did in my life.

“I always had the trouble of saying ‘I’m a cook’, or ‘I’m a psychologist’, because I don’t feel like I can be this one thing. But with this book I created something that is true to me in every sense of the word.”

Apart from the book being a collection of family recipes, it is also a sign of gratitude to Kyria Loula, Alexandra says. It was in her kitchen, in her last days, that Alexandra sat down writing the recipes now featured in the book and listening to her life stories.

“We all grew up with this lady making our food. I wanted to thank her for this, she was a huge part of our lives.”

The book Cooking to Share, by Alexandra Stratou, is now available at www.cookingtoshare.com