A+ for Alpha Restaurant

An interview with GM Vanessa Chant and chef Peter Conistis 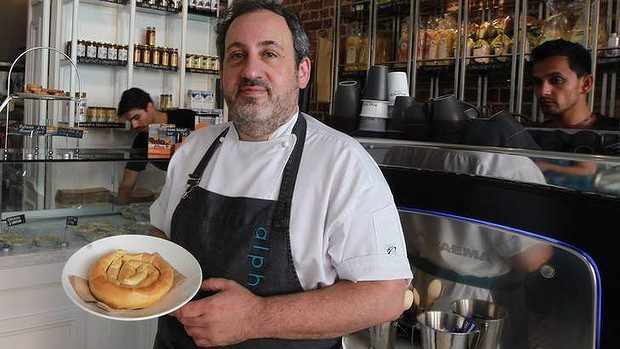 In keeping with the current renaissance of Greek eateries in Sydney, Alpha Restaurant represents the boom which shows no signs of abating following the nine decades old Hellenic Club of Sydney.

The club has been a venue for sharing experiences and preserving the Greek culture for new generations in Australia.

Alpha, which officially opened in 2013, is the new layer in this perspective, providing a multifaceted neoclassic dining experience.

Located in a historic Victorian setting in the heart of the CBD, the kitchen crew is led by well known chef Peter Conistis and his team.

They have developed an exquisite Greek menu that includes a range of classic and contemporary Greek dishes, spanning more than 20 years.

The restaurant is another example of how much Greek eateries have grown in Sydney and how well the public has responded.

Not more than a decade ago there were approximately 10 Greek-branded eateries in and around the CBD, not including those that were owned by Greek people without marketing them as ‘Greek’.

The number has now doubled as in Sydney, it is estimated that Greek diners are now in the top five (by volume) following the Chinese, Thai, Italian and Lebanese ones.

Tens of thousands of tourists visit Greece from Australia annually, who upon return go straight to seeking Greek food to revive great culinary memories.
Alpha appears to be doing well as it has its customers coming back and giving it rave reviews.

Gina Galati is one of the people who instantly fell in love with the eatery. Gina is of Greek descent, something that makes her a more demanding judge of Hellenic flavours.

“The marinated kalamata olives, tiropites and the supple crisp lamb are definitely worth the wait.”

Neos Kosmos sat down with GM Vanessa Chant and chef Peter Conistis to find out what makes Alpha Restaurant so special.

Bill Cotsis (BC): What experiences do you want people to take out of a visit to Alpha?

Vanessa Chant: For people to walk away from Alpha with all of their senses satisfied. At Alpha Peter showcases regional Greek recipes from his childhood, served with a modern twist. His dishes are testament to his innovation, yet they also retain a homely and accessible quality that makes his food appealing.

BC: Is there a dish you would recommend; and should anyone consider visiting during the times of the year when Orthodox faithful are fasting?

Peter Conistis: The moussaka of eggplant, with sea scallop and taramosalata. It is Alpha’s signature dish and totally suitable for the Greek Lenten diet. No meat, dairy or eggs are part of this classic dish.

BC: I know Greek eateries are big on their wine, are there some that you could suggest?

Peter Conistis: Anything that is native to Greece. Assyritiko is a white grape indigenous to the island of Santorini, a dry white wine that has citrus aromas and a minerally palate.

Vanessa Chant: Agiorgitiko, one of the most noble grapes of Greece, mainly grown in the region of Nemea Peloponnese is deep red in colour, an aromatic complexity with soft tannin.

BC: What is your capacity and how hard is it to juggle a busy night?

Vanessa Chant: Alpha Restaurant can accommodate 220 guests at any one time. Alpha’s private dining seats up to 34 guests, with catering for parties of ten or more. All guests are accommodated for, with two seatings on busy nights in order to keep up with demand.

BC: I hear chef Peter Conistis is amazing; anything you would like to add about him?

Vanessa Chant: We agree, Peter is amazing! Peter Conistis is a pioneer of Greek food, and will continue to get mouths watering with a new menu set to be released shortly. Most of the staff members who currently work at Alpha are Australian. Alpha would love to have more Greek staff on the team, however we have found it difficult to recruit people who are fluent in both languages.

BC: What makes you work in the industry, have there ever been nights when you thought, ‘that’s it, I can’t do this anymore’?

Peter Conistis: Working in a beautiful environment, serving amazing food, beautiful wine and having the ability to share that with as many people as we can makes the Alpha experience. Great feedback is what we thrive on. Some nights of course can be challenging, thankfully they are few.

BC: Is there a connection with the Hellenic Club?

BC: Looking at the restaurant, it has a unique design concept. Could you explain how the design came about and who was the genius behind it?
Vanessa Chant: The brief to our designer Paula Papadopoulous of DS17 was a look that evokes the feel of Greece in quite a minimalist way. We focus on the food and atmosphere but on entertainment as well.

BC: Are there plans for additional franchises, is there a ‘Beta’ planned to follow the success of ‘Alpha’?

Vanessa Chant: There are plans for a Beta bar on level one of the Castlereagh Street property. Watch this space to see what will be happening. We are very excited about it.

BC: What type of clientele do you attract?

Peter Conistis: We attract and welcome people from all walks of life – corporates, foodies, families and everyone in between. We are accessible and open to anyone!

Peter Conistis: We have a stunning stone wall with Greek letters and symbols inscribed. There are all sorts of stories that go around in regards to what it says – we like to say it is a draft of the first Alpha menu.

Alpha is open seven days a week for lunch and dinner and on weekdays for breakfast.

* Billy Cotsis is a freelance writer and short film director.