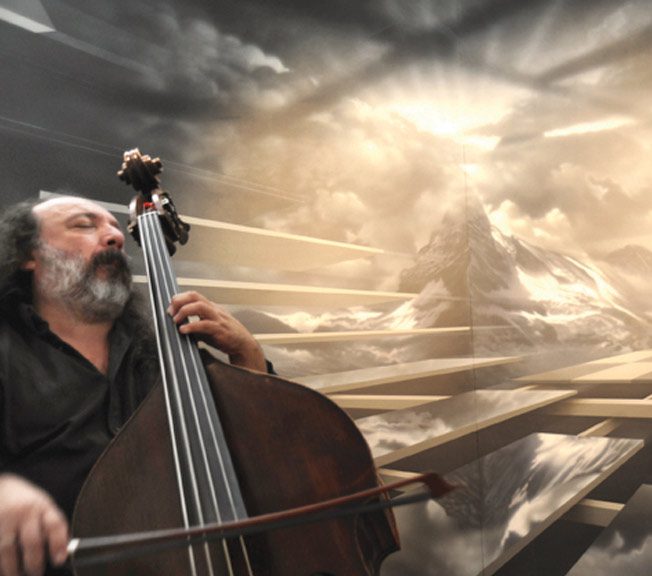 Local double bass player and modern art music composer Nick Tsiavos returns to the stage with the first of a two part concert series entitled Is this what you believe?

Tsiavos will be joined at the Forty Five Downstairs by jazz saxophonist Adam Simmons, percussionists Eugene Ughetti and Peter Neville and soprano Deborah Kayser; musicians known for their willingness and ability to search for transcendent beauty within the grit and dissonance of modern art music.

The ensemble will be premiering Tsiavos’s new composition Is this what you believe? over two nights of performance, one later this month and the second in July.

The composition, according to Tsiavos, “is an aural exploration and critique of the contemporary city which is set around the ideas of ‘the journey’, ‘the transfigurative possibility’, ‘the instability and epiphany that surrounds the moment’”.

Improvisation is an important element in Tsiavos performance and compositional practice, which creates both challenges and possibilities for the performers to explore.

“The relationship between text and performer can be as welded together as two metal plates might be, as slippery as oil between two fingers, as ephemeral as a fart in an elevator,” he elaborates.

”I am hoping for a deep, empathic, yet critical engagement.”

As a result the music can be challenging in turns, harsh, melodic, lyrical or abrasive; but above all it is about a finding moments of resonance and transcendance.

So it is no surprise that Tsiavos says “performance in real time, utilising improvisatory methodologies, can be a bit like riding a surfboard: exhilarating, lost in the moment…but you can also fall off!”