Greeks on the MasterChef menu 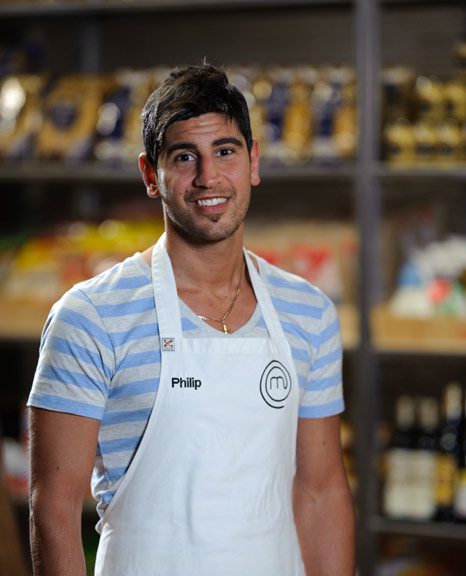 Phillip Vakos says that he cooks from the heart

MasterChef Australia contestants Peter Kritikides and Philip Vakos dodged the chopping board Sunday night to make it into the top 24 finalists. Already they have set the bar high. Kritikides, the 29-year-old from Melbourne, impressed the judges with his signature smoky Greek lamb blackstrap, feta and walnut salad dish, whilst 27-year-old Vakos was acclaimed by judge George Calombaris as a “partan Warrior for his unwavering determination to complete Episode Three’s elimination team challenge.

“They told me I didn’t have to do both dishes but I never gave up. I had the nurse bandaged up one hand behind my back and with the other I was making risotto and dessert-it was crazy.” – Philip Vakos Masterchef contestant

For those who missed it, Vakos’ team mate Andrea dropped out of the competition midway through the episode, leaving him to complete two dishes alone. Despite the set back, and a hand injury, Vakos managed to plate both his dishes before the other teams completed theirs.

“That would have to have been my greatest challenge so far,” Vakos reflects. “They told me I didn’t have to do both dishes but I never gave up.

I had the nurse bandaged up one hand behind my back and with the other I was making risotto and dessert-it was crazy.” An avid cook, the concept of food extends beyond aesthetic and taste for the Tasmanian jijitsu fighter who was raised by his grandparents.

Food evokes powerful memories; the vision of his grandfather in his backyard greenhouse picking fresh tomatoes for the family meal, and the smell of his grandma’s spanakopita backing in the oven.

“My grandmother taught me to cook as a kid- it was the only thing she could get me to do to keep me sitting still for more than ten minutes,” he reminisces fondly.

“When she passed away, she left me with her passion for cooking. That’s why I went on the show because I wanted to carry on her legacy of her traditional Greek comfort food.” Kritikides, like Vakos says his passion for cooking is heavily influenced by his Greek family and heritage.

The 29-year-old lawyer from Melbourne grew up idolising his mother and grandmother’s honest, generous cooking, which he has taken at its essence and incorporated into his own modern-Greek cooking style.

Kritikides is a genuine foodie; conversant on culinary trends, drawing his inspiration from local chefs including Stephanie Alexander, Andrew McConnell, and George Calombaris.

Pragmatic by nature, he admits that he may not have taken it to the ‘MasterChef’ level if a work colleague had not, “become fed up with me talking about what I cooked for dinner everyday” and downloaded a MasterChef application form.

“I have a pretty conservative life-I’ve gone to university, I’ve got a good job, and I work in a great firm so to do something so exciting and out of the norm, was a challenge that I’m glad I’ve taken to,” he says. Both Kritikides and Vakos aspire to open their own food business, following their time on the show.

Vakos will take inspiration from his cousin and mentor, John Rerakis, who owns the authentic Philhellene restaurant in Melbourne.

“I want to show people what real Greek food is about; not like the meat platters in a taverna but horta, frikasse, yemista, and all the food I grew up with as a kid,” he says.

MasterChef Australia airs on TEN at 7:30 pm, Sunday to Friday.