Calombaris’ little Greece in the heart of Williamstown

Hellenic Hotel, the MasterChef host’s latest venture, the first in Melbourne’s western suburbs, is officially open and it rocks George Calombaris’ newest restaurant in the heart of Williamstown, Hellenic Hotel (HH), is officially open as of today Friday 17 June.

The opening night, has been booked out since the announcement, however, Neos Kosmos, had a sneak preview and a ‘tour’ around the premises on Tuesday 14 June and it is safe to say we are excited.

“The pressure is on, and I’m still a bit jet-lagged,” George Calombaris who had returned to Melbourne three day ago told us, “but we are more than happy and proud to introduce Hellenic Hotel to Melbourne.” “It is our labour of love and hopefully you can taste Greece in every mouthful, while enjoying the ambiance of our new space.” The restaurant group Made Establishment was bought for $3 million in 2013 and was hoped to function last December. Indeed, after two years in the making, the former Hobsons Bay Hotel, is dressed in the Hellenic Republic style, yet retaining its Melburnian atmosphere.

We were one of the first groups to arrive, but within 10 minutes the place was bustling with foodies, critics and wine connoisseurs, and of course newly employed –yet perfectly trained– staff.

The service had us at hello. We got to our table and traditional Greek crockery inspired by the ‘mati’ (Greek evil eye charm) was placed in front of us, while a waiter was guiding us through the wine menu.

Starting with a 2014 Mitravelas ‘Red on Black’ Agiorgitiko from Nemea we moved on to selecting our starters.

We first fell for the seafood. A plater of 12 freshly shucked oysters arrived to immerse us into a true aquaculture experience. A fresh kiss from the Pacific, cured in Santorini vinegar and shallots; what more could we ask for?

Saganaki is a must-have when visiting Greek restaurants but the one we had takes fried kefalograviera cheese to a whole new level. It was cooked and served with apple, clove and black sesame.

“I’m glad you like it,” Mr Calombaris said. “Always looking for new ideas, getting inspiration from Greece, using the best products.”

“I’m a bit stressed, but that’s a good thing, I want to make sure everyone is having a great experience and understands what we’re all about.”

While waiting for our mains we checked out the downstairs dining area, which has the capacity to seat 100 people.

A open space, decorated with plants and with many windows to allow the natural sunlight to come in during the day and accentuate the white and blue hues. Indeed March Studio gets many thumbs up for transforming this iconic pub building into this three level Greek inspired venue looking over Williamstown Beach.

Meanwhile, a team of young chefs was preparing colourful dishes, headed up by Josh Pelham and Calombaris himself was doing table rounds, making sure everything was going smoothly.

It did not take long for the famous lamb shoulder to make its appearance, slow cooked in honey mustard, dressed in crispy kale and BBQ cabbage; literally melting in our mouth.

Another must-try on the menu is the Cypriot HH grain salad with pulses, nuts and herbs as well as the roast beetroot one, with sumac, yoghurt and pistachio.

We were also intrigued by a different take on the classic souvas, the ‘souvlakakia’ which contain crispy lamb’s brain!

Big thumbs up gets a traditional Greek seafood pasta dish. The squid ink kritharaki, with mussels and fennel. It was wolfed-down in less than five minutes. Fantastic.

On the dessert menu, we found two rather inviting descriptions.

The rhubarb risogalo (aka rice pudding) served in a jar with candied pistachio topping and the passion fruit loukoumades.

Definitely a 10 from us.

As inclined as we were to have more wine, we decided to put a comma, not a full stop –as we plan to visit Hellenic Hotel again soon– and check out the rest of the building.

“Downstairs is the restaurant and kitchen, upstairs there’s another bar, a balcony with tables and a large TVs for the footy and a great view,” Mr Calombaris explained.

“The terrace is not ready yet, but a look at the view will convince you. Up here, we’re only going to serve skewers and drinks.” “Hellenic Hotel will also offer a takeaway service for their food and beverages.” 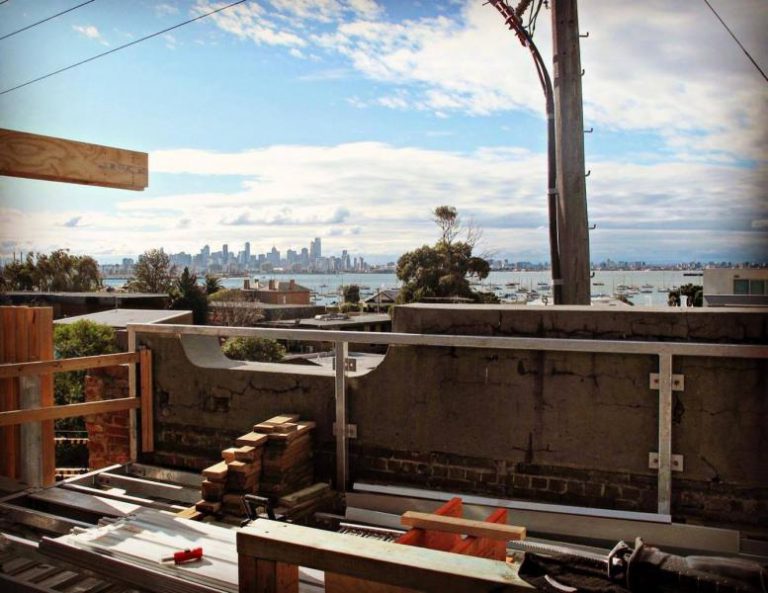 The terrace, still under construction, will offer a great view in the summer.

According to Mr Calombaris, HH will continue the concept of traditional Greek food with a modern twist, but in a more relaxed, Aussie way, constantly implementing new ideas from Greece.

“I was away in Greece, spent a few days in Athens and met with several young creative individuals from both the food and mixology scene,” he told Neos Kosmos.

“It’s inspiring what these people have accomplished during such difficult times. They have the best bartenders and mixology culture in the world, at the same time, modern Greek cuisine is exploding with flavour.”

“The food scene in Greece is light years ahead, a constant source of inspiration and motivation for me and my team.”

For the alcohol lovers; the HH drinks list contains a range of Greek and local beers, wines and spirits.

There is a wide range of Greek ouzo, at least 16 varieties of ouzo, featuring some of Greece’s rarest brands:

And some of the Greek wines on the list that caught our eye:

*There is also an interesting selection of Australian and French wines available, and local beer on tap.

The food service at 28 Ferguson St will be open for lunch and dinner seven days a week from 12pm till late.