A fat Greek lunch at the Press Club [video] Far-fetched as it may sound, when you’re growing up as a Greek diasporan, the expectation of getting married to a Greek, making lots of Greek babies, and “feeding everyone until the day you die” -a phrase often repeated throughout the My Big Fat Greek Wedding film- is somewhat ingrained in your personality.

That definitely was the case for, Fotoula, Nia Vardalos’ character in the legendary 2002 romcom.

It was certainly the case in the 2016 release of the sequel, too – spanning not one, not two, but three generations. Sometimes, there’s just no escaping your ‘Greekness’.

Long story short, a few days ago, we found ourselves having a rather indulgent Fat Greek Lunch, not cramped in Chicago’s Dancing Zorba’s but nicely seated at George Calombaris’ Press Club tables, like bees in a honeycomb.

Universal Sony Pictures Home Entertainment invited us to to celebrate the home entertainment release of My Big Fat Greek Wedding 2, all things family, food and Greek wine, over an intimate, bespoke three-course meal created by George.

Even though George is not married, he has two children and has also vowed to “feed everyone until the day he dies”, just not the Portokalos way.

In his most refined and elegant restaurant, the Press Club, we enjoyed imaginative, succulent dishes most of which were reinvented.

Having spent most of my adult life in Greece and being around cooks, I have come to the understanding that unless you know your Greek food from the elbow, your chances of fathoming George Calombaris’ interpretation of Greek cuisine can be limited.

There is a deeply-rooted misconception about what ‘traditional’ Greek food is amongst the diaporan Greeks, sometimes Greeks from Greece, too.

I used to be a Greek food Philistine for quite a few years, complaining that “I don’t understand modern chefs; I paid for a whole meal not a stain on a plate; that does not taste like my yiayia’s spanakopita; this isn’t how I get my souvlaki at Savvas’ in Monastiraki; that’s definitely not how I like my gemista.”

I would even get frustrated while eating something ‘different’ and even push the plate aside adamant that “That’s not Greek food. It can’t be.”

According to what I knew (we Greeks tend to suffer from a severe I-know-everything-listen-to-me condition), those foods weren’t Greek enough. But now I know better. 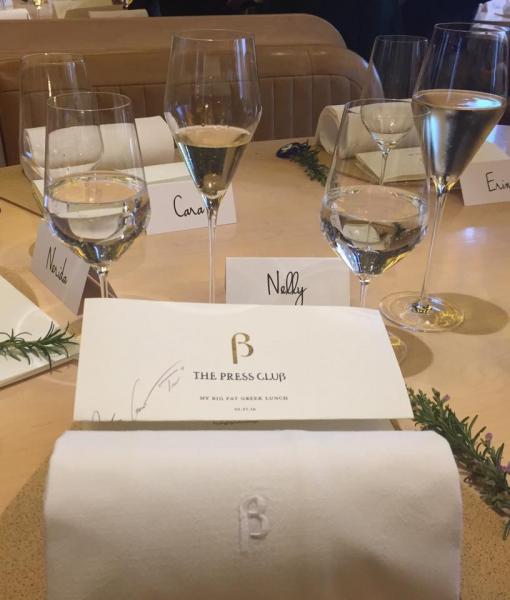 Hellenic cuisine, however, goes back all the way to the ancient years, the Minoans, the Mycenaeans, the Lesvians, the Athenian aristocrats of 500BC and so on. The combination of ingredients was based on seasonality and the effect that they aspired the food would have not only on the body but on the mind as well.

Taming the ego in order to please the guest’s senses, bringing out the purity of the ingredients and binding flavours, taking each new meal one step further was something our ancestors loved to do; fusion was no stranger to them.

Sweet and savoury notes often coexisted in a dish titillating as many sensations as possible.

There were many rules, but flavour-wise, every rule was made to be broken and every recipe could be reinvented.

Ancient Greeks also loved a bit of theatre in their presentation and even though they have a reputation of feasting for several consecutive days and nights, the actual quantity of food they consumed was moderate. Food was an experience, prepared in a ritualistic way.

“I opened The Press Club with a dream – my heart in the sun and my feet firmly in the kitchen,” said George, hoping we all had a “memorable food experience”.

“I think that’s what I was taught – the spirit, the power and the influence that food has on people and that’s the bit that I love and I love so much. It’s just an incredible, powerful, emotional, evocative thing that we do which is serving people and I love it and I think it’s so embedded in the DNA – the Hellenic DNA.”

“You know,” he paused, “I grew up in that environment where the house was always open and the door was always opened. People were always welcomed and the first person that would be welcomed into our house would be a stranger. I think that stipulates the Hellenic hospitality, so welcome.”

When seen from that perspective, it did not come as a surprise when the first starter of our meal – the tsoureki (traditional sweet Greek bread) – arrived filled with spicy, salty meat. It was actually the first time I saw a tsoureki with a filling other than chocolate and nuts. Interestingly, it was quite mouthwatering.

Next came another surprise; A bowl of crispy, savoury loukoumathes, served with tarama. Loukoumathes are a staple Greek dessert made of deep fried pastry puffs soaked in honey, sprinkled with nuts, cinnamon and sometimes chocolate. At the Press Club we enjoyed a reworked version which combined with the fresh white tarama dip (the way caviar sauce should be) made our taste-buds explode. Tarama, also known as taramosalata, is the salted and cured roe of the cod, carp, or grey mullet mixed with olive oil, lemon juice, occasionally garlic, and a starchy base of bread, potatoes or almonds. In this case, all I could taste was a fresh, soft, creamy and smooth paste which made me salivate even more. 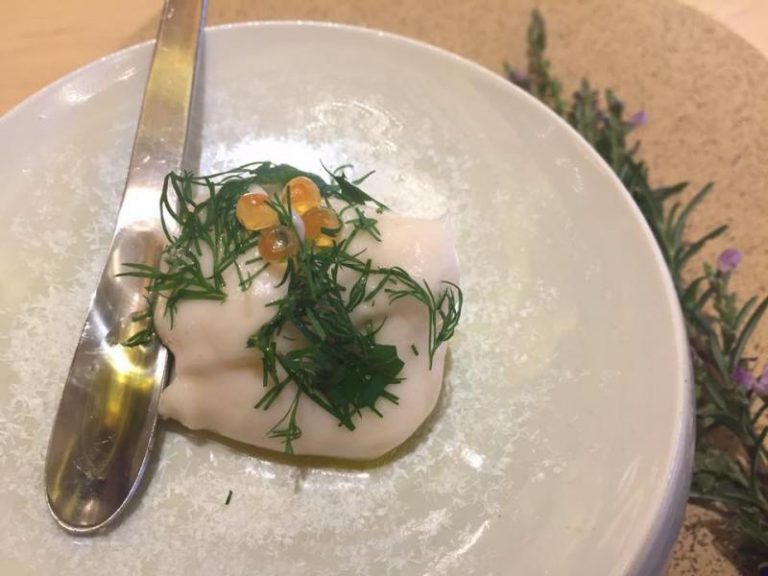 The starters were perfectly paired with a crisp and tangy 2014 Moschofilero, Mantinia. This is a still dry white wine with a surprising flowery (rosy) aroma and distinct citrus aftertaste.

Once we were done with the starters, an interesting take on a pork dish known as hirino pihto was served, garnished with peppers and basil. A succulent chicken in a lemon based sauce with green beans, broccolini and almonds followed to complete the main course. Each bite melted in our mouths while we enjoyed generous sips of a 2011 Daphe Nera dry red by Mercouri Estate in Cephalonia.

To finish, came the famous Press Club’s rizogalo, like a pink bomboniere on a plate. The traditionally white rice pudding was dressed in rhubarb with hints of licorice. Scrumptious pleasure, fit-for-the-gods but cleverly sized to make you ask for more. Our dessert was served with a slightly sparkling honey-ish moscato and coffee, while Calombaris himself was blow-torching petit fours served on tiny clothes lines for every table. On the aplostra (clothes hanger) were clipped Turkish delights, fluffy marshmallows and chocolate slices. 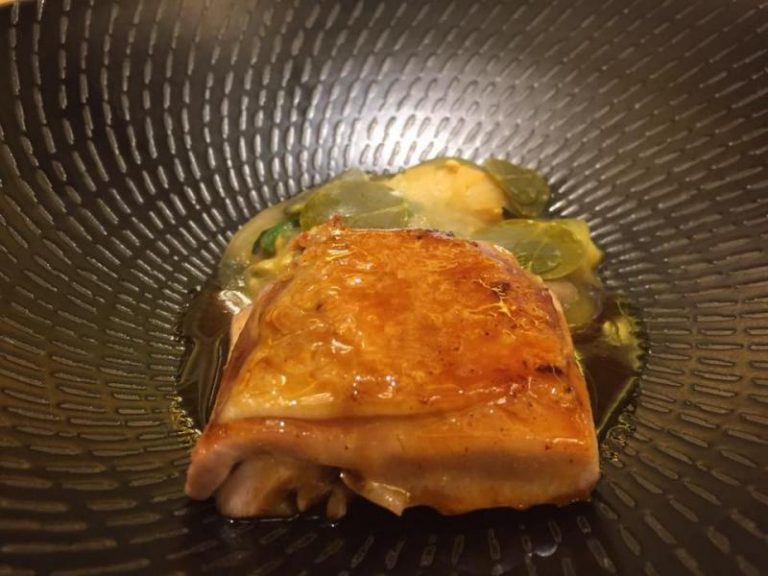 “I get to Greece once or twice a year. It’s my inspiration, it invigorates me, and it gives me new ideas to bring back to Australia and translate on my menus here,” the MasterChef judge continued.

“Contrary to what people believe, amidst the crisis and recession many decent businesses are springing out, especially on the food and bar scene. Young people try harder, they are more creative – innovative even. In Greece, and especially in Athens you’ll find restaurants of the highest standard delivering an amazing experience. We have a lot to learn from them.

“Greek cuisine is elegant, is beautiful and deserves a place at the top which is why I feel this pressure to constantly learn, and evolve and push myself, not rest on my laurels. Pressure for me is a driver, makes me more creative, makes me want to evolve and introduce all things Hellenic throughout Australia.”

Watch the video below: