Before this month you needed to get to Albert Park to sample the best burger in Melbourne, but now if you’re anywhere near the Queen Victoria Market, getting your teeth into an Andrews Hamburger has become a whole lot easier.

“So many times I’ve said ‘let’s open up another store’. We just saw this site and thought let’s bite the bullet.”

At around 120 square metres the new store, decked out with a slick interior fit, dwarves the original, combining a retro ‘diner’ feel with chic contemporary lines, a cool black and tan colour scheme, and more than a passing reference to traditional grill restaurants and milk bars that once graced most Australian towns and cities.

Greg’s Albert Park business dates back to 1939 when the burgers it sold cost a shilling and threepence each. In 1957 Greg’s uncle Andrew Georghiou took it over and passed it on to his nephew 12 years ago.

“Fifty years ago a burger store like Andrews was the norm,” says Greg. “They were stores with a Greek or European background serving great honest food.” 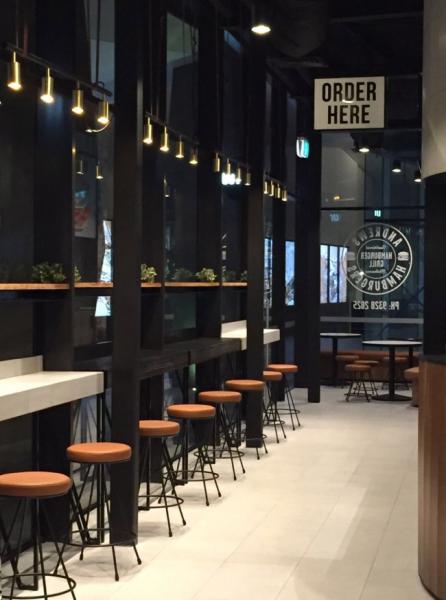 For Pappas, who graduated from RMIT with a business marketing degree, with the high street saturated with the mass-produced homogenised fare of McDonalds, Burger King and the like, the key to his business’s success is tradition and quality.

“Time has passed and we’re a rarity now, but we’re a niche market where customers know they can get a good old Aussie European burger.”

With the Franklin Street shop attracting new customers each day, Greg says anyone looking for a job in Melbourne’s finest burger emporium should call by.

“Pop in or give us a call. You get free training.”