A must-do when visiting the Greek capital Botrini’s is a Michelin-awarded restaurant located in Chalandri, Athens, bringing gastronomy closer to the people of the Greek capital, with respect to seasonality and the quality of indigenous products.

The restaurant has been awarded two Michelin stars and for three consecutive years it has received the Golden Chef’s Hat for its mouth-watering dishes that highlight the advanced culinary techniques of their creator. Botrini’s is both a topical and modern restaurant, combining quality and good prices with inspired, playful and unpredictable dishes.

“This restaurant is the realisation of one of my oldest dreams,” says chef Ettore Botrini, who was born and brought up in Corfu.
“It materialised as Botrini’s Project, a successful television program by the same name on Alpha, with the participation and total support of the channel. It was created for the intention of opening up a road to cooking for young people who were seeking a career opportunity in their lives. Those who believed in my project are with us today working side by side in Botrini’s kitchen.”

His dream, however, was far more complex, stemming from a belief that one of the greatest pleasures in life is the sharing of food with those you love. 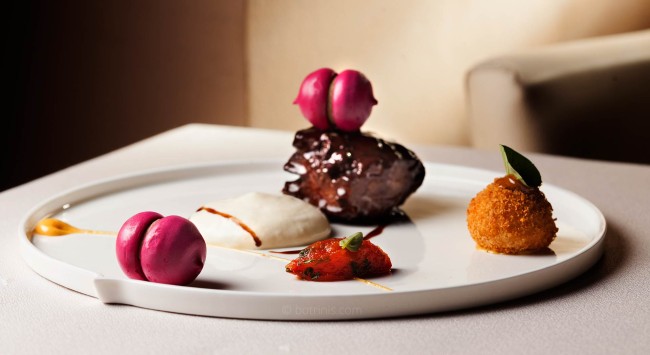 The Corfu-born and raised chef knew from an early age that he wanted to work with food and went down the same professional path as his father Etrusco Botrini. He grew up in a family where food was something sacred, with every meal prepared meticulously and with love, bringing loved ones together.

“I always believed that one of the greatest pleasures of life is to share food at a common table with friends and loved ones,” Botrini explains.

“For this reason I wanted to create an affordable restaurant that would bring gastronomy closer to people with due respect to seasonality, quality and the indigenousness of my raw ingredients.”

In order to materialise his ambition, Ektor did not just take over the family business but used his father’s experience to learn everything from scratch.

From 1986 to 1992 he received training and worked alongside him in numerous MED Clubs all over the world. Over the next two years he worked in the family business, the award-winning Etrusco restaurant in Corfu, among the best restaurants in Greece and with continuous upward rankings from food guides.

“Don’t think working for my father was easy. I’ve been fired by him 18 times,” he confesses.

“My father is a much better cook than I am but he is a perfectionist to the point where nobody can keep up.” It was the following year that the chef decided to embark on his own journey of self-discovery, continuing his training in various Michelin Star-awarded restaurants in Monaco and France, followed by his return to Corfu in 1999 in order to take over as the head chef of Etrusco.

Botrini believes that the moment a chef stops learning and training he starts compromising the quality of the food he serves, as there are always new techniques, more recipes and ingredients to add to a menu.

Staying true to his values, in 2006 he made the decision to move to Spain, where he attended a number of seminars in molecular cuisine and completed a three-year practical course next to the acclaimed three-star chef Martin Berasategui, who is now one of his closest friends.

Returning to Greece, the chef began putting his experience and ideas together, into establishing his own namesake restaurant in Athens. Botrini’s opened its doors in 2011 in a detached house in Chalandri, surrounded by a beautiful, tranquil terrace.

Adhering to minimal aesthetics, it offers comfort and discreet luxury, comprising different floor levels which give visitors either the visual perspective of the yard and the terrace or that of the kitchen and the foreground of the chef’s gastronomy feast. The project is completed with the exterior yard, the terrace constituting a cool oasis on warm summer nights.

The basic food concept revolves around combining dishes bearing his signature with others that are simpler, so that guests are given a gastronomy tour and ‘training’ at affordable prices.

“The restaurant’s menu is quite flexible, allowing everyone to choose according to their mood or budget from the a la carte menu, the fixed menus or even the degustation menu,” Botrini explains.

Within two years, Botrini’s deservedly won two consecutive Golden Chef’s Cap Awards. Many more followed, with the year 2014 marking a new era for the chef, who received his first Michelin star in the famous guide for main European cities.

The chef himself dedicated it to his team as well as to all his associates, who worked with him for years both in the kitchen and the dining room with enthusiasm and love, following his personal vision for culinary art.

The family restaurant in Corfu also got its first Michelin gong in 2015, giving both Ektor and his father a long-anticipated validation. The second Michelin star for Athens came a few months ago from the Michelin Guide Main European Cities 2016; no surprise for anyone following the multi-awarded chef and his intricate creations.

“I’d love to return to Corfu and spend six months a year on the island doing nothing but fishing,” he says, looking back on his childhood memories from the Ionian island where he used to walk around barefoot in the summer and smell the peaches in the air.
“Opening a cooking school with many cooks who would exchange information and share their experiences is also an idea, but not yet. It would feel like an early retirement.”

When in Athens, a stop at Vasileos Georgiou Defterou 24, Halandri is essenstial. For bookings call +30 21 0685 7323 or visit www.botrinis.com/contact