Fotis Kapetopoulos explains why mainstream political leadership should not err on the side of caution, or of subtle rejection and politeness to the views expressed in One Nation 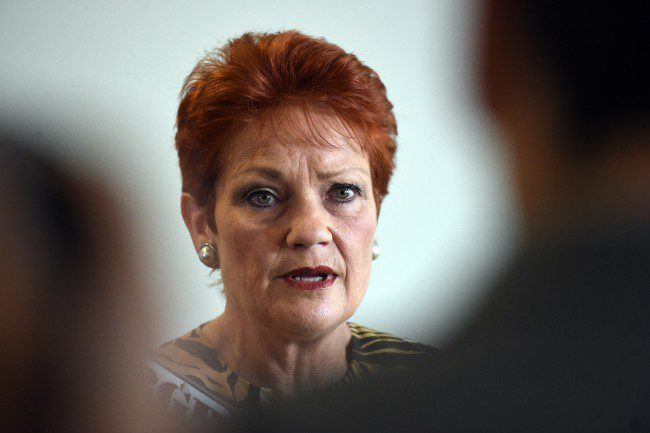 Wednesday’s Essential Research poll found that 49 per cent of “Australians support a ban on Muslim immigration, including 60 per cent of Coalition voters, 40 per cent of Labor voters and 34 per cent of Greens voters.” The fears guiding the responses were “terrorism”, and the view that Muslim migrants do not integrate into society nor share Australian values.

A day before the poll was released I called Dr Nick Economou from Monash University to gauge a response to my political anxieties. I was angry, not uncommon, given I’m a middle aged ‘white’ man. I’ve never been sure of how ‘white’ Greeks and other Southern Europeans are especially when racism is inflamed. The word ‘wog’ has been hard wired to my psyche and behaviour as it must have in others Greek migrants and their offspring here.

Economou assured me that Hanson is more of a magnet for those disaffected by mainstream parties and One Nation’s hard-core constituency was far smaller than suspected.

According to him, “She would not have gained those seats if the Prime Minister did not call an election.

“In 1996 she had greater share of the vote and only won one seat, the threshold in this election was lower at only 7 per cent,” Economou said.

“According to Economou the more focus she has the more she thrives and in the end “she’s the Coalition’s problem they need to deal with her” especially as far as Labor is concerned.

If the Essential Research poll is a snap reflection on one day of people’s attitudes and the real number of people wanting to stop Muslim migration is surely less than 49 per cent, it is still significant. The 2015 Scanlon Foundation survey Mapping Social Cohesion found that “just 35 per cent considered that the immigration intake was ‘too high’, the lowest recorded in the Scanlon Foundation surveys” and that overwhelmingly most Australians felt multiculturalism was a positive thing.

Yet, given the acrid state of global affairs, the rise of Trump in the USA, rampant anti-refugee sentiment in Europe and Islamophobia, the terrorist attacks in France and Germany, the on-going war in Syria, instability in the Middle East, the resulting mass of new refugees, are events that coalesced to unnerve a lot more people in the West.

It is precisely why mainstream political leadership should not err on the side of caution, or of subtle rejection and politeness to the views expressed in One Nation. Hanson’s second maiden was like her first in 1996 when she warned that were are in danger of being ‘swamped by Asians’ only now, in 2016, it is the ‘Muslims.’

She has a right to free speech but does the right need to be treated with kid gloves? Politicians can take Hanson on with the full weight of invectives that they hurl at each other across the chamber. Yet when moderate liberals, for example like Michaelia Cash hugs Pauline Hanson after her maiden speech, as an expression “merely” of “good will” surely Hanson augments mainstream acceptance.

I suspect that Keating would have verbally eviscerated Hanson and shamed her followers through humour and intelligence. Even the ballsy panache of Kennett is important. He hunted her up and down shopping centre escalators in Queensland in 1996 and Hanson was terrified. Any human being would be terrified with Kennett after them. The stoic late-Malcolm Fraser, the man that abandoned his cherished Liberal Party due to their lack of humanity on refugees, would have sent her to the abyss with an icy stare.

The process of Hanson increased her legitimacy began when former Prime Minister John Howard and the then Opposition Leader Kim Beazley tolerated Hanson through nuanced rejection in an attempt to suggest to her followers that they were hearing them. Their desire to have the ‘battlers’ return to the two main parties guided their respective strategies, but now it’s more than battlers.

Recently Former Prime Minister John Howard also said that Pauline Hanson’s supporters were “disaffected with mainstream politics” and felt it was a “mistake” to “demonise her and demonise her supporters”.

Howard ousted Hanson from the Liberal Party in 1996 and in 1998 on the ABC’s RN he said of Hanson’s maiden speech: ” … it is not only an inaccurate, dishonest speech, but it verges on the deranged in various places.”

Some though have shown mettle recently. Penny Wong who did not to attend the Senate chamber for Hanson’s speech called for a resolute rejection of her racism; “Nobody needs to defend Ms Hanson’s right to speak,” she said. Liberal frontbencher Craig Laundy condemned her and former tennis champion John Alexander, now Liberal backbencher, was also strong in his condemnation:

“I subscribe to the Voltairean principle of respecting people’s right to say things that I disagree with. But when that speech uses broad-brush strokes to demonise an entire religion and all the observers of that religion it must be called out for what it is – it’s racism, it’s discrimination,” he said.

Hanson’s right to free speech is better leveraged than most of Australia’s citizens, she’s in the Senate, the apex of free speech. The Greens’ walkout on Hanson was dramatic and expected, but condemnation of Hanson by an erudite Prime Minster and the Leader of the Opposition as a bipartisan approach would be far more effective.

To be fair, Prime Minister Turnbull had a dig at Hanson and his own closet-Hansonite, George Christensen on 3AW: “Tagging all Muslims with the crimes of a few is fundamentally wrong and it’s also counter-productive.”

If some Greek Australians also feel some anxiety towards Muslim immigration it is important to reflect on what we ‘wogs’ were seen as once. The late-Professor Michael Tsounis in his 1975 Greek Communities in Australia writes, “anti-Southern European sentiments in Australia in the pre-War years ran high as a report in the newspaper Truth wrote in the mid 1930s, “…The muddy stream flows to Australia from Greece…and the Levant.”

Let’s not forget we were never that white to start with.